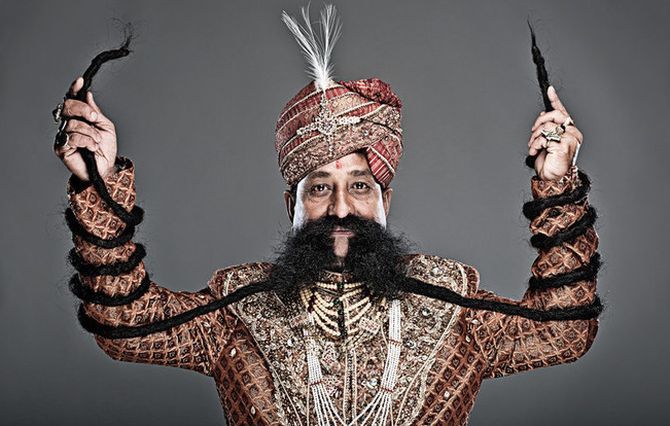 From wearing a turban made from 400m of cloth to eating drinking glass, Indians have done some really bizarre stuff to set a Guinness World Record.

Rediff.com presents some of the oddest Guinness world records held by Indians. The largest turban is made with 400 m (1,312 ft) of cloth and belongs to Major Singh, a Nihang Sikh who wears the tower-shaped turban using over 100 hairpins, and 51 religious symbols made in metal.

This style of round turban is known as a dumaala and is common to Nihang Sikhs. Most Nihangs wear a smaller turban than this, but there is a tradition of competing to see who can wear the largest. Major Singh’s 400 meter turban weighs around 35 kg. Nobody else is in his weight class, the next largest turbans are 10 kg smaller. 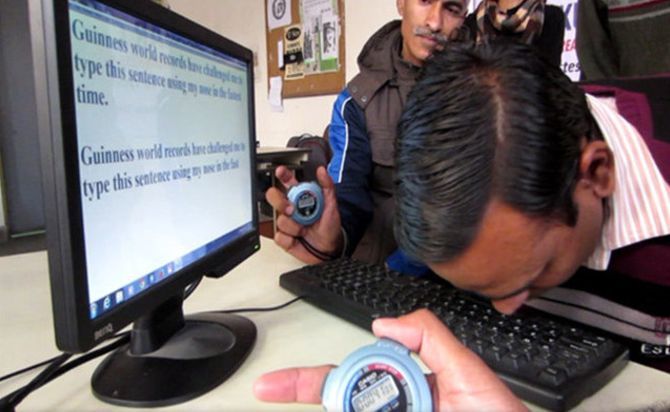 The fastest time to type a prescribed 103 character text on a keyboard using the nose is 46.30 seconds, and was achieved by Vinod Kumar Chaudhary, in New Delhi, on December 22, 2014.

The sentence that had to be typed was 'Guinness world records have challenged me to type this sentence using my nose in the fastest time.

The longest moustache measures 4.29 m (14 ft) and belongs to Ram Singh Chauhan. It was measured on the set of the Italian TV show 'Lo Show dei Record' in Rome, Italy, on March 4, 2010. 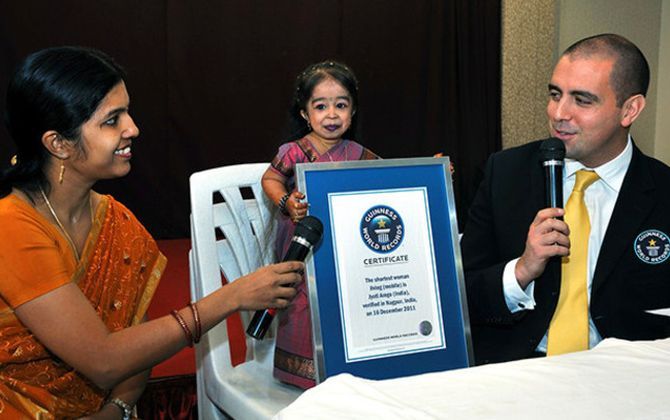 Jyoti Amge was measured at the Wockhardt Superspeciality Hospital in Nagpur India on her 18th birthday making her eligible to take over this record from Bridgette Jordan. Jyoti Amge had previously held the title for the shortest teenager (female) living.

Fastest time to husk a coconut with teeth 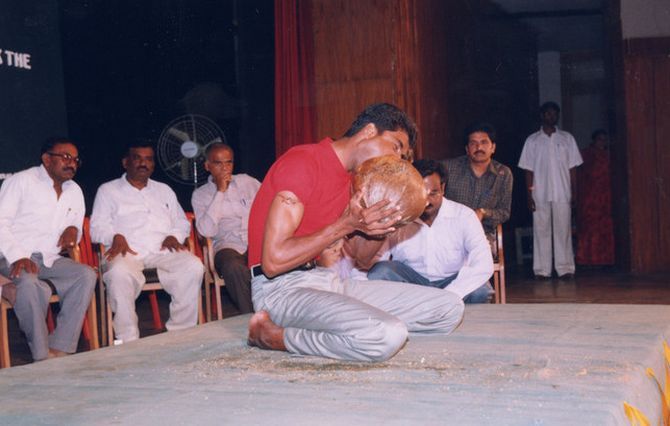 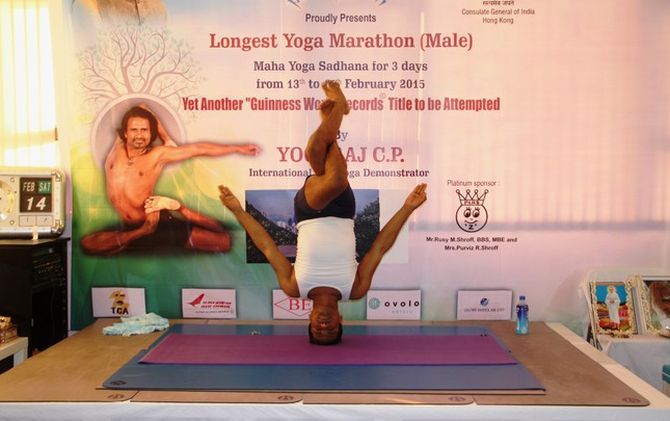 His attempt was broadcast live on YouTube, and over 1,200 yoga positions have been done. 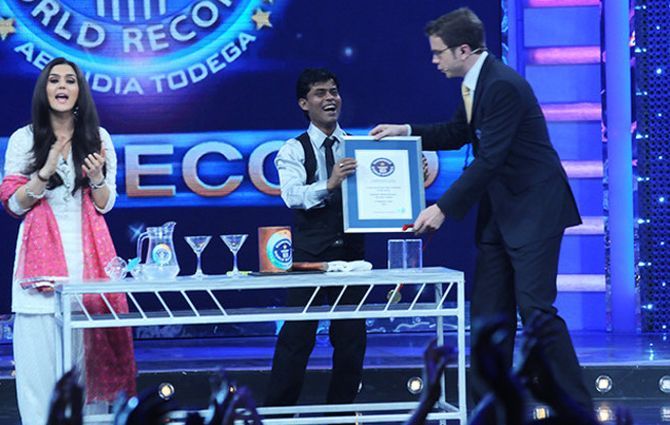 The fastest time to eat a drinking glass is 1 min 27 sec and was achieved by Patesh Talukdar (India) on the set of Guinness World Records - 'Ab India Todega' in Mumbai on March 10, 2011. Patesh also eats other things such as plastic or ceramics.

Longest marathon dance by an individual 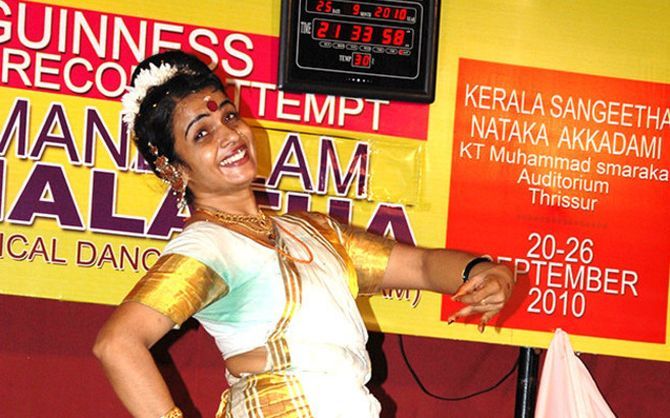 Hemalatha set the mark, erasing the record of Hyderabad-based Vettikotta Yadagiri, through her 123-hour performance staged in Thrissur from 20 to 26 September 2010.

The certificate, received by Hemalatha, said " the longest marathon by an individual was 123 hours and 15 minutes achieved by Kalamandalam Hemalatha." Students of the Suryakumbha solar oven cooking class first built solar ovens, then made a meal of vegetable masala noodles. The farthest distance limbo skating under cars is 48.21 metres (158 ft 2 in) and was achieved by Shreeya Rakesh Deshpande (India) at Kagal five star MIDC, Kolhapur India on 31 May 2012 Record attempt took place early in the morning where 5 year old Shreeya limbo skated under 27 cars in just 23 seconds.

Most number of Mahatma Gandhi's at one place Children dressed as Mahatma Gandhi took part in a peace march in Kolkata, on the eve of the 64th death anniversary of the Father of the Nation.As many as 485 children from the organisation Training Resource and Care for Kids, a charity for single mothers and children living without support at railway stations, took part in the peace march.

The march found its place in the Guinness Book of World Records for being the largest gathering of people dressed as Mahatma Gandhi. Sanskriti, a restaurant in Mumbai has made a 37-kilo "imarti" to enter the Guinness Book of World Records. Celebrity chef Sanjeev Kapoor, who was also present when the record was set, created the first perimeter of the imarti, 9 feet in diameter. The team also made the largest jalebi in the world weighing 18 kg with a diameter of nine feet, breaking the previous record of 8.2 feet. The imarti took three hours and 48 minutes to make, while the jalebi took three hours and 53 minutes, but it was consumed in less than 40 minutes!" 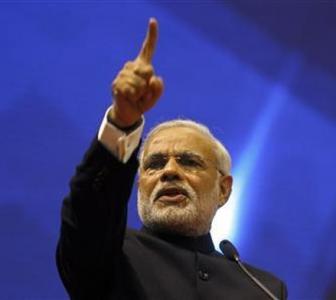 Time for Modi to lead from the front 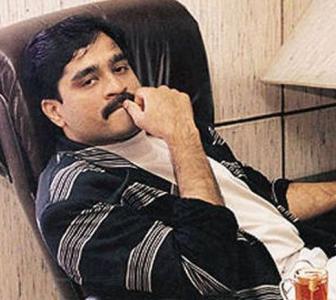 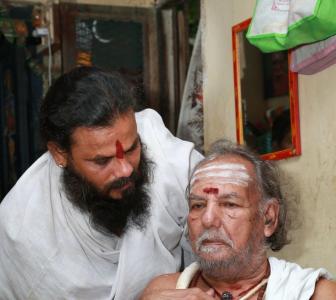