The flood situation in Assam continued to deteriorate with five more people losing their lives during the past 24 hours, while 4.5 lakh people have been affected in the deluge across six districts. 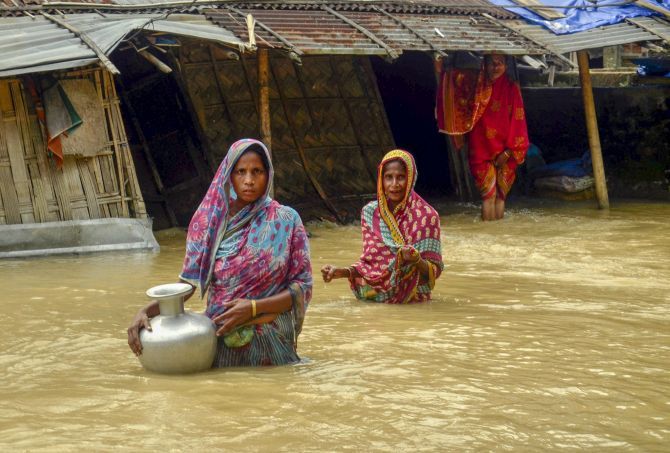 According to the Assam State Disaster Management Authority, five persons lost their lives in flood-related incidents in three districts during the last 24 hours.

With this, the death toll has climbed to 12 in the first wave of flood in Assam this year.

The ASDMA said over 4.48 lakh people have been affected in Hojai, Karbi Anglong West, Golaghat, Karimganj, Hailakandi and Cachar districts. 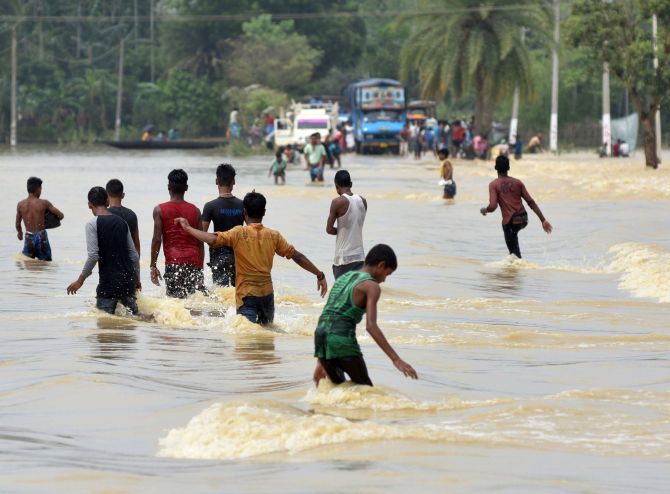 IMAGE: Villagers wade through a partially-submerged land in the flood-affected area in Assam. Photograph: Reba Borah/Rediff.com

Till Saturday, 4.25 lakh people were affected across seven districts in Assam.

According to the report issued today, Karimganj has been the worst-hit with nearly 2.15 lakh people affected followed by Hailakandi where over 1.93 lakh people have been suffering in the deluge.

Currently, 673 villages are under water and 1,512 hectares of crop areas have been damaged, the ASDMA said.

It said authorities are running 481 relief camps and distribution centres in five districts, where 1,73,245 people have taken shelter at present. 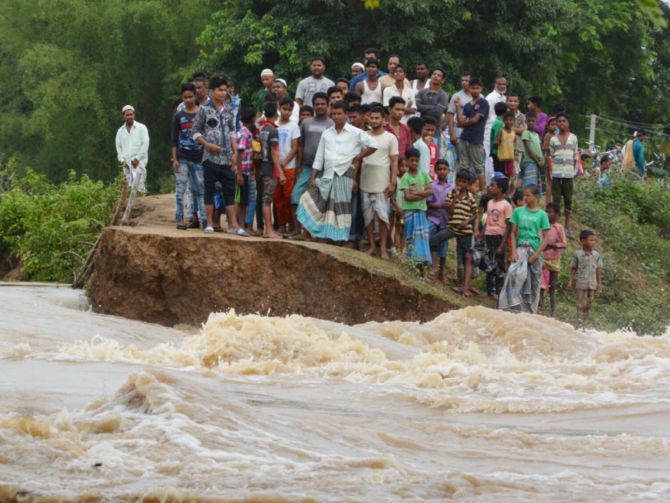 IMAGE: Villagers look on as a part of an embankment is being washed away by the flooding water. Photograph: Reba Borah/Rediff.com

The flood has damaged embankments, roads, bridges and other infrastructures in Hojai, Karimganj, Dima Hasao and Cachar districts.

As of now, Brahmaputra at Nimatighat in Jorhat, while Barak at AP Ghat in Cachar and Badarpurghat in Karimganj are flowing above the danger mark.

Other rivers like Dhansiri at Numaligarh in Golaghat, Jia Bharali at NT Road crossing in Sonitpur, Kopili at Kampur in Nagaon, Katakhal at Matizuri in Hailakandi and Kushiyara at Karimganj town are also flowing above the danger mark.