From Delhi to Kerala, rain continues to wreak havoc

Heavy rains in several parts of the country led to landslides, waterlogging and traffic disruptions in many states, including Gujarat, where the administration deployed the National Disaster Response Force and put the Air Force on alert after four villages were marooned. The national capital received heavy precipitation resulting in waterlogging on several roads and traffic jams at various intersections. The Safdarjung observatory, recording of which is considered official for the city, received 32 mm rainfall between 8.30 am and 5.30 pm. 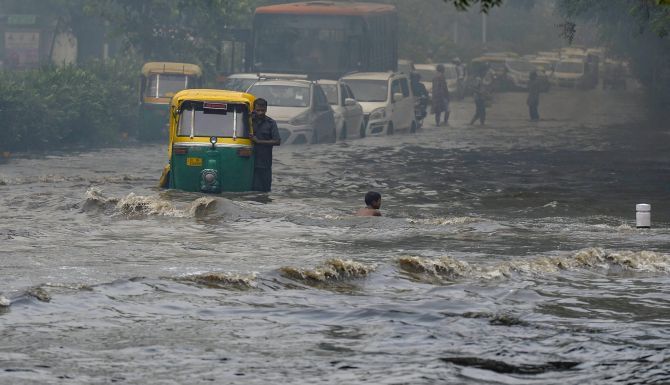 Several districts of Gujarat received heavy rainfall resulting in four villages getting marooned in the worst affected Gir Somnath district, even as the NDRF had to be deployed to rescue 70 passengers of a metre gauge train and the Air Force was put on alert, officials said.

Chief Minister Vijay Rupani held an emergency meeting to assess the preparedness. He said that six to seven districts were affected due to the rains and 15 teams of National Disaster Response Force, as well as the Air Force, had been put on alert. Hundreds of people in different districts were relocated to safer places, including 365 in Navsari, 50 in Amreli and 85 at Olpad in Surat, disaster management officials said. 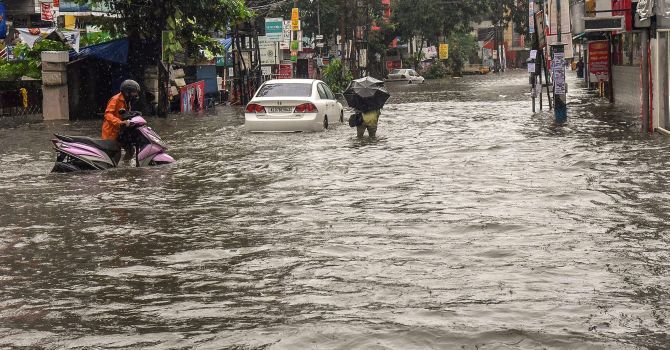 Several houses, shops and vehicles were swept away in a cloudburst in Tharali and Ghat areas of Chamoli district of Uttarakhand, while a woman died after falling into an overflowing canal in Pithoragarh district.

In Odisha, life was thrown out of gear in many parts of the state, following incessant rain that led to waterlogging in low-lying areas and snapped road links in several places. 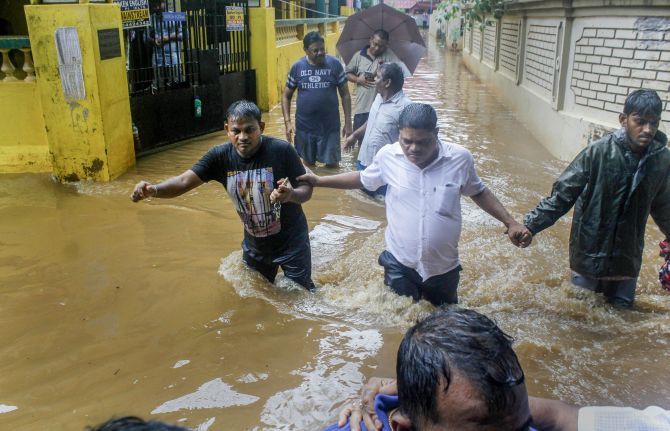 Special Relief Commissioner (SRC) B P Sethi said 12 districts of the state have received an average of 50 mm rainfall since Sunday. Normal life was hit in Bhubaneswar, Cuttack and the seaside pilgrim town of Puri due to continuous rain.

In Ganjam district, the situation remained grim as rainwater gushed into houses and farmlands in low-lying areas at Kabisuryanagar and Aska. Road links have been snapped in some areas, he said. In Rayagada district, rainwater has submerged many villages in Bissamcuttack and Paikadakuluguda areas, whilethe Bansadhara river level is rising. A landslide struck the Tarakote Marg, the new 7-km track to the Vaishno Devi shrine in Reasi district of Jammu and Kashmir, forcing its closure, a senior police officer said.

However, no one was injured in the incident, Senior Superintendent of Police, Reasi, Tahir Sajad Bhat said. He said the landslide occurred along the new track near Himkoti and efforts were on to clear the debris. 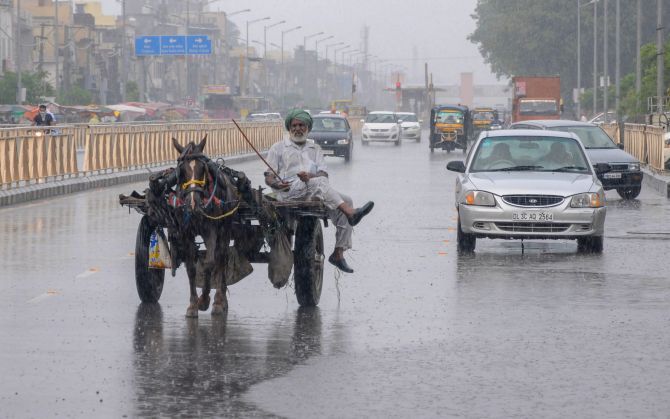 IMAGE: A man rides his horse-cart on a road as vehicles move at a slow pace during heavy rains in Amritsar on Monday. Photograph: PTI Photo

In the southern states of Kerala, rail and road traffic were hit in various parts due to waterlogging as heavy rains continued to pound the state with the South West Monsoon becoming active again.

In the second spell of rains due to the South West monsoon, 11 people have been killed since July 9, according to the state control room, which is monitoring rain-related incidents.
Several low-lying areas are inundated and roads are cut off, it said. 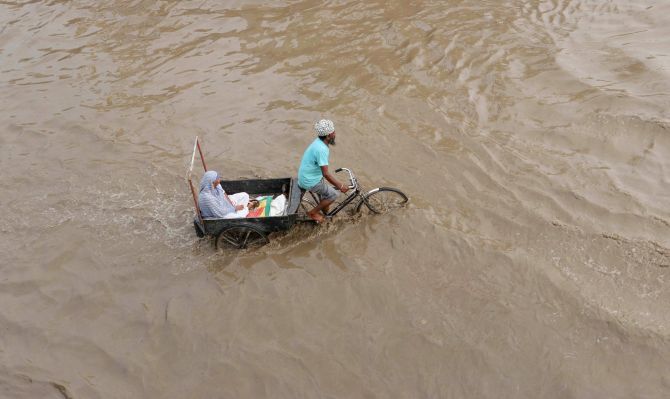 Due to waterlogging on rail tracks, signalling system has been affected and at least eight passenger trains have been cancelled and some others are running late in the Ernakulam-Thiruvananthapuram route. 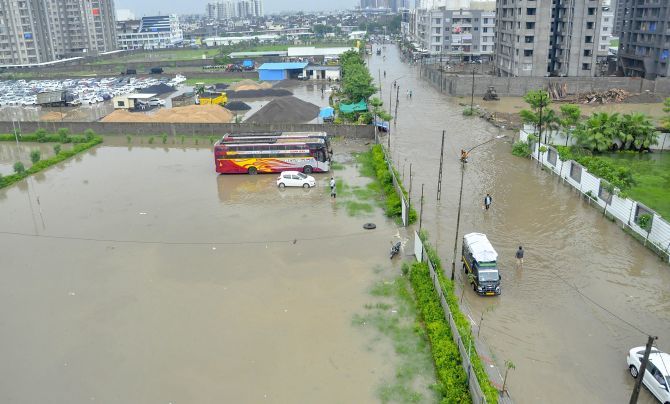 IMAGE: A view of a flooded locality after heavy rains in Surat. Photograph: PTI Photo 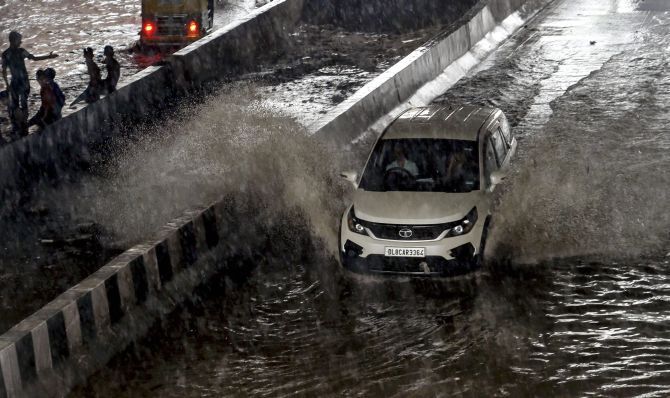 The Kerala University has postponed all its examinations scheduled for Tuesday to July 21.