The family of eight security personnel, who died in the 2001 Parliament attack, on Saturday took back the gallantry medals which they had returned in 2006 to protest against delay in the execution of Afzal Guru.

The kin of those who lost their lives in the attack received the medals from President Pranab Mukherjee. The families had decided to take back the medals after Afzal was hanged last month.

The families had returned the gallantry medals they had received in honour of the slain personnel to the Rashtrapati Bhavan on December 13, 2006.

Daughter of slain CRPF constable Kamlesh Kumari, Shweta Singh said, "I was here for my mother and I am grateful to the President that he rejected the mercy plea of Guru. It has honoured my mother's martyrdom."

Delhi Police constable late Vijender Singh's wife, Jayawati said, "I wanted nothing else from the government other than sentencing the perpetrators of the attack. It is a huge relief that martyrdom of my husband got its due."

M S Bitta, chairman of Anti-Terrorist Front, who accompanied the families to Rashtrapati Bhavan, said he was grateful to the President for giving back the medals.

"Rajiv Gandhi is a martyr and according to me one should risk the government, if required, to convict his assassins," Bitta said.

In a memorandum given by Bitta to the President, he has requested for release of the cash award, which was earlier announced for the security personnel, who had fought the terrorists at the time of the attack on Parliament.

Guru, convicted in the attack on Parliament on December 13, 2001 was hanged in Tihar Jail on February 9.

A special court had sentenced Guru to death in December 2002 for his role in aiding and abetting the attack which was upheld by the Supreme Court on August 4, 2005. 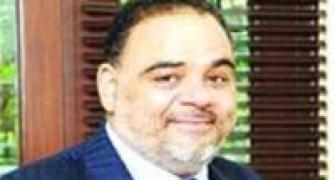 Ponty case: 7 accused sent to custody till Apr 11
President accepts resignation of DMK ministers
India has been waiting for this since a long time: BJP

After Italy, Google is taking Indian law for granted