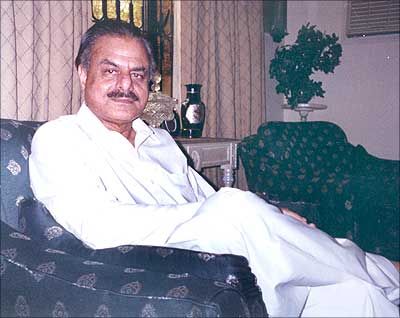 Pakistan's hardline Islamist general Hamid Gul, known for nurturing militants in Kashmir and Punjab and Afghanistan during his stint as chief of the powerful ISI, has died following a brain haemorrhage.

78-year-old Gul suffered brain haemorrhage last night and was rushed to the Combined Military Hospital in Murree near Islamabad where doctors pronounced him dead on arrival, his daughter Uzma Gul said on Sunday.

Gul, who was the ISI chief during 1987 and 1989 when the US-backed Afghan jihad against the then Soviet Union was at the last stages, continued working in the spy agency in the post-stages of the Afghan war.

Known for his hardline Islamist views, Gul is widely credited for expanding covert support to Kashmiri and Punjabi militant groups during late 80s and early 90s.

Gul was commissioned in the Pakistan Army in 1958 in the Armoured Corps (19 Lancers). He was a tank commander at the Chawinda front during the 1965 war with India.

Between 1972 and 1976, he directly served under Gen Zia-ul-Haq as a battalion commander.

He was promoted to Brigadier in 1978 and steadily rose to be the commander of the 1st Armoured Division, Multan in 1980.

He was then sent to the General Headquarters as the director general military intelligence under Gen Zia, who then nominated him to be the ISI chief in March 1987.

He was later replaced as the ISI commander by the then premier Benazir Bhutto in May 1989 and was transferred as the commander, II Corps in Multan.

He also conducted the Zarb-e-Momin military exercise in November-December 1989 against India.

When General Asif Nawaz was appointed army chief in August 1991, Gul was transferred as the DG Heavy Industries Taxila. He, however, refused to take the assignment and later retired in 1992 after differences with the army chief.

It is believed that Gul remained active supporter of jihadi group in Kashmir and Afghanistan.

He shared stage on multiple occasions with jehadi leaders like Mumbai attack mastermind Hafiz Saeed, spewing venom against India and the US.