Cabinet okays ordinance to award death for rape of children 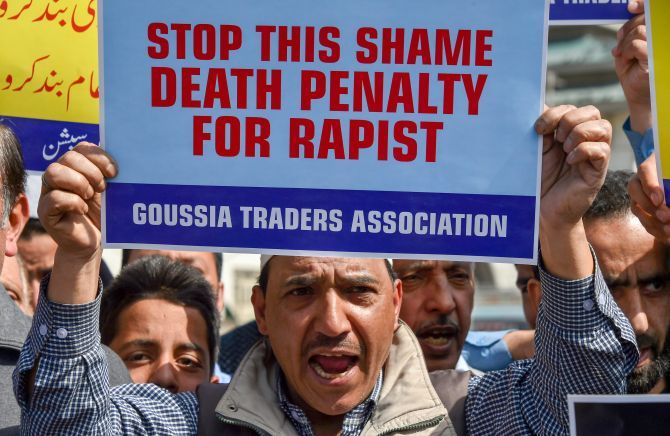 The Union cabinet on Saturday approved an ordinance to provide stringent punishment, including death penalty, for those convicted of rape of girls below 12 years, amid a nation-wide outrage over cases of sexual assault and murder of minors in Kathua and Surat and the rape of a girl in Unnao.

New fast-track courts will be set up to deal with such cases and special forensic kits for rape cases will be given to all police stations and hospitals in the long term, according to the Criminal Law Amendment Ordinance cleared by a cabinet meeting chaired by Prime Minister Narendra Modi.

It stipulates stringent punishment for perpetrators of rape, particularly of girls below 16 and 12 years. Death sentence has been provided for rapists of girls under 12 years, officials said quoting the ordinance.

In case of rape of a girl under 16 years, the minimum punishment has been increased from 10 years to 20 years, extendable to imprisonment for rest of life, which means jail term till the convict's 'natural life'.

The punishment for gang rape of a girl below 16 years will invariably be imprisonment for the rest of life of the convict, the officials said.

Stringent punishment for rape of a girl under 12 years has been provided with the minimum jail term being 20 years which may go up to life in prison or death sentence, they said.

The Indian Penal Code, the Evidence Act, the Code of Criminal Procedure and the Protection of Children from Sexual Offences (POCSO) Act will stand amended once the ordinance is promulgated after the approval of President Ram Nath Kovind, they said.

The measure also provides for speedy investigation and trial. The time limit for investigation of all cases of rape has been prescribed, which has to be mandatorily completed within two months.

The deadline for the completion of trial in all rape cases will be two months, the officials said. A six-month time limit for the disposal of appeals in rape cases has also been prescribed.

There will also be no provision for anticipatory bail for a person accused of rape or gang rape of a girl under 16 years, the officials said.

It has also been prescribed that a court has to give notice of 15 days to a public prosecutor and the representative of the victim before deciding bail applications in case of rape of a girl under 16 years of age.

Enhancing the powers of the judiciary to provide stringent punishment in rape cases, the cabinet approved a number of measures, such as strengthening the prosecution, besides setting up new fast-track courts in consultation with the states and high courts concerned.

New posts of public prosecutors will be created and special forensic kits for rape cases given to all police stations and hospitals in the long term, the officials said.

Dedicated manpower will be provided for investigation of rape cases in a time-bound manner, they said quoting the cabinet decision.

Special forensic labs exclusively for rape cases would also come up in each state, they said.

"These measures will form part of a new mission mode project to be launched within three months," the officials said.

The National Crime Records Bureau will maintain a national database and profile of sexual offenders. This data will be regularly shared with the states and the Union territories for tracking, monitoring and investigation, including verification of antecedents of sex offenders by the police.

The present scheme of 'One Stop Centres' for assistance to victim will also be extended to all districts in the country.

After the Nirbhaya case in December 2012, when the criminal laws were amended, the provision of death penalty in case a woman either died or was left in a 'vegetative state' after rape was introduced through an ordinance which later became the Criminal Law Amendment Act.

The government informed the Supreme Court yesterday that it is actively considering amending the law to introduce death penalty for those convicted of sexually abusing children up to 12 years.

"An ordinance today is the best way to deal with the issue. An amendment bill will have to wait (till July) when the Monsoon Session of Parliament commences," a law ministry official said.

In his first comments on the incidents of rape of a 17-year-old in Unnao in Uttar Pradesh and the sexual assault and murder of an eight-year-old girl Kathua in the Jammu region, Prime Minister Narendra Modi had last week said that no criminal will be spared and daughters will get justice.

"Such incidents shake our sensibilities. I want to assure the nation that no criminal will be spared. Justice will be done. Our daughters will get justice,” he had said at an event to inaugurate the B R Ambedkar memorial in New Delhi.

While in London to attend the just-concluded Commonwealth Summit, Modi had said that rape of a daughter was a matter of shame for the country.

A minor was allegedly held captive, tortured and raped before being killed, the Surat Police had said on April 15, three months after the sexual assault and murder of the minor in Kathua sent shock waves across the nation.

In the Unnao case, the CBI arrested BJP MLA Kuldeep Singh Sengar on April 13, hours after an Allahabad High Court order that he was influencing the "law and order machinery".