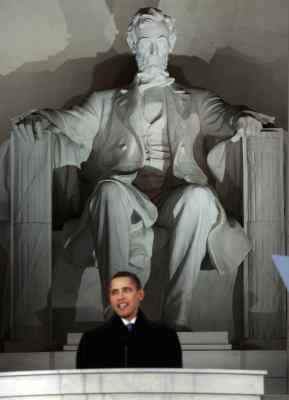 Barack Obama's inauguration festivities started off on Sunday morning with a star-studded concert and a motivational speech by the United States President-Elect at the Lincoln Memorial in Washington.

Thousands of supporters turned up to witness the 'We are One' inaugural celebration in spite of the bitter cold. Eminent musicians including U2, Stevie Wonder, Beyonce Knowles and Shakira performed at the event.

Addressing the twin issues of the wars in Afghanistan and Iraq and the economic crisis, Obama said, "In the course of our history, only a handful of generations have been asked to confront challenges as serious as the ones we face right now. Our nation is at war. Our economy is in crisis," he said.

Bu he added, "The true character of our nation is revealed not during times of comfort and ease, but by the right we do when the moment is hard.

"I ask you to help me reveal that character once more, and together, we can carry forward as one nation, and one people, the legacy of our forefathers that we celebrate today," said Obama, who will be sworn in as America's first black president on Tuesday morning.

Image: US President-elect Barack Obama speaks in front of the Lincoln Memorial during the We Are One: Inaugural Celebration in Washington on Sunday

Images: The end of the Bush era