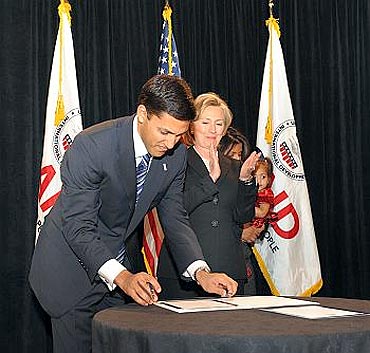 Dr Rajiv Shah, the highest-ranking Indian-American member of the Obama administration, has traveled with the President to the country his parents left in the late 1960s.
'The mission of USAID is to advance America's interests by strengthening our relationships abroad,' President Obama said last year while nominating Dr Rajiv Shah as Administrator for the United States Agency for International Development.

'Rajiv brings fresh ideas and the dedication and impressive background necessary to help guide USAID as it works to achieve this important goal,' Obama added.

Hailing the nomination, US Secretary of State Hillary Clinton -- under whose jurisdiction USAID falls -- said: 'Dr Raj Shah is a leader in the development community, an innovative and results-oriented manager, and someone who understands the importance of providing people around the world with the tools they need to lift themselves out of poverty and chart their own destinies.'

Even though the baby-faced, amazingly young, medical doctor and health economist's appointment raised some doubts if he could revive USAID, which had floundered without a leader for some years, the scepticism vanished in the wake of January's Haiti earthquake when Dr Shah led the American humanitarian effort to bring relief to hundreds of thousands of Haitians devastated by the calamity.

When Dr Shah was nominated to his job, Clinton pointed out that the Obama administration was affirming that 'development must be a core pillar of American foreign policy.'

In the year since he took the USAID job, Dr Shah -- who is only 37 years old -- has tirelessly worked to get US assistance across to human beings in dire need of succour around the world.

This past August he was in Pakistan overlooking American help to the millions of Pakistanis devastated by unprecedented floods.

The assignment brought him some share of controversy when he was accused of visiting a relief camp run by a front organisation of the Jamaat-ud-Dawa in Pakistan's Sindh province and handing over US aid.

The JuD is headed by Mohammad Saeed, the founder of the Lashkar-e-Tayiba and the mastermind of the horrific 26/11 terror attacks in Mumbai.

Speaking at the National Press Club in Washington, DC on his return, Dr Shah clarified, "I think it's important to note that the purpose of the trip was to oversee and manage and do everything we can to mount the most effective humanitarian response possible and that we carry out that moral mission because we are committed to saving lives that are in danger and alleviating extraordinary suffering when it occurs."

He noted that the camp in question was "in fact, a World Food Programme distribution... and it is the first structured distribution of 30-day rations being conducted in that area."

"I had a chance to meet with aid workers from WFP... I also had a chance to talk directly with women who were standing in line. And these were the people who pointed out to me that they didn't have shoes, you know, because they had lost all their possessions. They barely had clothing, their children were malnourished and ill. One woman had her child in a hospital somewhere and wasn't exactly sure what was happening to her child."

"It's such a tragedy of such massive proportions," he said, adding that he had hoped to spend "more time talking to the people in line, but within a few minutes of being there, our diplomatic security detail informed me that there were some suspicious individuals in the area and we needed to leave."

Dr Shah, whose parents migrated from Surat and settled down in Detroit where his father worked in the city's auto industry, earned his MD at the University of Pennsylvania Medical School and a Master of Science degree in health economics at the Wharton School of Business.

During his nomination, Clinton pointed out that Dr Shah had led many initiatives that are redefining best practice in the field of development, including the Global Alliance for Vaccines and Immunisation, the Global Fund for AIDS, TB, and Malaria, the Alliance for a Green Revolution for Africa, and the Bill and Melinda Gates Foundation.

tireless efforts to immunise children around the world have helped save countless lives,' Clinton said.

At USAID, Dr Shah has a budget in excess of $40 billion and oversees a staff of over 2,000 employees in Washington and worldwide.

US Congressional sources, who have worked with Dr Shah, described him earlier to Rediff.com's Aziz Haniffa as a person "of immense integrity," with an "innate sense and commitment to lifting people out of poverty," and "passionate in his dedication to development issues."

Obama and Clinton believe USAID will be crucial to the administration's 'smart power' foreign policy strategy, where diplomacy acquires equal importance with the projection of military power, particularly in places like Afghanistan and Pakistan where development must soon follow in areas previously held by the Taliban, if the populations in those areas are to be convinced that militancy and extremism should not be the preferred paths.

"Rajiv is the perfect choice," one US Congressional source had told Rediff.com during his nomination, "young, resourceful, committed, and with an unbelievable and impeccable track record, and if he is given the autonomy and independence and clear and defined portfolios and defined responsibilities, you can bet he will deliver, as he did during his nearly 10 years with the Gates Foundation."

Before his eight years at the Gates Foundation, Detroit-born Dr Shah had worked on healthcare policy for Al Gore's 2000 presidential campaign, and served as a member of Pennsylvania Governor Ed Rendell's transition committee on health.

On its site USAID noted that Dr Shah 'travels to India as part of President Obama's delegation to promote the US-India strategic partnership. Development cooperation forms an important part of the agenda.'

Interestingly, on its page on Dr Shah's India trip USAID also highlights its work with the Indian-American community.

Dr Shah is, of course, the highest-ranking Indian-American member of the Obama administration. His wife Shivam Mallick Shah is the Director of Special Initiatives, Office of Innovation and Improvement at the Department of Education.

The Shahs have been called the Indian-American community's first 'power couple' in the Obama administration.

Addressing 2,500 plus physicians at the convention of the Association of American Physicians of Indian Origin in Washington, DC earlier this year, Dr Shah remembered, "When I was in college, I had the chance to work with a group of Indian physicians who were serving in a development programme in a rural community in south India. And having just left the University of Michigan and the lovely city of Ann Arbor and going to a place called Behar Hills in south India somewhere between Bengaluru and Mysore to an environment where people literally lived off of less than a dollar a day, to get by they foraged in forest communities, and almost everybody was malnourished.

"It was a level of poverty and suffering that I simply had never been exposed to before."

"But what I saw there was that a group of physicians, who went in to provide TB therapy and treat leprosy and epilepsy and a range of other diseases, were also able to create a development programme that allowed women to produce products for export, whether it was baskets or honey or candles. And over time, slowly they built the trust of that community, they stayed committed to that community and they saw that community move itself out of poverty."

"I was only there for a brief period, about four to six months," Dr Shah remembered, "but it was enough to plant in me a sense that when we put our minds together and when we come together to resolve the extreme poverty that exists in this world, that we can be successful."

Based on earlier dispatches filed by Rediff.com's Aziz Haniffa

Photograph: Dr Rajiv Shah with his boss, US Secretary of State Hillary Clinton.

Don't miss our coverage of the Obama visit 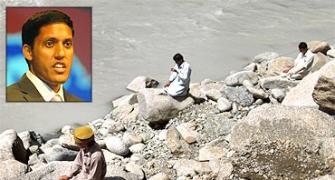 Dr Rajiv Shah thanks AAPI for supporting him