Muslims in Mumbai are up in arms against a United States military sniffer dog allegedly with name tag of 'Khan' that has landed in the city as part of President Barack Obama security arrangements.

On Tuesday, the German Shepherd arrived in the Mumbai airport from a Hercules C130 transport plane. The German Shepherd allegedly had a tag around its neck which read 'MWD Khan.' MWD stands for Military Working Dog. Khan is alleged to be the name of the dog.

Angry Muslims in the city and the state are threatening to protest this 'insult' to the community.

The issue became a rage when a tabloid had reported the incident and quoted veteran actor Raza Murad objecting to the dog being named 'Khan.'

Though noted lyricist Javed Akhtar had been quoted to ignore the issue and focus on welcoming the VIP guest.

Maharashtra Samajwadi Party leader MLA Abu Asim Azmi also threatened to undertake a protest. He said that the US deliberately wants to incite the Muslims through such acts and the party would stage a protest on the issue.

Prominent Muslim religious heads have expressed anger and dismay on the information of a US dog being named 'Khan.' Maulana Syed Athar Ali said that it is a known fact that Muslims detest pigs and dogs.

"To name a dog a Muslim name by US security agencies is to deliberately incite the Muslim community. We would be meeting soon and devise a strategy to protest and seek apology from the US," said Maulana Athar Ali. 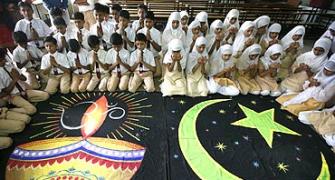