Miracles are an everyday event here

When Darshana Vakharia, a mother of two in Glendale, California, and wife of a diamond merchant, signed up with Asians for Miracle Marrow Matches or A3M, she hoped her bone marrow would match someone, especially in the Indian-American community. She was surprised when she heard that her marrow could save the life of a 14-year-old Latina girl in Houston.

Though the best match possibilities arise in an ethnic community, at times the donor's marrow can be matched to that of a person in another community.

"There are all kinds of miracle happening when you register as a donor, and keep your word," says Madhuri Mistry, a recruiter and a community relations manager for A3M.

A3M says it conducts over 500 donor recruitment drives each year for African-American, Chinese, Japanese, Latino, Korean, Filipino, South Asian, Vietnamese as well as multiracial communities. One of its donor drives includes a campaign for Maya Chamberlin, 5, whose father is a white American and mother, an Indian doctor (India Abroad, January 15).

One of the most valuable lessons Mistry, whose then husband was diagnosed with leukemia in 1992, has learned from her ordeal is that "you don't want to think of helping others only after experiencing a traumatic event in your life".

She began volunteering for the Los Angeles-based organisation over 13 years ago after she had launched an organisation of her own, the South Asian Task Force. She decided to merge her organisation with A3M, sensing it had a far bigger network and resources.

She was very new to America when her husband was diagnosed with cancer. "I did not know where to go for help," she says.

"We needed a bone marrow donor and I was told the best match could be found more easily in one's own ethnic community. The bone marrow donation organisations in California had no registered Indian donors at that time."

She sought the Red Cross's help too. "They encouraged me to start my own drive which I did during India's Independence celebrations in Los Angeles," she says. "I made flyers, I sought interviews in the local India media, I went to temples and gurdwaras."

Though her husband would survive with the medications he was receiving, it took them years to find a match.

"It was then I began to think of others who were in similar needs," continues Mistry, whose children Nikunj and Radha, both students, help her in her mission today.

"It made my volunteer work even more meaningful."

She said mainstream organisations contacted her when they heard of her personal endeavor. "They told me there were many people in our communities that needed donors," she says. "I distinctly remember contacting an Indian radiologist in the Los Angeles area. He began asking many questions about our drive, and slowly, I realised that his own child had leukemia and he too was looking for a donor."

Mistry, who has an advertising business background in India, was also looking for a job while trying to help her husband.

"When there was a vacancy for a full time job with A3M I decided to go for it," she says. "I believed fully in what I was doing."

She echoes many Indians involved in bone marrow donation drive when she says it is not easy to convince Indians to be donors, though she says the situation is becoming better.

Not long ago she told a California publication: 'When the South Asian task force goes to any temple, sits there for six hours and talks to every passerby, it comes back with 35 donors. But our Korean task force goes to churches every weekend and recruits 130 donors out of a congregation of 1,000.'

Much of the inspiration for the Korean success comes from the pulpit, interviews with the donors suggest. Several Indians say the Hindu clergy does not carry the same kind of clout Christian pastors carry.

"For Christians going to a church on Sunday is obligatory where we Hindus do not have anything like that in our religion," says an Indian mother who does not want to be named. She suggests that Indian churches across America could play a key role in the drive. And the temples could do their bit, too, she says. "Not just for bone marrow donations but also for social causes -- like anti-domestic violence -- that involve Indians." 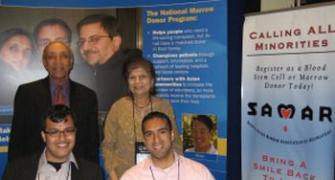 South Asians in US unite for bone marrow donation 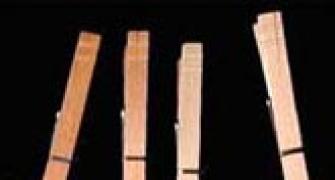 India aims to get black money abroad back: FM