Thousands of Metro commuters on Friday had a nightmarish experience when an evening chaos left them stranded at various stations in New Delhi as services on the Gurgaon route were disrupted for over three hours due to a problem in the Over-head Electrification.

The daily commuters, who were hoping to reach home on time, were in for a shock when they were told at the Metro stations that there were inordinate delays in services due to problem in the OHE.

Passengers alleged there were short-circuits on the OHE line, but Metro officials did not have any information on this.

The problem led to disruption of services between Central Secretariat and HUDA City Centre (Gurgaon) on the Line 2 (Jehangirpuri-HUDA City Centre), Metro officials said, adding that their engineers were working on the problem.

Hundreds of people could be seen standing outside at the Udyog Bhawan, Central Secretariat and Patel Chowk stations after the problem erupted at around 7.30 pm during the evening rush hours.

A DMRC spokesman said train services on the Central Secretariat-HUDA City Centre stretch were affected due to the problem in OHE.

"Services between Central Secretariat and HUDA City Centre came to a complete halt at around 7.30 pm after the OHE failed to supply power," he said, adding that the OHE problem occurred at three stations -- Udyog Bhawan, Green Park and Sikandurpur.

He said services between Central Secretariat and Jehangirpuri were not affected and remained normal. It was chaos at all stations on the line as thousands of people were stranded there for hours waiting for trains, but in vain.

Stations like CST, Udyog Bhawan were closed for some time and passengers were not allowed inside. Huge queues could be seen at some stations with passengers demanding refund of their tickets.

As situation went out of control, 15 DTC buses from Sarojini Nagar depot were moved to Central Secretariat to facilitate the travel of passengers towards Gurgaon.

Last month, passengers traveling in Delhi Metro's Dwarka-Noida had to face tough time just before the Commonwealth Games when it took them over two and a half hours to travel to their destinations because of similar technical faults. 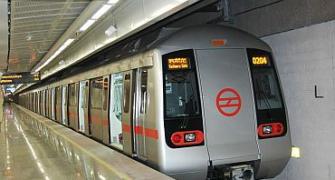 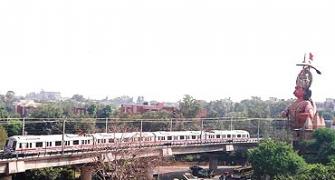