News
Business
Movies
Sports
Cricket
Get Ahead
Money Tips
Shopping
Sign in  |  Create a Rediffmail account
Rediff.com  » News » It's Modi vs the rest in Maharashtra polls 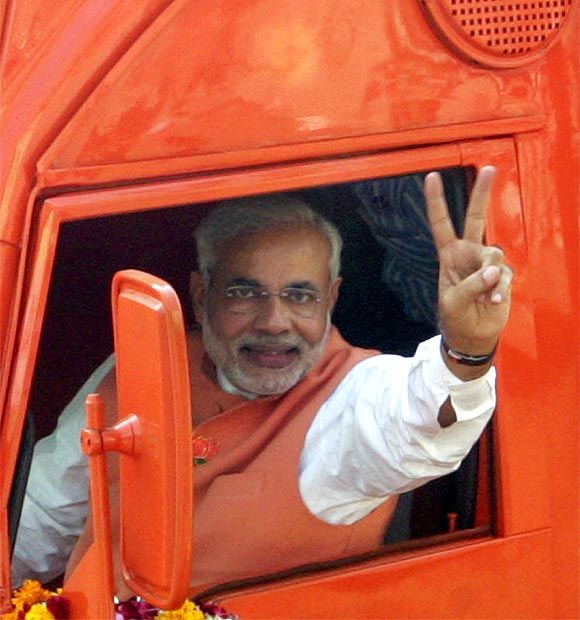 While the PM is trying to hardsell his developmental agenda, his rivals are targeting him in the run-up to the assembly election

Although the Maharashtra assembly election is a five-cornered contest, it has turned out to be Prime Minister Narendra Modi versus the rest. While his rivals are targetting Modi, he is trying to hardsell his development agenda.

Opinion polls are giving the Bharatiya Janata Party an upper hand. However, the Shiv Sena, Congress, Nationalist Congress Party and Maharashtra Navnirman Sena have dubbed it as “paid” ones and refused to go by their findings.

The Shiv Sena has not yet given up and declared an all-out war against the BJP, accusing it of back-stabbing.

On the other hand, the Congress, which is yet to recover from the Lok Sabha election debacle, has left the task of electioneering to its regional leaders.

For the NCP, it is a fight for survival. On top of it, the assembly poll is a matter of prestige for Sharad Pawar, who has retired from electoral politics. As far as MNS is concerned, it is an opportunity to revive and stay afloat, especially after the rout in the Lok Sabha poll.

Despite mounting criticism from Shiv Sena chief Uddhav Thackeray, the PM is avoiding a verbal duel. On the other hand, he is asking people to give a comfortable majority to the BJP. Modi is also attacking the Congress and NCP for Maharashtra’s “decline”.

Uddhav says Modi is planning to divide Maharashtra. According to him, Modi has ditched the Sena, though it stood by him during his worst phase in 2002 (Gujarat riots).

The Sena chief has been seeking votes to “send a strong message that his party will not surrender before the BJP or Modi” even if the election throws up a fractured mandate. He is trying to cash in on Bal Thackeray’s legacy, saying that there is only Bal Thackeray wave, no Modi wave in the assembly election.

For Modi, a BJP government in Maharashtra is crucial to pursue his plan to develop Mumbai as a global financial centre and capital for skill development. A weak Sena will help the BJP to further consolidate its presence across the state.

However, Sena has played “United Maharashtra” card very well, forcing the BJP to drop the Vidarbha statehood demand from its manifesto.

After 1999 election, this is the first time that the Congress and the NCP are fighting Assembly poll independently. Both have attacked Modi and the BJP for bringing disrepute to Maharashtra.

NCP chief Sharad Pawar has blamed the Congress for ending the alliance. The Congress leadership alleged that the NCP has an understanding with the BJP. However, the NCP has dismissed the claim. While the Congress is banking on “Mr Clean” image of former chief minister Prithviraj Chavan, the NCP hopes to win the election on Pawar’s performance.

For Raj Thackeray-led MNS, the present assembly poll is an acid test. MNS’ clout, which was prevalent in 2009 assembly poll, is not visible. Besides, the party doesn’t have good organisational setup.

Where do parties stand?

BJP: The party hopes to win a comfortable majority. Its biggest strength is the support of the Sangh Parivar, strong organisational base in Vidarbha, Marathwada and North Maharashtra. Of course, Modi is a star campaigner. Besides, the party has made inroads into Mumbai, Konkan and the rest of Maharashtra due to its alliance with the Sena since 1989. However, the death of OBC leader Gopinath Munde is a major setback. Leaders, including Nitin Gadkari, Prakash Javadekar, Piyush Goyal, state chief Devendra Fadnavis, Eknath Khadse, Vinod Tawde and Pankaja Munde are eyeing the post of chief minister. BJP faces flak for inducting tainted former ministers and leaders of the NCP.

Shiv Sena: The saffron party is contesting 286 assembly seats after the BJP parted ways with the Sena. Party chief Uddhav Thackeray has managed to keep the party united after Bal Thackeray’s death. It is an advantage for the party. A lot of leaders from the Congress, NCP, BJP and MNS had joined the Sena. Uddhav is the party’s campaigner along with his team including his son and Yuva Sena chief Aditya, senior leaders Divakar Ravate, Ramdas Kadam, Anil Desai and Neelam Gorhe. By taking on Modi, Uddhav managed to grab the attention. He continues to attack the Congress and the NCP on its corrupt rule.

Congress: The NCP’s decision to break the 15-year-old alliance and withdraw its support to the government was a major setback for the Congress. The imposition of President’s rule has further made the Congress furious. However, it is now clear that the Congress had taken decision to severe its links with the NCP, as it was not prepared to carry latter’s baggage. Congress leaders, including Chavan, argued that the NCP’s image might adversely impact the party’s poll prospects. The Congress believes that its alliance with the NCP would help the latter and not the otherwise. Despite crushing defeat in general election, the Congress' presence across the state is a big positive. However, lack of strong organisational base, factionalism and paucity of funds might go against the party. The Congress has to work hard to regain its traditional vote banks - minorities and Dalits.

NCP: It is a huge challenge for the NCP to change the perception of being the most corrupt party among the voters. It has been targeted by all parties. The NCP had prepared to contest 130 seats considering that its alliance will continue with the Congress.
However, the party failed to nominate good candidates. The party’s key leader Ajit Pawar, who has not hidden his ambition to become chief minister, is attacked in print, electronic and social media for his controversial remarks and alleged involvement in the multi-crore irrigation scam. However, the NCP is countering these allegations by saying that those who perform are always targetted.

MNS: Raj Thackeray hit the headlines for his agitation against north Indians and also against toll. He has failed to develop the second or third-rung leadership in the state. His party members have gone back to the Sena due to lack of clear policy. He is a crowd puller and declared that the MNS might support the Sena after the Assembly election. 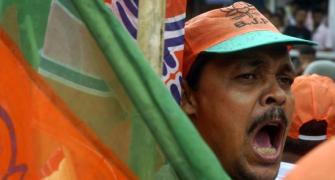 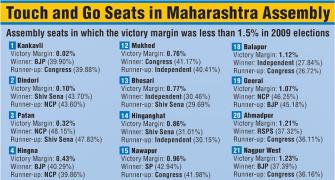 Assembly polls: Touch and go seats in Maharashtra and Haryana 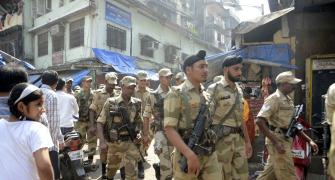 Over 2 lakh policemen deployed in Maharashtra for polls 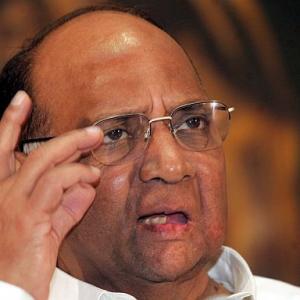 'BJP wants to come to power by hook or by crook' 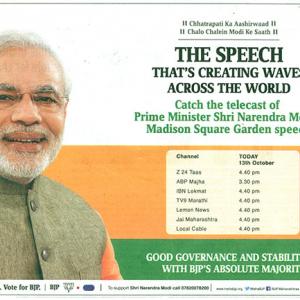