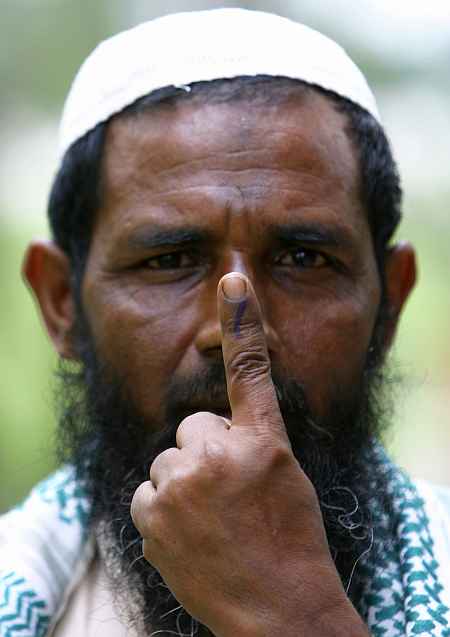 Some of it was squandered on a futile opposition, the youth rooted for Modi's promise. But a recent statement from minority affairs minister questioning the minority tag may damage BJP's prospects.

Rampur has a 49.1 per cent Muslim population -- the highest for any constituency in Uttar Pradesh. Going by convention and probability of winning, the Congress, Samajwadi Party, Bahujan Samaj Party, All-India Minority Front and Aam Aadmi Party fielded Muslim candidates. But the Bharatiya Janata Party ticket went to a Hindu.

Some 550 km from Rampur, the political scene was the opposite. The BJP re-nominated two-time MP and its lone-Muslim face, Shahnawaz Hussain, from Bhagalpur in Bihar, which has a 17.5 per cent Muslim population.

In Rampur, the BJP candidate won. In Bhagalpur, Hussain lost to Shailesh Kumar.

This indicates two things. In the first case, Muslims were confused and split their votes between the Congress, regional parties and new kid on the block, the AAP, not knowing which candidate had the best chance against the BJP in Uttar Pradesh. And voted against the BJP's only Muslim candidate in Bihar.

On the other hand, Hindu voters -- mostly upper castes and other backward castes -- voted en masse for the BJP. “The votes of secular parties were divided. That helped the BJP,” Sunni cleric Maulana Khalid Rashid Firangi Mahli told Business Standard.

Rafique Anwar, fellow of the Maulana Azad Institute of Asian Studies, seconds this view. “With the so-called Modi wave, Muslims wanted to be tactical voters. But there were several options -- AAP, BSP, SP, Congress and smaller Muslim parties. Voters were left guessing whom to vote for and this led to split in votes,” Anwar adds.

The assessment stands valid, as in Moradabad, next to Rampur and with a Muslim concentration of 45.5 per cent of the voters, the BJP's Hindu candidate defeated Muslim candidates from the Congress, SP, BSP and Peace Party.

In fact, none of the 55 Muslim candidates in the fray from 80 Lok Sabha constituencies in Uttar Pradesh won. This was the first time since Independence that UP failed to elect any Muslim, despite the community being nearly 18 per cent of the 200-million population of the state.

Many believe this is due to a spate of Hindu-Muslim riots, especially the Muzaffarnagar violence, which polarised both communities.

But despite the recent riots and rising atrocities against minorities, Muslims decided to stick to the ruling SP. Its candidates came second in most of the Muslim-dominated seats, either won by the Congress or BSP in the 2009 general elections.

Of Uttar Pradesh's 80 seats, Muslims make up more a third of the voting population in 15. Their population is 10-30 per cent in another 39. The BJP won 73 seats (two in alliance) and lost seven -- Amethi, Azamgarh, Badaun, Firozabad, Kannauj, Rae Bareli and Mainpuri. It was second in all seven. 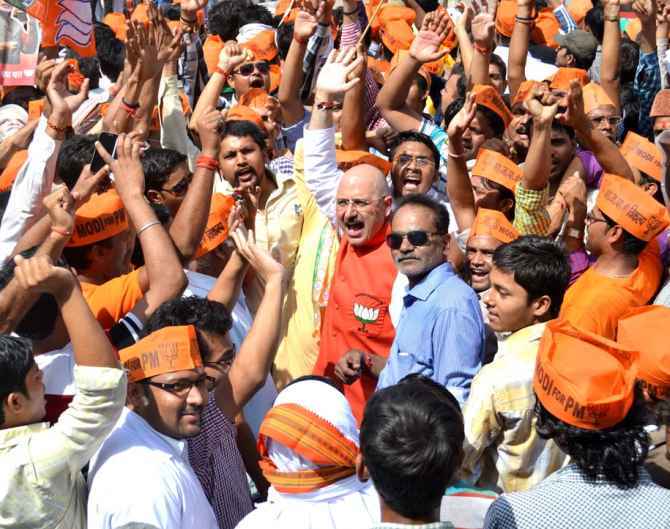 The other explanation behind the unprecedented surge of the BJP could be young and first-time Muslim voters supporting Narendra Modi. There were 80,000-90,000 first-time voters in each of the 543 Lok Sabha constituencies in this election.

The BJP won Delhi's Chandni Chowk and North-East Delhi parliamentary constituencies, where Muslims are sizeable. Without their support, it would have been difficult for BJP candidates to win.

In Assam, the BJP won seven seats, three in Muslim-dominated areas. Its vote share went up to 36.5 per cent from 16 per cent in 2009, ostensibly due to the Muslim vote swinging away from the All-India United Democratic Front (AIUDF).

"The promise of development held out by the BJP attracted first-time voters across religious lines. The Facebook and Twitter generation has voted for Modi," says Anis Ansari, retired bureaucrat and vice-chancellor of the Lucknow-based Khwaja Moinuddin Chishti Urdu, Arabi, Farsi University. 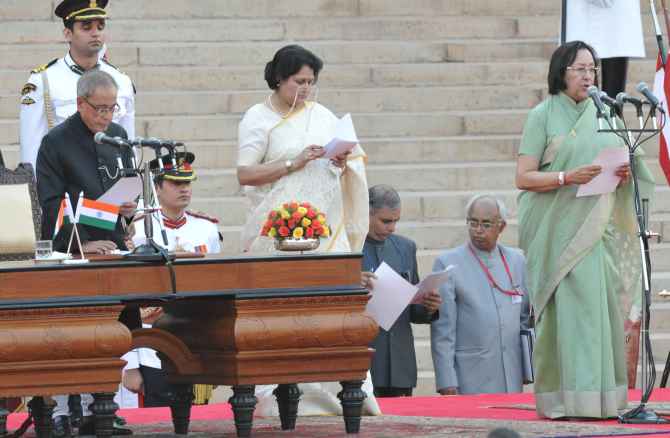 The counter-argument, however, could be had Muslims voted substantially for the BJP, none of its six candidates would have lost their respective elections. The real picture would only emerge when booth-wise data is made available for public scrutiny.

Though the BJP does not have a single Muslim MP in the 16th Lok Sabha, it has appointed Rajya Sabha member Najma Heptulla as minority affairs minister.

She has already kicked up some controversy, refusing a sub-quota for Muslims on the basis of religion as was being mulled by the previous Congress-led UPA government. She said Muslims are in a sizeable number and it is Parsis who need more attention.

This is the lowest Muslim representation since the 10th Lok Sabha (1991-1996). They won 23 seats despite 102 constituencies where the Muslims voting population is in the range of 20-99 per cent. The BJP won 47 of these.

The numbers suggest the chances of winning a seat for Muslim candidates are higher in Muslim-dominated constituencies in cluster states like Jammu and Kashmir, Assam, West Bengal, Uttar Pradesh, Bihar and Kerala.

Eight Muslim candidates won from West Bengal, four from Bihar, three from Kerala, three from Jammu and Kashmir, and two from Assam. Andhra Pradesh, Tamil Nadu and Lakshadweep have one Muslim parliamentarian each. 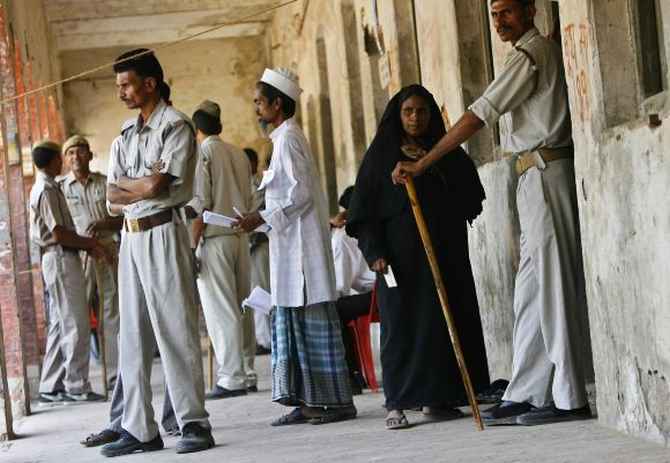 "By having a Muslim or a Hindu name, one does not necessarily represent a community. Being the people's representative, you have to work boldly and work in a secular way," says Idris Ali, Trinamool Congress leader and newly elected MP. "Here in West Bengal, our Chief Minister Mamata Banerjee has done more for the community than any Muslim leader."

There is no denying Muslim candidates won in states where the regional party stood strong against the BJP. The BJP won 47 of 102 Muslim-dominated constituencies.

After decimation of the BSP in Uttar Pradesh, and the dismal performance of the Congress, SP, RJD, JD(U) and the Left, Muslims are more confused.

They have options: Continue with the anti-BJP rhetoric or gradually accept Modi and his politics. "Muslims will observe which parties are working for their cause. Much will depend on implementation of promises," says Siddiqullah Chaudhary of the Jamiat-Ulama-i-Hind.

If the current political scenario lingers, there is a strong possibility that Muslims will strengthen community-centric parties. Such parties increased their tally in this election. One was in Assam, where the AIUDF increased its seats from one in 2009 to three in 2014.