Special Judge Arun Bharadwaj granted relief to Prasad after he was produced before the court through video conference from a Ranchi jail, where he is lodged in another case, as he was unable to come due to health reasons.

The court directed both the CBI and the ED to file their replies to Prasad's application seeking regular bail in both the cases.

The cases relate to alleged irregularities in granting operational contract of two IRCTC hotels to a private firm.

The court had earlier granted regular bail to Prasad's wife Rabri Devi and son Tejashwi Yadav in the CBI case, while they are on interim bail in the ED matter, which was extended till January 19, the next date of hearing.

In its charge sheet, the CBI had said there was enough evidence against Prasad, Rabri, Tejashwi and other accused, including Additional Member of Railway Board B K Agarwal, who was then the group general manager of the IRCTC.

Besides them, former Union minister Prem Chand Gupta, his wife Sarla Gupta, then managing director of IRCTC P K Goyal and then IRCTC director Rakesh Saxena are also named as accused in the charge sheet.

Among others named in the charge sheet are -- then group general managers of IRCTC V K Asthana and R K Goyal and Vijay Kochhar, Vinay Kochhar, both directors of Sujata Hotels and owners of Chanakya Hotel.

The CBI had registered a case in July last year and carried out searches at 12 locations in Patna, Ranchi, Bhubaneswar and Gurgaon in connection with the case.

The charges in the case include criminal conspiracy, cheating and corruption, the CBI had said.

According to the charge sheet, between 2004 and 2014, a conspiracy was hatched in pursuance of which BNR hotels of the Indian Railways, located at Puri and Ranchi, were first transferred to the IRCTC and later, for its operations, maintenance and upkeep, it was given on lease to Sujata Hotel Private Limited, which is based in Patna, Bihar.

It is alleged that the tender process was rigged and manipulated and the conditions were tweaked to help the private party - Sujata Hotels.

It also claimed that on February 25, 2005 Vinay Kochhar sold commercial property in the form of three acres of land in Patna through 10 sale deeds for Rs 1.47 crore to Delight Marketing, in which Sarla Gupta was a director as a front benami holder on behalf of Prasad.

Between 2010 and 2014, this land was further transferred, the CBI alleged.

In 2001, it was decided to handover the management of catering services of the Indian Railways, including of its hotels, to the IRCTC. Two such hotels -- BNR Hotels in Ranchi and Puri -- were also identified and a memorandum of understanding (MoU) was signed between the railways and the IRCTC on March 19, 2004.

According to an FIR flied by the CBI, Prasad, the then railway minister, entered into criminal conspiracy with the owner of Sujata hotels, Sarla Gupta, the wife of his close associate Prem Chand Gupta, an Rashtriya Janata Dal MP in the Rajya Sabha, and IRCTC officials for "undue pecuniary advantage to himself and others".

The probe agency also alleged that BNR hotels were transferred to Sujata Hotels through a "rigged and manipulated" tender process managed by P K Goyal, the then managing director of the IRCTC.

The CBI enquiry shows that the railways sought bids for developing, operating and maintaining Rail Ratna Hotels on September 16, 2006.

The probe agency has alleged that Prasad was aware about the whole process and was keeping a track of the tender proceedings.

It surfaced that while over 15 bid documents were received for both the hotels, the IRCTC had no records of bidders other than Sujata Hotels.

It was also alleged that with an intention to render undue pecuniary gains to Sujata Hotels, the bid of another hotel was deliberately and unreasonably given low marks under technical evaluation.

"As a result, Sujata Hotels remained the only bidder in financial evaluation and was qualified," the CBI had alleged, adding that after the tender was awarded to Sujata Hotels, the ownership of Delight Marketing also changed hands from Sarla Gupta to Rabri and Tejashwi between 2010 and 2014.

By this time, Prasad had demitted the office of railway minister.

He became Bihar's chief minister in 1990, but had to resign in 1997 following corruption charges in the multi-crore rupees fodder scam. From 1997 to 2005 his wife Rabri ruled as the chief minister of the state and was replaced by Janata Dal-United president Nitish Kumar.

Prasad also served as Union Railways minister from 2004 to 2009.

The RJD again came back to power after forging an alliance with its bitter rival Janata Dal (United), led by Kumar in 2015, and Tejashwi Yadav became the deputy chief minister.

However, Kumar parted ways from the RJD in July last year marking the end of Tejashwi's tenure.

Based on the CBI case, the ED also lodged a case of money laundering against Prasad, Rabri, Tejashwi and others. 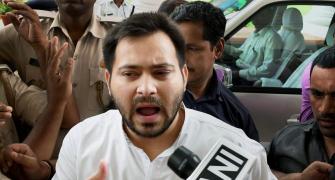 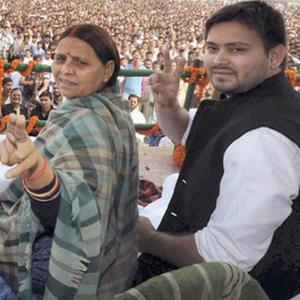