Two top Haryana officers on Thursday sparred over cancellation of Robert Vadra-DLF land deal, with the Town and Country Planning head T C Gupta claiming there were "factual inaccuracies" in the orders by Ashok Khemka who stood by his decision and said the aggrieved parties were free to move court.

Senior IAS officer Khemka, who cancelled the sale deed of 3.5 acre of land to realty major DLF following a deal with Vadra, said any aggrieved party -- government or parties to the deal -- could approach the high court if they felt aggrieved with his recent order.

Khemka met Haryana Chief Secretary P K Chaudhary in Chandigarh on Thursday for about 50 minutes -- his first meeting after the recent controversy arising out of his order and his subsequent transfer from the post of director general of consolidation.

Earlier, Gupta had taken on Khemka, a 1991 batch IAS officer, saying his order cancelling the mutation of the land deal contained "factual inaccuracies" and had been passed in "total disregard of administrative propriety".

Gupta said the original copy of Khemka's order has still not been received by his Department, "even though the same has found its way to all newspapers/electronic media".

"In these orders, certain comments have unnecessarily been made against the working of this department which are not only unfounded but totally uncalled for," he said.

Talking to reporters after his meeting with the chief secretary, Khemka said, "The talk with the CS is privileged communication. It cannot be disclosed to the media."

"I have left the post of DG Consolidation. If any party or government has any grievance following my order, the remedy for them lies is to approach the (Punjab and Haryana) high court," he said.

"I am satisfied with the meeting with the chief secretary," Khemka said.

Asked about the letter written by Gupta slamming his actions, he said, "I am not aware about the letter. It was a diversionary tactic to divert from the issues raised. It is like a red herring. You should focus on the issue and not on the myth being created".

On Gupta's demand for taking action against him, Khemka said it was for the government to act. "Everything is on paper and there is nothing to be disputed. But now since I am not on the post it will not be appropriate for me to comment."\

On the order of cancellation of mutation passed by him, Khemka said, "As far as I am concerned it is a final order. However, if the government thinks there is any infirmity in my order they can approach the high court with a writ petition under Article 226 of the Constitution."

Gupta had alleged in his letter that "several insinuating/ uncharitable remarks have been made in (Khemka's) orders".

In his order, Khemka had said "it is not known what made the Town & Country Planning Department to renew LOI/License on 18.01.2011 in favour of the vendor, when 86.2 per cent of the total sale consideration was paid to him by 7.10.2009 i.e. 15 months before the date of renewal of the LOI/license."

However, coming down heavily on Khemka, Gupta had said in the letter that "these observations show lack of knowledge on the part of the officer not only about Haryana Development & Regulation of Urban Areas Act, 1975 and Rules, 1976 framed thereunder under which these licenses are granted/renewed but also about the provisions of Transfer of Property Act, which the officer, in the capacity of inspector general of registration, was supposed to know.

"It is a well known legal position that the Agreement to Sell, with or without any consideration, does not 'convey' any title in favour of the vendee. This Agreement to Sell is not supposed to be submitted to the Department under any Act/Rules and was not in the knowledge of the Department," Gupta had stated.

"However, even if the same was communicated by the Vendor/Vendee to the Department, the renewal of licence could have been done only in the name of entity which was the owner of the land on the date of renewal of licence which admittedly was Skylight Hospitality Pvt. Ltd. because the sale deed was executed only on 18.09.2012," Gupta claimed.

"It is reiterated that the renewal of licence has been done perfectly in accordance with rules. Therefore, the observations in this regard are not only uncalled for but either product of a biased mind or an ignorant officer who does not know law or does not want to know the applicable laws for reasons best known to him..," Gupta charged.

The town and planning head also requested the chief secretary to refer his letter to the three-member inquiry committee headed by the additional chief secretary, revenue and disaster management and consolidation, constituted by the state government on Tuesday to go into the allegations levelled by Khemka.

Khemka, who joined his new posting as managing director, Haryana Seeds Development Corporation on Wednesday, said the chief secretary told him that transfer is the prerogative of the state government and there was no malafide intention in this. "I fully accept what he (CS) said," Khemka said.

Asked if he was not aware earlier that the transfer is the prerogative of the state government he said, "Earlier I was not satisfied which is why I wrote the letter". 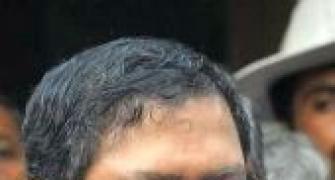 Govt can do ANYTHING: IAS who probed Vadra deal