It's more than just a wedding invite for PM, Sonia 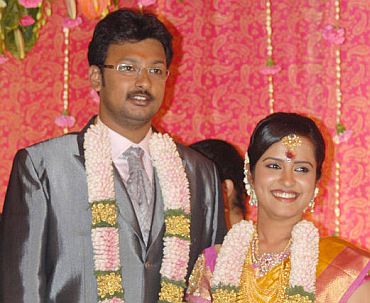 The wedding of Alagiri's son Dayanidhi is slated for November 18.

It is expected that the two brothers may also discuss a possible poll pact seeking extra seats with the Congress in Tamil Nadu in the ensuing April 2011 polls.

Political analysts in Tamil Nadu do not rule out the possibility of Alagiri quitting as Union Minister after the wedding to jump into massive electioneering for the success of the Dravida Munnetra Kazhagam in southern districts of Tamil Nadu.

The challenge before Alagiri is to get at least 80 DMK MLAs elected -- a tough task, which should give Alagiri a handle to contest against his younger brother MK Stalin for the post of Chief Minister.

It may be recalled that Alagiri had accepted the challenge and sought an open contest for the post of chief ministership of Tamil Nadu.

In 8 years, Tamil Nadu rivers will be inter-linked