News
Business
Movies
Sports
Cricket
Get Ahead
Money Tips
Shopping
Sign in  |  Create a Rediffmail account
Rediff.com  » News » It's day 45 and Kashmir is still under lockdown

It's day 45 and Kashmir is still under lockdown Srinagar remained under curfew on Monday after a teenager was killed by a teargas shell on Sunday, even as normal life in the Valley was paralysed for the 45th day due to restrictions and strike in the wake of violence following killing of Hizbul Mujahideen commander Burhan Wani.

Curfew continues to be in force in entire Srinagar district as well as in Anantnag town.

Curfew has also been clamped in Khansahib town of Budgam district of central Kashmir as a precautionary measure, a police official said.

He said curfew was lifted from Pampore town in view of the improving situation.

However, the official said, restrictions on the assembly of four or more people under Section 144 Crpc have been imposed in the town and elsewhere in the Valley where there is no curfew.

This is to maintain law and order, he said.

A youth, Irfan Wani, was killed in downtown area of the city on Sunday after he was hit by a tear gar shell.

The official said restrictions around Lal Chowk city centre in the summer capital, which were imposed on August 14, were also eased out on Monday.

People with curfew passes are being allowed to move around Lal Chowk, he said.

The separatist camp, which is spearheading the agitation in the Valley over the civilian killings during the protests against Wani’s killing, has asked people to march towards Tehsil headquarters on Monday.

As many as 65 persons, including two cops, have been killed and several thousand others injured in the clashes that began on July 9.

Shops, private offices, educational institutions and petrol pumps remained closed while public transport continued to be off roads. The attendance in government offices and banks was also affected.

Image: Security personnel stop a biker on the road amidst the curfew imposed in the valley. Photograph: Umar Ganie/Rediff.com 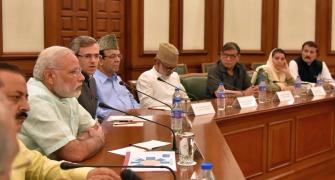