News
Business
Movies
Sports
Cricket
Get Ahead
Money Tips
Shopping
Sign in  |  Create a Rediffmail account
Rediff.com  » News » 'It's a clear declaration of emergency': Rights groups on raids on activists

'It's a clear declaration of emergency': Rights groups on raids on activists

Outraged over multi-city raids by Maharashtra police on homes of several prominent activists and subsequent arrests, a number of noted lawyers, academics, authors, human rights defenders and opposition leaders on Tuesday termed the action as a ‘virtual declaration of emergency’ in run-up to elections. 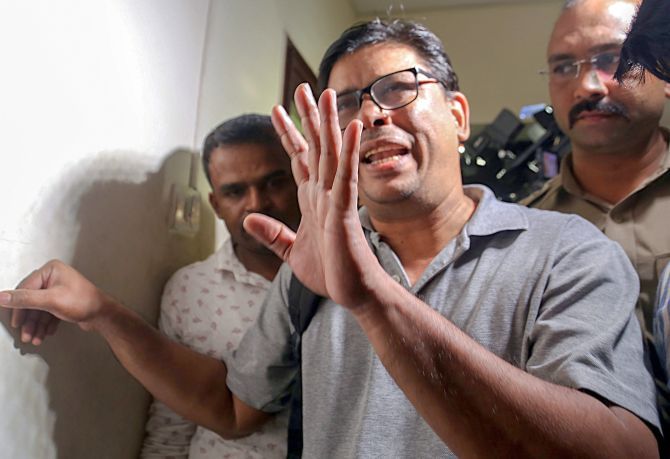 IMAGE: Arun Ferreira, a human rights activist and lawyer, after he was arrested by the Pune police in connection with Bhima Koregaon violence case. Photograph: PTI Photo

Taking a dig, Congress chief Rahul Gandhi said there was place for only one NGO in “the new India” and it was the Rashtriya Swayamsevak Sangh.

“Shut down all other NGOs. Jail all activists and shoot those that complain,” he tweeted.

Amnesty International and several other groups including People’s Union for Civil Liberties called the action a concerted attempt to crush human rights interventions and to silence voices of dissent.

The raids were carried out as part of a probe into the violence between Dalit and the upper caste groups at Koregaon-Bhima village near Pune after an event called Elgar Parishad on December 31 last year.

A police official said all the five, who were arrested later, are suspected to have Maoist links and had allegedly funded the Elgar Parishad conclave.

Historian Ramachandra Guha called the action “absolutely chilling” and demanded the Supreme Court’s intervention to stop this “persecution and harassment” of independent voices.

“Sudha Bharadwaj is as far from violence and illegality as Amit Shah is close to those things,” tweeted Guha, adding if Mahatma Gandhi was alive, he would have defended Bharadwaj.

“As a biographer of Gandhi, I have no doubt that if the Mahatma was alive today, he would don his lawyer’s robes and defend Sudha Bharadwaj in court; that is assuming the Modi Sarkar hadn’t yet detained and arrested him too,” he tweeted.

Author Arundhati Roy said, “In the run up to elections, it is an attempted coup against the Indian Constitution and all the freedoms that we cherish”.

Several activists said it was like an undeclared emergency when the rights defenders and dissenters are being raided, arrested, jailed and even killed.
According to unconfirmed reports, raids were also carried out at residences of several other activists including Susan Abraham, Kranthi Tekula, Father Stan Swamy in Ranchi and Anand Teltumbde in Goa.

Condemning the police action, the Communist Party of India-Marxist accused the BJP-led government of “attacking the democratic rights of people” to shield the real culprits of Koregaon-Bhima violence.

Congress spokesperson Jaipal Reddy condemned the raids and arrests and said, “They are selfless NGOs, activists who are obliged to fight the enveloping darkness of dictatorial tendencies.”

Roy said, “The simultaneous state-wide arrests are a dangerous sign of a government that fears it is losing its mandate and is falling into panic.”

“That lawyers, poets, writers, Dalit rights activists and intellectuals are being arrested on ludicrous charges... while those who make up lynch mobs and threaten and murder people in broad daylight roam free, tells us very clearly where India is headed,” she said.

Roy alleged that “murderers are being honoured and protected” and anybody who speaks up for justice or against Hindu majoritarianism is being made into a criminal.

She said it was as close to declaration of an emergency as it can get. Another activist Kavita Krishnan also described the action as “undeclared emergency”.

In a statement, the PUCL said, “Such systematic and pre-meditated crackdown on human rights activists is unprecedented and unheard of in a democracy.”

Noted lawyer Prashant Bhushan said, “Fascist fangs are now openly bared. It is a clear declaration of emergency. They are going after anyone who has spoken against the government on rights issues. They are against any dissent.”

CPI-M leader Prakash Karat called it “a brazen attack on democratic rights” and demanded immediate release of the activists.

In a video message, CPI national secretary K Narayana said, “We strongly condemn the arrest of well-known Left intellectual Vara Vara Rao.... Ever since the Modi government has come into power, they are trying to kill intellectuals.”

“They killed Govind Pansare, Gauri Lankesh and Kalburgi and they have also imprisoned GN Saibaba. They have arrested Vara Vara Rao only with the intention of killing him. Is the PM really that weak, to be killed so easily?” he said.

JNU student leader Shehla Rashid alleged it was an attempt to “instil fear among those who are vocal about issues” and “to manufacture a narrative and a sense of false enemy to misguided people ahead of the 2019 elections”.
A number of prominent youth leaders, activists and authors issued a joint statement, alleging it was an attempt by the BJP to engage in “scaremongering” and “polarise” the 2019 elections in its favour.

Several civil society and rights groups will also hold a press conference on Wednesday in Mumbai to condemn the police action. 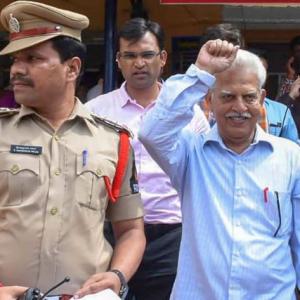