News
Business
Movies
Sports
Cricket
Get Ahead
Money Tips
Shopping
Sign in  |  Create a Rediffmail account
Rediff.com  » News » 'Iran issue may turn out to be a train wreck for Indo-US ties'

Richard Fontaine, director of the Task Force convened by the Centre for New American Security, fears that India's abstentions of key votes at the United Nations Security Council and a divide on the issue of Iran when it does come up may dissipate Washington's enthusiasm to push for India's bid for a permanent seat.

Last year, the task force had published a study titled Natural Allies: A Blueprint for the Future of US-India Relations on the eve of President Barack Obama's trip to India in November; it was also catalytic in urging Obama to endorse India's candidacy for a permanent seat in the UNSC.

Richard Fontaine, a Senior Fellow at CNAS, who authored the study that was co-chaired by former deputy secretary of state Richard Armitage and erstwhile Under Secretary of State Nicholas Burns, said, "In many ways, the two-year tenure (of India as a member of the 15-member UNSC), is the big opportunity for the United States and India to demonstrate that they can work together on the Security Council because obviously there are lingering doubts about what it would actually mean for India to have a permanent membership."

He said, "The India and US voting coincidence in the General Assembly, 30 percent or something, which is, suboptimal, at least from out point of view and we've been on the other side of issues that have come before the Security Council when India hasn't been on it, like Burma and certain sanctions and so forth," is an unviable track record.

"So, this is the big opportunity to show what it would actually be like if we were both on the Security Council together," he said.

Fontaine said that he did not believe India's no vote on the Libya No-Fly Zone was "particularly consequential because the mandate came through and an abstention is an abstention."

But he said that it would "be interesting to see if India has a high rate of abstentions in its two years because I do think that there is still some working out on the Indian side of precisely the role it wants to play."

"India has said for a long time that it sees itself as a global power with global interests and global ambitions. US has said the same thing about India," he said.

But Fontaine pointed out, "On a number of international issues, India has not taken a stand one way or the other or sort of said that it wants to remain nonaligned. That does not seem to be commensurate with being on the Security Council and having to take a stand on many issues."

He flagged the possible issue of Iran which could come up between now and the end of India's tenure on the Security Council.

Fontaine predicted, "That is the issue that has the potential to truly be kind of a train wreck in terms of the relationship because some Indian officials describe themselves as having a strategic relationship with Iran."

"They don't want to put pressure on Iran for fear of stirring up Shia sentiment at home and they have, obviously, energy ties with Iran," he added.

Fontaine noted, "This is at the very top of the American national security foreign policy agenda. So, if this does come before the Security Council and we're on one side and India is on the other, that's going to be a very difficult thing to bridge."

When queried whether New Delhi could use its soft diplomacy to help in situations where the US is having difficulties in making inroads with Iran -- since Washington has always maintained its differences are with the Iranian government and not its people -- Fontaine acknowledged that India could certainly play such a role.

"I guess, while there's certainly an avenue for the United States to learn things about what Iran is doing and the way it makes decisions in a way we couldn't do it in the absence of consultations with India, simply because of India's relationship with Iran and Iranian leaders, and so there are those kinds of opportunities to use India in a way that is different than we would normally expect, which is just one more country that's trying to put on the pressure," he said.

But Fontaine argued that that the political reality of this issue in the US Congress should not be underestimated. "I mean, if you're sitting in Congress and your constituents say, ok, well the United States changes export controls -- because that was a big request of the Indians -- and it recognised India's aspirations for the UN Security Council and the President (in his speech to the Indian parliament endorses India's candidacy) -- you add up all of these and the civilian nuclear agreement, but on one of the biggest issues of importance to the US Congress, which is sanctions on Iran and trying to prevent an Iranian nuclear programme, India is on the other side of that issue, that is a very difficult thing to bridge."

Thus, he said while there is some value to India playing the role of a mitigator on the Iran issue, "it doesn't stop there." 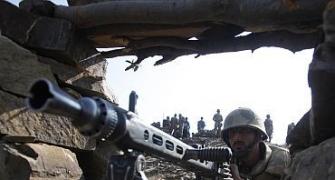 Despite the US, India leans towards Iran