India has not only exceeded the Paris commitments but has now also set an ambitious agenda for the next 50 years, Prime Minister Narendra Modi said on Tuesday after he took part in two days of intense discussions with world leaders at the climate summit on the future of the planet. 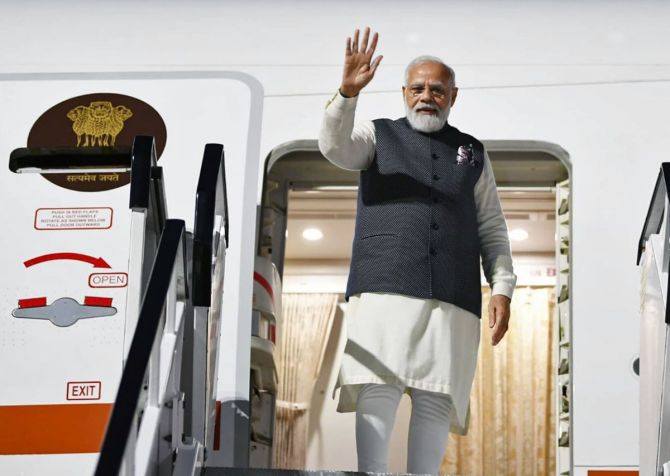 IMAGE: Prime Minister Narendra Modi leaves for Delhi, at the conclusion of the High Level Segment of COP26, in Glasgow on Tuesday. Photograph: ANI Photo

Prime Minister Modi said this in a tweet while leaving for home after concluding his five-day official visit to Rome and Glasgow where he attended the G-20 Summit and the COP26 UN Climate Change Conference respectively.

"Departing from Glasgow after two days of intense discussions about the future of our planet. India has not only exceeded the Paris commitments but has now also set an ambitious agenda for the next 50 years," Modi tweeted.

"It was wonderful to see many old friends in person after a long time, and meet some new ones. I am thankful to our host PM @BorisJohnson and also to the Scottish people for their warm hospitality in the beautiful Glasgow," he said in another tweet.

A large contingent of Indian community members dressed in colourful Indian outfits had gathered to bid him farewell. Modi played drums along with members of the Indian community before his departure for India.

Modi attended the World Leaders' summit of the 26th Conference of Parties (COP-26) to the United Nations Framework Convention on Climate Change (UNFCCC) at the invitation of his British counterpart Boris Johnson.

The COP26 is being held from October 31 to November 12 under the presidency of the UK which is partnering with Italy for the event.

The prime minister last attended the COP-21 in Paris in 2015, when the Paris Agreement was concluded, and whose implementation commences this year.

Modi held numerous bilateral meetings on the sidelines of COP-26, billed as one of the biggest ever congregations of world leaders and experts in combating climate change.

He arrived at Glasgow from Rome where he participated in the 16th G-20 Summit at the invitation of Italian Prime Minister Mario Draghi from October 30-31. Italy has been holding the presidency of the G-20 since December last year.

Modi also held a series of bilateral meetings on the sidelines of the G20 summit.

According to the Ministry of External Affairs (MEA), India is scheduled to host the G-20 summit in 2023 for the first time.

It was the eighth G-20 summit Modi attended. The G-20 has emerged as the premier global forum for international economic cooperation.

During his visit, Prime Minister Modi also called on Pope Francis at the Vatican in their first-ever one-to-one meeting. Modi invited the head of the Catholic Church to visit India. 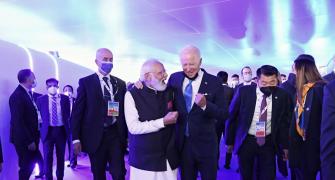 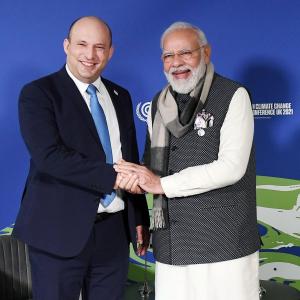 Ever Seen Modi In A Kilt?