'When one speaks to Indian intelligence officials, they will tell you "We have a better understanding of Pakistani groups than we have of our own indigenous networks".' 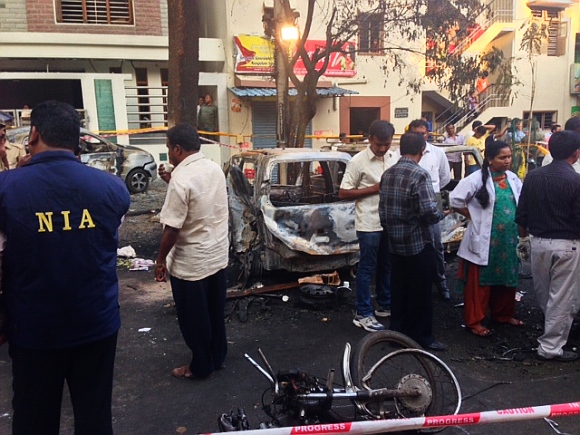 One of the foremost experts on the Lashkar-e-Tayiba believes that post-2014 -- once US and NATO troops withdraw from Afghanistan -- the Lashkar and other Pakistan-based terror groups could revive their terrorism against India.

Stephen Tankel, author of Storming the World Stage: The Story of Lashkar-e-Taiba, was the lead speaker on the panel, 'The Future of South Asian Stability', at the conference held in conjunction with the launch of the report, Trends in Militancy Across South Asia: A Region on the Brink at the Centre for Strategic and International Studies, in Washington, DC.

"India -- and especially Kashmir -- still matter to the Pakistan-based militant groups. Every group is now active in Afghanistan, but that could change post-2014," Tankel said.

Pakistan, he predicted, which has "been restraining its India-centric groups from launching massive terrorist attacks against India since 2008," could let them loose against India once again.

"The Kashmir front is torpid now -- there are rumblings of activities, but it's too soon to know if it's a blip or a trend."

"But what is important is that as Kashmir has declined, and in lieu of attacks against India, Afghanistan has become a safety valve for a lot of these groups -- Lashkar-e-Tayiba in particular. We saw an escalation there in 2010 as they were being restrained after the 2008 Mumbai blasts."

According to Tankel -- an assistant professor at American University and a non-resident scholar at the Carnegie Endowment for International Peace -- post-2014, the debate in Pakistan would centre on "whether they should concentrate externally or internally, and if externally, should the focus be against the Afghan State, residual Western forces or for the India-centric groups, should they once again re-orient against India."

If such a scenario were to manifest itself and, he warned, there are "more spillover attacks against India, we could potentially see New Delhi and Kabul providing the TTP (Tehrik-i-Taliban Pakistan) and associated militants there (in Afghanistan) the type of support Islamabad already suspects it receives."

Tankel said it would be ironic since Pakistan "could find itself facing a durable cross-border jihadist threat along the lines that it has historically supported against other countries."

It was highly unlikely that Pakistan would dismantle its terror infrastructure in the near term, Tankel added. "The ongoing insurgency in Pakistan makes it less likely that it will take action against pro-State groups (like the Lashkar)."

As a key take-away, he predicted, "Pakistan's approach to and the dynamic nature of the militant milieu, coupled with the regional tensions that are likely to ensue as the US draws down (from Afghanistan), contribute to the risk of a destabilising incident or at the very least, make it less likely that we will achieve stability in the region in the short-term."

Tankel, who conducted extensive research in India on the Indian Mujahideen last year, said this group was "probably one of the less understood militant entities in South Asia."

"When one speaks to Indian intelligence officials, they will tell you that we actually have a better understanding of Pakistani groups than we have of our own indigenous networks in some instances."

He said his research on the IM had found it should not be viewed as a group.

"I tend to look at the Indian Mujahideen as a label for a network of modules that has a loose leadership and that loose leadership moves between Pakistan and the Gulf with maybe one or two commanders on the ground."

"Familial relationships are important --- the Bhatkal brothers and their cousin in India are seen as the on-ground commanders."

Noting that they were "sanctuaried in Pakistan, but moving to the Gulf back and forth," he asked, "What does it mean in terms of support from external actors and command and control?"

"If the Indians perceive IM attacks to be sort of directed by the ISI," Tankel said, "they would respond differently than if you would have a problem that is home-grown just watered and fertilised by your neighbour."

"My sense is that the group was able to regenerate thanks to external support from Pakistan and perhaps from Lashkar-e-Tayiba as well, and that certainly there are instances where the IM does what either the Lashkar or ISI might direct it to do, but that doesn't mean that it also doesn't do things on its own."

Therein, he said, "lies one of the potential dangers in terms of India's response."

He warned that there was some indication that the Lashkar and IM networks were connecting, which "again raises concerns as to what we may see as post-2014 in particular if the ISI were to exercise control over the IM."

Predicting that the ISI might "use the Indian Mujahideen as a proxy while making progress by reining in the Lashkar," Tankel said, "I don't think we are necessarily there yet, but I would point out that it's something to keep one's eye on going forward."