‘Things are far from normal. The roads are still under several feet of water and every time we venture out, it is a nightmare wading through the water that is no longer flowing but stagnant, filthy and foul-smelling. Shops are yet to stock up on supplies. Power supply is erratic and there is constant fear that it might go off again.’

S Saraswathi recalls the horrific four days of her life. 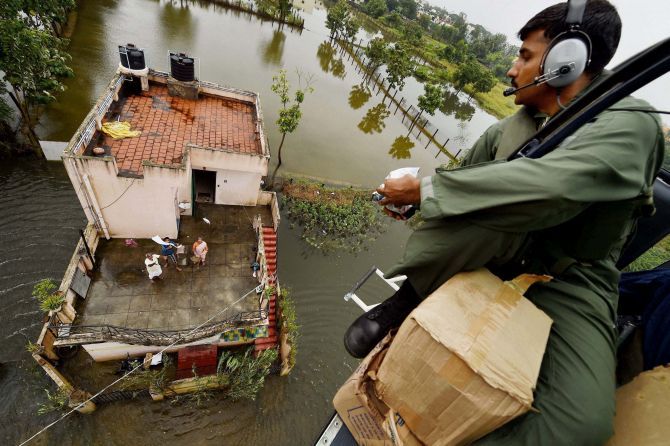 I stay on one of the many parallel roads that run along the famed East Coast Road, better known as ECR, in Chennai. The long straight road built along the coast of Bay of Bengal extends from Thiruvanmiyur (two km from my house), that was once considered the city limit, to Pondicherry, Cuddalore and beyond.

And though many of our inner roads are waist-deep in water, we have been spared the worst of nature’s fury. Our biggest problem was the power cut, which ironically left us without water in a city that was drowning under water.

It has been over a month since the north-east monsoons have ravaged Chennai, leaving it battered and flooded, but this past week was the worst. With no power and no phone network, and left completely in the dark, our fears increased manifold.

We had no idea of what was happening elsewhere in the city. The few calls that were able to go through brought us the news that most of the city was under six feet of water. There are more than 100 families staying in our apartment and rumors flew thick and fast. There was talk about lakes breaching their banks, roads caving in and bridges on the verge of collapse.

Though very scary, it somehow seemed like an exaggeration. Unfortunately, when we finally got a newspaper on Friday morning, we realised that things were even worse than our worst imagination.

Helicopters kept making their rounds overhead and my thoughts went back to those dreadful days after the tsunami when they flew nonstop throughout the day. My flat is just about 500 metres from the beach and that last week of December 2004 still brings nightmares. This week has been almost as bad for us Chennai-ites.

A few months ago, I remember reading a newspaper report that abishekams, yagnas and special pujas were conducted at major temples throughout the state for copious rainfall this year.  So were these destructive rains the blessings of god?  Is this god’s way of telling us to be careful what we wish for, that sometimes you may get what you wish for? Whatever the reason, never again will Chennai-ites find the courage to complain about our hot sunny days or plead to the gods for rain. 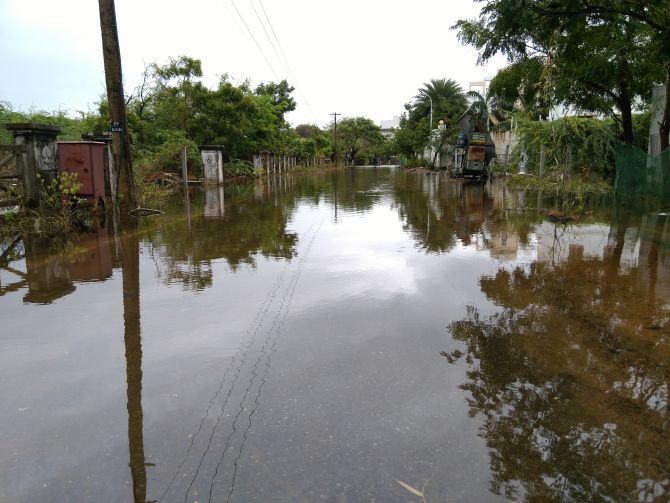 Image: One of the roads that were completely submerged during the rains in Chennai. Photograph: S Saraswathi.

It all started last Tuesday morning that ironically dawned bright and clear. But within hours, and with absolutely no warning (we are usually treated to a lot of thunder and lightning with little or no rain), it began to quietly pour. There was surprisingly no breeze and it was growing darker by the minute. Soon there were no signs of daylight; by early afternoon it seemed like night. By evening the power supply went off and came back several times.

We heard of low-lying areas in Velachery and Tambaram getting flooded and that the power supply had been cut in several areas. The downpour continued through the night and early morning was plunged in darkness.

Transformers and electricity board offices in most areas were under several feet of water, forcing the officials to cut off power supply.

There was about a feet of water below our apartment and as it rapidly began to climb the first few steps of the ground floor houses, many families decided to move out. Most left with a few belongings in their car, some to relatives and friends in the city and others to cities like Coimbatore and Bangalore. A few even moved to hotels in the city, where they hoped there would be power supply.

My immediate concern was not the rising water, but the steady drip from the ceiling of my third floor apartment. Though usually manageable, by moving the furniture about or covering them with sheets, this time it was impossible as the ceiling in almost the entire house was dripping. I spread out buckets and all the big vessels I could find, but nothing seemed to work. The entire house was in ankle-deep water. I packed off the TV, the computer, loaded the bed with everything it would hold and covered it with a plastic sheet. Everything else was pushed to the few places that were not dripping or just left to the fate of the rain Gods.

I am a huge devotee of Shirdi Sai and the other bedroom that I also use as a prayer room was better than the others. There was a little space, about two metres square, in front of the puja stand that was dripping at just one place so I pushed my bed towards it, kept a bucket below the drip, and that area was our only refuge till Sunday morning.

The next three days passed in mostly prayers, and yearning for a little bit of sun. Every time the sun came out most of us were on the roof trying to see what was happening around us. By Wednesday night, there was no water in any of the apartments. Not to drink, cook, or even in the bathroom.

Thursday morning, a bunch of us waded through thigh-high water to reach the EB office which was swimming in water where the officials said that the mains from Tharamani had been cut and there was no hope of any power supply for the next three-four days. 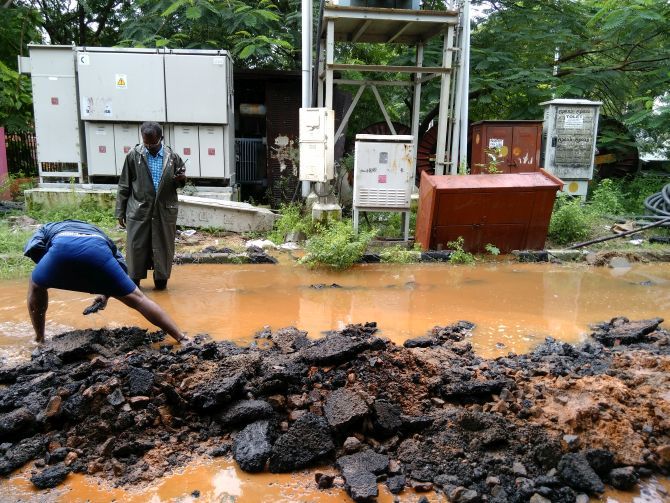 Image: An electricity junction box lies submerged in the rain water. Power supply was cut off in most parts of the city owing to the flooding. Photograph: S Saraswathi.

Frustrated and anxious, we returned home. Someone suggested taking water from the well that was brimming to the top. The water had risen so high we could just dip our buckets by hand and take the water out. Many youngsters got together and carried water to all the flats. Later we heard that a lorry carrying milk packets had arrived at a junction 500 metres away. Despite the heavy crowd, most of us came back with one packet (500 ml).

Some of the vegetable vendors too were open, but the prices were ridiculous. I paid Rs 580 for vegetables that would have usually cost me about 100 rupees. Water cans, which were usually priced at Rs 30-40, were scarce and being sold at Rs 120-150.

Most stores had run out of bread, biscuits, chips and other snacks. The nights were the worst; with sewage water overflowing along with the rainwater, mosquitoes and other insects were having a field day. Candles, torches and batteries were out of stock. None of us slept, we sat in each other’s houses lighting the mud lamps that were plenty because of the Tamil Kartigai month during which it is a custom to light lamps every day after dark.

Friday morning we were able to get a newspaper along with our packet of milk. And that’s when it hit us. We realised what we had escaped from and how we had no right to complain. Faces were grim and conversations turned serious. Many were not able to reach their loved ones in other parts of the city. Though a few landlines were working, we were not able to contact anybody inside the city, as the mobile networks were still down.

Even as we were getting ready for another long sleepless night, suddenly the power came back. It was around 8.30 pm on Friday; we could hear loud cheers from the flats all around us.  Despite the leaking roof, my husband, son and I finally slept soundly under the fan with a bucket between us to collect the dripping water.

Saturday came as a huge relief, there was water in the taps and we could finally take a shower. On Sunday, as I write this, the rains still continue at regular intervals. But my ceiling is slowly drying and my walls are less damp. I finally uncovered my computer and decided to get on with some work.

Things are far from normal. The roads are still under several feet of water and every time we venture out, it is a nightmare wading through the water that is no longer flowing but stagnant, filthy and foul-smelling. Shops are yet to stock up on supplies. Power supply is erratic and there is constant fear that it might go off again.

It will be weeks, probably months, before the city recovers from this onslaught of the benevolent rain Gods. But the belief that the worst is over is what will hopefully keep us going. 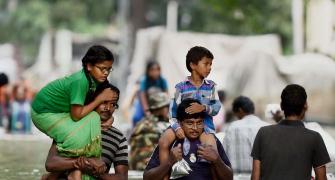 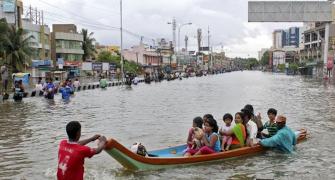 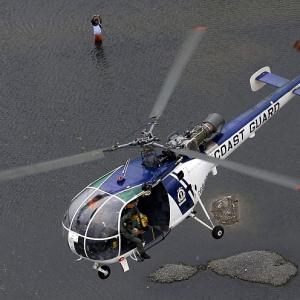