The Bharatiya Janata Party on Saturday said its top leaders will attend the oath-taking ceremony of Narendra Modi as Gujarat chief minister on December 26.

"We have registered a historic victory in Gujarat under Modi -- we congratulate him for his efforts," he said.

"It is BJP's third consecutive term in Gujarat and the party will be forming government in the state for the fifth time," Rudy said.

Asked whether Modi is a prime ministerial candidate for BJP, he said "Modi has been a senior national leader -- he has a national image -- before taking over as Gujarat CM, he was the party's national general secretary."

"When our party makes any such decision, media would be conveyed about it", Rudy said. 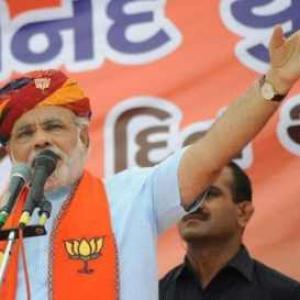