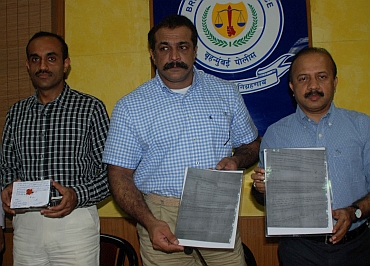 Fourteen people, including two professors of a college, four Mumbai University peons and five students, have been arrested in connection with the leak of three engineering exam question papers set up by the University last month, police said on Tuesday.

The papers of Basic Electrical and Electronics Engineering -- for ATKT (allowed to keep term) students held on May 26, Applied Physics-II and Maths-II paper for first-year students of Mumbai varsity held on May 23 and May 18 respectively were leaked hours before the scheduled examinations. However, the exams were held as per the schedule.

The other arrested accused are Paresh Tendulkar, Vikas Ujjainwala, Premchand Kamble, Bharat Singh, Ganesh Jadhav -- first four are peons at Mumbai University and Jadhav works as peon in a private school-- and Shadaab Raut, Anirudh Musale, Gaurav Talekar, Kiran Labde and Sunil Mohite -- all five are students, who were not examinees.

Following the media reports of question papers leak, the deputy registrar of Mumbai University has lodged complaint with the city police, following which, the crime branch started probing the matter.

Explaining the leakage of the BEEE paper, Joint Police Commissioner (Crime) Himanshu Roy said that professors Lad, who also run a private coaching class, and More had asked Gaikwad of Yadavrao Tasgaonkar Ccollege if he could leak the question paper.

Gaikwad then approached Lad, who works as a lab operator from the same college as professors.

Lad knew that one of the lady professors from his college, sets up the BEEE exam paper for the Mumbai University. Lad managed to take the photocopy of the question paper set up by the lady professor and gave it to Gaikwad, who in return handed it over to the two professors, who sold them to the students close to them, police said.

Explaining the leak of the Applied Physics-II and Maths-II question papers, Roy added the investigators got a tip-off that Ganesh Jadhav, working as a peon in a private school at Nallasopara, had been selling the leaked papers to the students, police added.

Jadhav was picked and his interrogation revealed that the papers reached him through Tendulkar, Ujjainwala and Kamble, who got the papers from Singh, working as a peon in Mumbai University manuscript department.

Singh managed to open the sealed exam copies from the manuscript department and then gave them to his colleagues for a certain amount which is yet to be ascertained, police said.

"These question papers reached the students, who knew the professors and peons very well," Roy said adding that each paper was sold at a price anything between Rs 500 to Rs 10,000.

"Some students, who got the leaked papers sold them to other students to recover their money. Because of this, these papers exchanged many hands," Roy said.

One of the students had even uploaded one of the leaked question paper on the Facebook, making the cop's efforts to reach the root of the case easier, police said.