4 killed in attack on Indian-owned ship in Nigeria

Four persons, including two soldiers, were killed when a ship belonging to an Indian company was attacked by pirates in Nigeria's oil-rich southern delta.

The four persons killed, included two soldiers, a retired naval officer and the pilot of the tugboat which ran into an ambush yesterday after setting sail from Warri in DeltaState to Port Harcourt in Rivers State, Nigeria's Thisday newspaper reported.

A gun battle between men of the Joint Task Force and pirates in BayelsaState ensued during the ambush. The ship belongs to Sterling Global Services Limited, a venture of an India-based company called the Sandesara Group.

Nwachukwu said two soldiers were killed but failed to confirm the death of the retired soldier and the ship captain and said three pirates were also wounded by soldiers who returned fire.

One inmate of the ship was also missing while two other soldiers sustained serious injuries during the shootout that followed, he said.

Nwachukwu could not give any reason for the attack because the boat and the escorting vessels were empty. According to him, the military has sent five gunboats to nab the pirates and security has been heightened in Bayelsa state where the incident took place.

Two months ago, five Indians were abducted by heavily armed pirates who attacked the vessel, Medallion Marine, in which they were travelling about 60 kilometres off the coast of oil rich Niger Delta and commercial capital, Lagos.

They were released after a month. Attacks on ships is common in Nigeria's oil rich region and in most cases the purpose is kidnapping for ransom while in some cases oil theft is the motive. 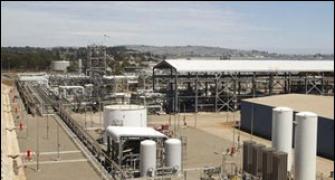 Grenade attack near Pak Air Force base in Karachi