By Mohammed Siddique
October 11, 2009 19:00 IST
Alampur town in Mehbubnagar district, not far from the flood-ravaged Kurnool city, is yet to recover from the devastating natural calamity, even though 11 days have passed since the floods submerged this historic temple city.

Till Saturday the town of 20,000 population was renowned for its ancient temples dedicated to Lord Siva and was called as 'Dakhsihna Kashi' (Or the Kashi of south) but today nobody even wants to enter the village as the streets and houses in Alampur are covered with two feet of slush and an unbearable stench was pervading the town making it difficult to breath.

The few families who had waded through three or four feet of stinking and stagnated flood water to return to their homes and tried to clean them of the slush have given up in frustration after making all the possible efforts.

"It is not possible to get rid of the black soil which is deposited in our homes by the floods," said 25-year-old Srikant, who had rushed from Kurnool to help his family on hearing about the floods.

Balaji, a 37-year-old government employee, said that the floods in Tungabhadra and the backwater from Srissailam dam together had pushed as much as 10 to 15 feet of flood water in to the town leaving not a single house safe or unaffected.

"We have lost each and every item of our house. Nothing is left," said Mukhtar Basha who ran a building material yard. "My family has suffered losses to the tune of Rs 4 lakh and do not know how to recover," Basha added.

Manikantamma, a 50-year-old lady trying to return to her home, pointing towards Gandhiji's statue in the middle of a square said, "Water was higher than his head. If we had not escaped in time, we would have all died," she said.

Mumtaz Khatoon, who was staying with 30 members of her extended family in a makeshift relief camp in a school outside the town, refused to go back.

"We cannot live there again. I am told my home is full of snakes and stench has made it impossible for us to even think of return." She along with many other inmates of the relief camp told rediff.com that the only option before the government was to rebuild the village at some other place. "We dont want to live there again. The place is not inhabitable," she said.

The angry and frustrated residents of the village put same demand forth before a group of ministers led by D K Aruna and before the district collector K Damayanti. They have assured the victims to look into the their demands. Other government officials including the revenue divisional officer Ashok Kumar agreed that there was no option other than relocating Alampur town to some other place because its old location was vulnerable to such a disaster.

Such a relocation of the population had also become necessary because after such a long submergence, the houses had become too insecure and unsafe.

"If we have not died in the flood, we will surely die in the house collapse,' said Srinivas, a local youth. "If they force us to return to the same homes, we will commit suicide by consuming poison," he warned.

A boundary wall constructed along the banks of Tungabhadra to keep it separate from the town has become its bane as the water came into the town by flowing over the wall but now the same wall was preventing the flood water from getting out.

"People did not listen when an MLA had said that the wall should be restricted only up to the area where temples are located and now they are paying the price," said Shaikh Wali Baba, a 65 year old resident.

"We never faced this kind of situation in the past and I pray that even worst enemy should not have to pass through such pain and agony," Baba said.

Alampur has 9 Nava Brahma temples as well as a Jogulamba temple dedicated to Durga and had witnessed massive Durga Puja or Dussehra celebrations just a few days before the unprecedented tragedy in the town. Some of the temples in the town date back to sixth and seventh century. 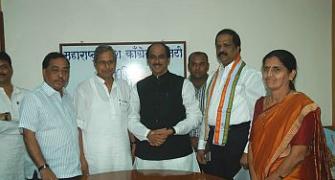 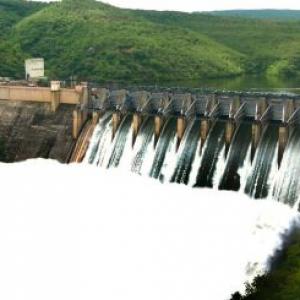 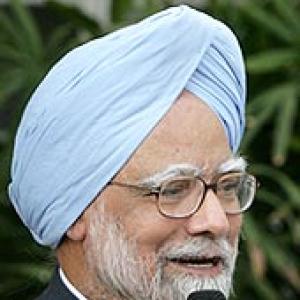