'While fighter pilots must not be sent into combat in inferior aircraft, an obsessive quest for outright combat superiority will leave an air force short of numbers,' says Ajai Shukla. 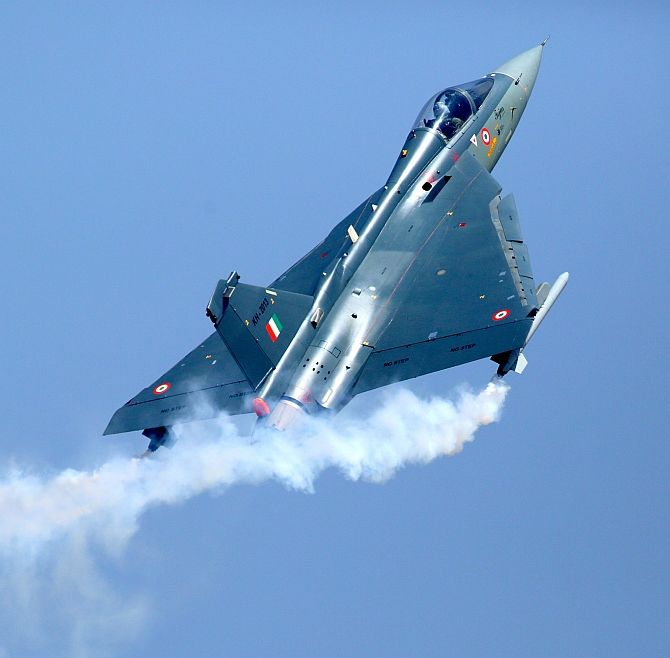 Air Force Day, celebrated on October 8 each year, provides occasion to revisit the Indian Air Force's biggest worry -- its declining squadron numbers -- and to examine how this could be reversed within its budget.

Military planners estimate that the IAF needs 42 fighter squadrons to tackle a two-front threat from Pakistan and China.

Against this, the air force has just 33 squadrons, including 10 squadrons of obsolescent MiG-21 and MiG-27 fighters overdue for retirement.

True, new Tejas and Sukhoi-30MKI fighters are rolling off the lines, but not quickly enough to replace the retiring MiGs, leave alone increasing the number of squadrons.

Each fighter squadron should have 21 aircraft, including 16 single-seat fighters, two twin-seat trainers (which would fly combat sorties in wartime) and three aircraft as maintenance reserves.

The IAF has about 600 fighters, and calculating at 21 fighters per squadron, this adds up to just 29 squadrons.

That means many of the IAF's 33 squadrons operate with fewer fighters than the 21 authorised.

So why is the air force not allocated more money to quickly buy more fighters?

The IAF has already been allocated 43 per cent of the capital budget, which pays for new equipment.

Additional capital allocations are possible only by raising defence spending (at the politically costly expense of social sector spending and infrastructure creation), or at the expense of the army or navy.

The army, despite its massive size and urgent need for artillery guns, infantry equipment and air defence weaponry gets less than a third of the capital budget.

Reducing it is impossible.

The navy, which plays a growing role in the Indian Ocean, is as short of warships as the air force is of fighters and cannot countenance its modernisation budget falling below the present 25 per cent.

The answer, obviously, is for the IAF to spend more judiciously.

The IAF's misguided quest to own all flying machines, including attack helicopters that fight the land battle and should rightly belong to the army, has resulted in the IAF spending some $2 billion on 22 Apache attack helicopters -- money that could have gone out of the army's coffers.

The IAF must also balance between, on the one hand, buying pricey, cutting-edge fighters like the Rafale that it can afford only in small numbers; and, on the other hand, acquiring inexpensive workhorses that provide the numbers needed to cover India's vast airspace.

While fighter pilots must not be sent into combat in inferior aircraft, an obsessive quest for outright combat superiority will leave an air force short of numbers.

A telling example is the IAF's Rafale purchase, where exorbitant cost (Rs 686 crore/Rs 6.86 billion per aircraft, Rs 58,000 crore/Rs 580 billion for the deal with add-ons) has left the IAF with just 36 fighters instead of the 126 that were tendered.

Everyone disregarded Stalin's dictum: 'Quantity has a quality of its own.'

Building up quantity, without sacrificing quality, requires the IAF to progress on five simultaneous tracks.

The air force chief recently stated, without elaborating, that by the IAF's centenary in 2032, its squadron strength would reach authorised levels.

In a country where even annual plans are seldom met, this projection is so far into the future as to be practically meaningless.

The IAF must clearly elaborate how it will meet its targets, and lay down mid-course milestones for 2025.

To stimulate this process, here is a five-point road map.

Along with three Mirage 2000 and three MiG-29 squadrons already being upgraded, this would keep 10 squadrons of capable (though not cutting-edge) fighters flying for another 15 years till 2032. The upgraded Jaguars could serve some years beyond that.

The IAF has initiated the acquisition of 84 Tejas Mark 1A fighters (four squadrons). This will have four improvements over the initial Tejas -- AESA radar for added combat capability; air-to-air refuelling to increase combat range; an externally-mounted 'self-protection jammer' to blind enemy radars, and tidier internal systems to increase maintainability and reduce 'turnaround time', that is how quickly a refuelled and rearmed Tejas can leave on a fresh mission after returning from an earlier one.

Improving the Tejas incrementally could give the 2032 fleet eight Tejas squadrons.

Simultaneously, the IAF must strongly support the indigenous AMCA.

Having a fully-developed and flight-tested AMCA by 2032 is vital for replacing the upgraded MiG-29s and Mirage 2000s that begin retiring that year, followed by the Jaguar.

Expediting the conclusion of a contract to build a single-engine fighter in India with foreign collaboration would benefit the AMCA by galvanising an indigenous aerospace eco-system.

Third, the IAF must drive the contract for Hindustan Aeronautics Ltd to partner Sukhoi in co-developing and manufacturing the Fifth Generation Fighter Aircraft. This heavy fighter would replace the Sukhoi-30MKI, when that IAF workhorse ages.

In July, a defence ministry expert committee ruled that the technological expertise Indian engineers would gain from working with Russian experts would also feed positively into the AMCA project.

HAL chief T Suvarna Raju says if India acted quickly, it would get to co-design the heart of the FGFA's combat systems, including navigation systems, radars and weapon aiming devices. This would translate into the ability to upgrade the FGFA mid-way through its life cycle.

Further, the FGFA co-development is incredibly cost effective -- India will pay just $3.1 billion. There is no reason to delay this project.

Fourth, paradoxically, considering that buying the Rafale was a financial blunder, the IAF must now procure two more squadrons.

The Rafale will be the IAF's eighth fighter type when it joins (sixth if one discounts the MiG-21 and MiG-27 on their way out), and it makes little sense to create basing and maintenance infrastructure for just two Rafale squadrons.

The challenge is as clear as the opportunities. Can the IAF and defence ministry get their acts together? 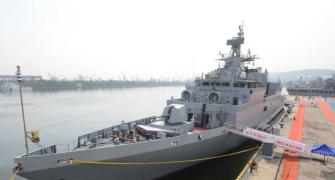 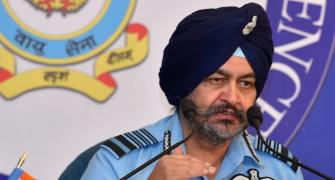