The Federal Bureau of Investigation on Wednesday defended its decision not to monitor Wade Michael Page, the gunman who killed six people at a Gurdwara in Wisconsin, citing civil liberties and rights to its citizens enshrined in the Constitution.

Federal officials said that they can't open an investigation against anyone in the country based on what they say or what they want.

"To what extent we have -- tracking white supremacy group, -- this is an issue where law enforcement has to continually balance the civil liberties, the rights that every US citizen has, to think what they want, believe what they want and say what they want," FBI Milwaukee Special Agent in-Charge Teresa Carlson told reporters at a crowded news conference in Oak Creek.

"Obviously, we cannot investigate people for any of those things. So no matter how horrendous or reprehensible those things may be, until somebody actually threatens, there's a threat of force or violence, we cannot open an investigation on them," Carlson said as she defended the FBI decision not to monitor the activities of Page even as he was on the radar of several private organizations keep a track on his activities.

Kathy Wright, spokesperson FBI national press office said, "Law enforcement is challenged every day to balance the civil liberties of US citizens against the need to investigate activities of possible criminal conduct.

"No matter how offensive to some, we are keenly aware that expressing views by itself is not a crime and the protections afforded under the Constitution cannot be compromised," she said.

The FBI, she said, is aware of reports indicating the subject of the shooting had affiliation with extremist organisations to include white supremacists.

"Our investigation is looking into any associations he may have had with extremist groups," the officer said.

"We are not aware of any specific threats posed by this subject prior to the shooting," Wright said. 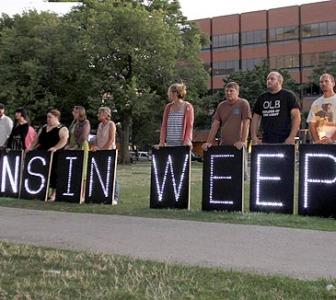 A deadly mix of white supremacy, ignorance, hatred
'No motive established yet in gurdwara killing'