Egypt's streets continued to simmer with anger with 10 lives lost over three days, as fuming protesters clashed with the police over its failure to prevent Port Said's unprecedented football violence.

Police in Cairo fired teargas and birdshots at protesters who tried to march on to the interior ministry and threw stones at security forces guarding the building on Saturday.

Six people died in the eastern port city of Suez, as police used live rounds to hold back crowds on Friday, according to a report in Al Jazeera.

Three protesters were also killed in Cairo as crowds broke down walls and barbed wire barriers to reach the heavily guarded interior ministry.

The government said one soldier was also killed when a riot police truck hit him and more than 2,500 people were injured in the clashes.

The fresh unrest in Egypt began on Thursday as angry protesters took to the streets, shaken by violence that occurred after a soccer match in the northern city of Port Said.

The protesters chanted anti-military slogans as witnesses said riot police did little to prevent the violence when fans of the victorious Al Masry club flooded the ground and chased the players and supporters of the popular club Al Ahly.

Many anti-government activists and hardcore fans of Egypt's popular clubs, known as 'ultras', have blamed the country's military leadership for either conspiring to foment the Port Said violence or negligently allowing it to occur, said Al Jazeera.

The 'ultras' have been among those at the forefront of last year's uprising that overthrew Hosni Mubarak and the following anti-military protests.

The channel also pointed out at a "security vacuum" in the country that is going through a delicate phase of transition to democracy, a year after the fall of an entrenched dictator.

The protests were not limited to Cairo and Suez. In southern Egypt's Minya governorate, 11 people were injured in protests outside the security directorate and police station.

In Alexandria, tear gas and fireworks were traded between security forces and protesters into the night outside the main security directorate.

The protesters demanded retribution for the deaths that occurred on Wednesday. While most deaths happened due to the stampede, several people reportedly died of stab wounds.

Fans of the home side Al Masry had stormed the pitch after a 3-1 victory against visiting favourites Al Ahly. Witnesses said security forces had allowed men into the stadium carrying knives and sticks.

Egypt has witnessed periods of unrest for a year with protesters, frustrated at the slow pace of reforms, taking to streets repeatedly to demand that the military cede power to a civilian government quickly. 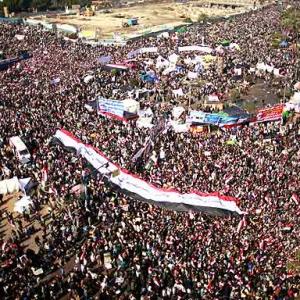