The National Investigation Agency is probing a hawala transaction from Dubai which they believe was used to carry out Hyderabad’s twin blasts last week. Vicky Nanjappa reports.

A hawala transaction from the Al Quasis industrial area in Dubai to Hyderabad a week before the twin blasts is a subject matter of investigation today. Officials in the NIA informed rediff.com that this is a suspicious transaction and was used to carry out the Hyderabad twin blasts.

This transaction amount of around Rs 2 lakh is alleged to have been made by a Dubai module of the Indian Mujahideen and was collected at Hyderabad last year, and used for the blasts sources say.

While the plan to carry out the attack was hatched over a year back, the final modalities only began around 10 days before the attack. The material to prepare the bomb was sourced and the foot soldiers entered Hyderabad and stayed at lodges while finalising the attack.

Around this time, a transaction from Dubai was made, which was collected by a person alleged to be part of the IM and used for the attack. It appears that the money was transferred at the last minute since the perpetrators seemed to be aware of the fact that the agencies would take a while to pick up a suspicious transaction, scan it and place it under their radar.

Four persons who have come under the scanner following this transaction are Tahseen Shaikh, a resident of Bihar, Tabrez from Azamgarh, Yasin from Bhatkal and Waqas from Uttar Pradesh.

There appears to be coordination between these four persons and Shaikh is said to have collected this money in Hyderabad. Shaikh has been on the radar of the Maharashtra Anti Terrorism Squad since the July 13, 2011 blasts, and he is believed to be an active IM operative.

The Maharashtra ATS had given out details regarding Shaikh after the 13/7 blasts as they believed that he was one of the men who had planted the bomb at Dadar. His name re-surfaced after the Pune blasts too and even the interrogation of the IM suspects by the Delhi police reveals his name.

It is still unclear if the hawala operation was operated by Riyaz Shahbandri from Bhatkal. There is not much clarity regarding where exactly Riyaz is at the moment, but intelligence agencies believe that he is still holed up in Pakistan and travels to Sharjah regularly.

He may have been instructed to make the transaction from Sharjah and Dubai to avoid a trail to Pakistan, Intelligence Bureau officials believe.

Although no arrests have been carried out as yet in connection with the blasts, it is clear that the entire plan and operation was hatched by four persons whose names have been mentioned above. Maqbool may have been part of the initial plan, but it is the four absconding operatives who had executed the attack.

Normally, the IM uses foot soldiers to plant a bomb at any site. However, if we look at the 13/7 and now the Hyderabad attacks, it is clear that their main operatives have been on the field. They did not want to risk a failed operation and hence have taken part in the attack themselves.

The police suspect that Shaikh, Waqas and Tabrez may have been at the spot that night and the control was with Yasin who may be hiding in Tamil Nadu. The CCTV footage which is their best bet has been sent for analysis to Gujarat and the investigators are also seeking help from the Maharashtra ATS and the Delhi police to put a face on the terrorists who planted the two bombs at Dilsukhnagar that night which killed 17 people and left over a 100 injured. 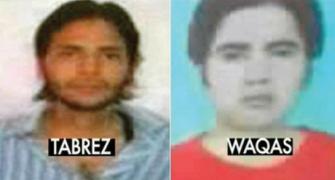 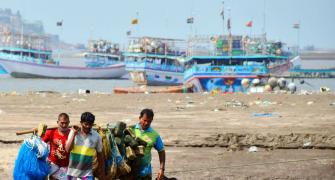