Goa's former Tourism Minister and controversial Nationalist Congress Party leader Fransisco 'Miccky' Pacheco on Friday resigned as a member of the legislative assembly, two months ahead of the State elections.

The former minister is the third MLA to resign. Two Bharatiya Janata Party legislators - Rajesh Patnekar and Dayanand Sopte  had quit last month and joined the Congress, which is heading the coalition government in the coastal state.

The resignations have brought down the strength of 40-member House to 37. NCP, which is part of the ruling combine, has two MLAs now.

Pacheco told reporters he has decided to join Goa Vikas Party (GVP), a regional outfit headed by his wife Viola.

GVP had become defunct but it has been rejuvenated ahead of the assembly elections on March 3.

The legislator had to lose his ministerial berth after his name cropped up in a criminal case last year. He was accused by the police of abetting the alleged suicide of Nadia Torraddo, his close friend.

Pacheco was also investigated by the Central Bureau of Investigation for alleged money laundering offence. 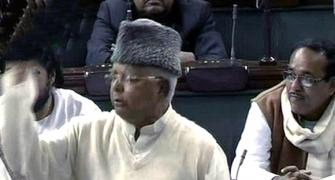 Congress-led govt SHOULD NOT get away with their sins