The Supreme Court on Tuesday asked the Centre to clarify its stand on whether it wants to go ahead with its curative petition seeking Rs 7,844 crore as additional funds from successor firms of the US-based Union Carbide Corporation (UCC) for giving compensation to victims of the 1984 Bhopal gas tragedy. "We have to see there has to be quietus in the matter. The government will have to take a stand whether it is going to press the curative petition or not,” the bench, also comprising Justices Sanjiv Khanna, A S Oka, Vikram Nath and JK Maheshwari said.

Advocate Karuna Nundy, appearing for the victims, submitted  the court should hear the affected parties irrespective of the government's decision.

Senior advocate Sanjay Parikh, also a counsel for the victims, said the number of people affected has increased five times and hearing should commence.

At this juncture, the apex court wondered if the compensation amount could keep changing over time like that.

"Can it be said something happened five years, 10 years later? Any system must provide for certainty. There cannot be perpetual uncertainty. There is no ideal situation for anything," the bench said while deferring the matter.

The UCC, now owned by Dow Chemicals, gave a compensation of USD 470 million (Rs 715 crore at the time of settlement in 1989) after the toxic methyl isocyanate gas leak from the Union Carbide factory on the intervening night of December 2 and 3, 1984 killed over 3,000 people and affected 1.02 lakh more.

The apex court is to hear the curative petition filed by the Centre seeking a direction to Union Carbide and other firms for an additional Rs 7,844 crore over and above the earlier settlement amount of USD 470 million.

The survivors of the tragedy have been fighting for long for adequate compensation and proper medical treatment for ailments caused by the toxic gas leak.

The Centre had filed the curative petition in the apex court in December 2010 for enhanced compensation.

The then UCC chairman Warren Anderson was the prime accused in the case but did not appear for the trial.

On February 1, 1992, the Bhopal CJM court had declared him an absconder.

The courts in Bhopal had issued non-bailable warrants against Anderson twice in 1992 and 2009 before his death in September 2014. 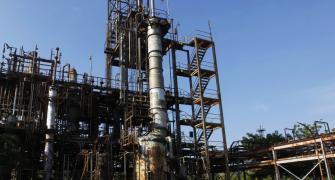