Consolidating its position, the Bharatiya Janata Party wrested high-profile Rampur and Azamgarh Lok Sabha seats in Uttar Pradesh from the Samajwadi Party and won three assembly seats, including that of Chief Minister Manik Saha, in Tripura in by-election results announced on Sunday. 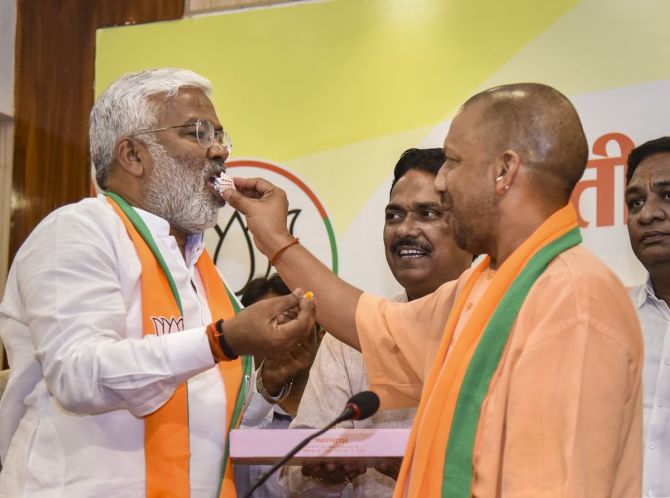 IMAGE: Uttar Pradesh Chief Minister Yogi Adityanath and UP BJP president Swatantra Dev Singh feed each other sweets as they celebrate the party's victory in the by-polls, in Lucknow, on Sunday, June 26 2022. Photograph: PTI Photo

While the Aam Aadmi Party lost Punjab's Sangrur parliamentary constituency, vacated by Chief Minister Bhagwant Mann, to Shiromani Akali Dal (Amritsar) leader Simranjit Singh Mann, it was able to retain Rajinder Nagar assembly seat in Delhi that party leader Raghav Chadha had given up after he was elected to Rajya Sabha.

The Congress won a seat each in Tripura, where it opened its account after drawing nil in the last assembly polls, and Jharkhand, while the ruling Yuvajana Sramika Rythu Congress emerged victorious in Atmakuru assembly seat in Andhra Pradesh.

Counting of votes was held on Sunday for the June 23 by-election to three Lok Sabha and seven assembly seats spread across five states and Delhi.

In Uttar Pradesh, the opposition Samajwadi Party suffered a major setback as it lost to the BJP in its strongholds of Azamgarh and Rampur Lok Sabha seats, vacated by SP chief Akhilesh Yadav and party stalwart Azam Khan after they were elected to the Assembly.

Prime Minister Narendra Modi termed the BJP victory as 'historic', asserting that this indicates wide-scale acceptance and support for the 'double engine' governments at the Centre and in Uttar Pradesh, a reference to the party being in power in both places. 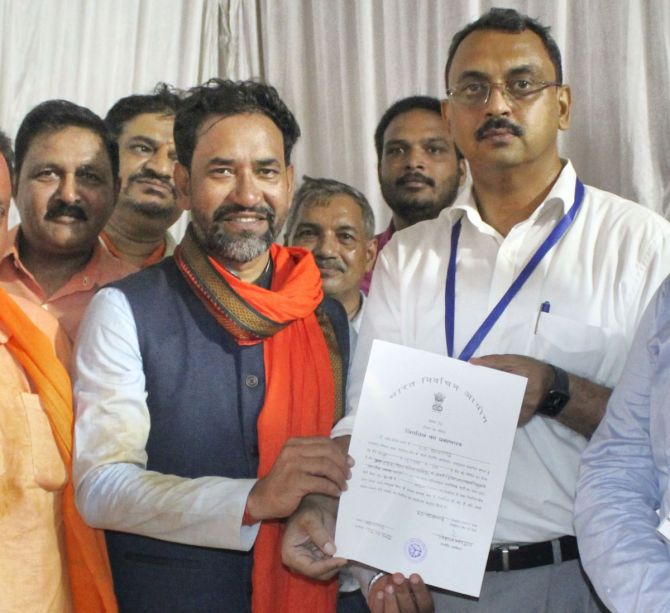 Ruling candidate Ghanshyam Lodhi won the Rampur parliamentary seat by a margin of over 42,000 votes.

In Azamgarh, BJP candidate Dinesh Lal Yadav 'Nirahua' defeated Dharmendra Yadav by a margin of 8,679 votes. Dharmendra is a cousin of Akhilesh Yadav and a three-time MP.

Akhilesh Yadav, rankled by the defeat, lashed out at the BJP and accused it of murdering democracy.

"The chronology of murder of democracy in BJP rule: ... misuse of force to prevent voting, irregularities in counting, pressure on public representatives and dismantling the elected governments... ." The seat was won twice by AAP leader and Chief Minister Bhagwant Mann.

The defeat came just three months after AAP registered a resounding victory in the assembly elections when it won 92 of the 117 assembly segments.

SAD-Amritsar president and candidate Mann, 77, has been elected from Sangrur nearly 23 years after winning the seat in 1999.

The BJP received a boost in Tripura winning three of the four assembly seats.

Chief Minister Manik Saha won the by-election from the Town Bardowali seat by a margin of 6,104 against his nearest rival Asish Kumar Saha of the Congress.

The BJP leader, in his maiden assembly election, secured 17,181 votes, which is 51.63 per cent of the total votes polled. "The people who voted for me, I thank them. This is the victory of BJP workers. I expected the margin to be a bit more. However, the results prove the understanding between the CPI-M and Congress. We will work accordingly in the future, but people did not take this understanding in a good way," the chief minister told reporters.

The Trinamool Congress, which was looking to make inroads in the northeastern state, performed dismally with its candidates losing deposits in all the seats.

At least 19 people including Tripura Pradesh Congress Committee chief Birajit Sinha were injured in a clash between Congress and BJP supporters in front of Congress Bhavan in the state capital after the results of the by-elections for four assembly seats were declared. 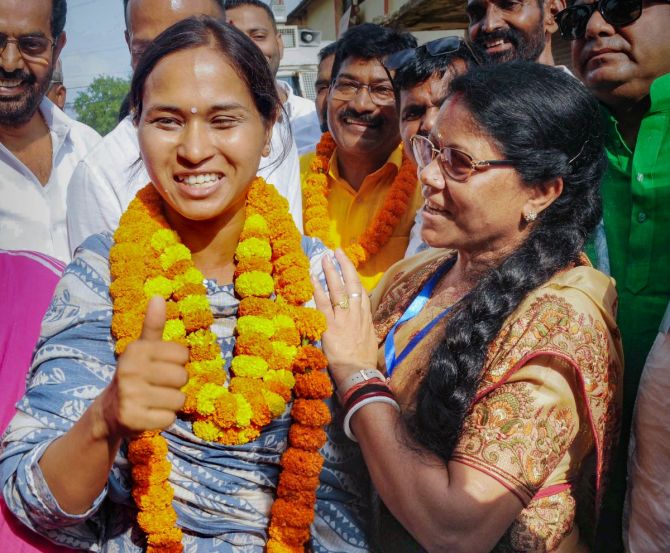 The ruling YSR Congress retained the Atmakuru Assembly seat in SPS Nellore district of Andhra Pradesh by a huge margin of 82,888 votes.

YSRC's Mekapati Vikram Reddy secured 1,02,241 votes against his rival G Bharat Kumar Yadav of the BJP, who managed to get only 19,353.

In his tweets, Prime Ministter Modi also thanked people of Tripura for reposing faith in the party's development agenda and voting its candidates, including Chief Minister Manik Saha, to victory in assembly by-polls.

"Our government will continue fulfilling people's aspirations. I laud our karyakartas for their hardwork," he said, while also praising BJP workers from UP.

"Gratitude to all those who voted for the BJP in Andhra Pradesh, Jharkhand, Delhi and Punjab. We will keep working among the people and keep raising issues of public welfare," he added.