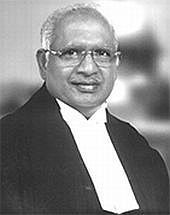 In further embarrassment for former Chief Justice of India K G Balakrishnan, the Income Tax investigation into allegations of amassment of wealth against three of his relatives, have found black money in their possession.

"As far as Justice Balakrishnan is concerned, I cannot say anything. But as far as his relatives-- two sons-in-law and brother are concerned, we have found there is black money," Director General of Income Tax (Investigation), E T Lukose, told mediapersons in Kochi.

"We are investigating how they have got the black money. We will again question the relatives," he said. The official refused to state the quantum of black money with the three relatives of justice Balakrishnan.

Lukose refused to say whether Justice Balakrishnan will be questioned or not.

"I cannot say anything now," he said. The period of investigation is the last five years, he said.

Lukose said the probe was in the final stages and was likely be completed by next month. The Central government has not so far asked us, the IT investigation wing, for any report, he said.

The investigation wing had at first conducted a 'preliminary enquiry' into the allegations of amassment of wealth against the relatives of Justice Balakrishnan.

After the allegations broke out, Bhaskaran, a special government pleader of the Kerala high court, had resigned.

Media reports had alleged that his relatives had amassed properties worth several crores in the past few years mainly in posh localities in various places in Kerala.

What happened to complaint against ex-CJI: SC