Strongly reacting to the alleged communal statement made by Majlis-e-Ittehad-ul Muslimeen Member of Legislative Assembly from Andhra Pradesh Akbaruddin Owaisi, the Bharatiya Janata Party on Thursday demanded his immediate arrest and expressed its anger at the Centre's 'deafening silence' on the issue.

Former finance minister and BJP Member of Parliament Yashwant Sinha on Thursday issued a statement seeking action against Owaisi for the speech. Sinha described the speech as "pure poison" and "objectionable in the extreme".

"Owaisi should be arrested immediately and brought to justice. His membership of the assembly should be ended forth with and he should be peremptorily disqualified from contesting all future elections," said Sinha.

The BJP leader said that such tendencies must be nipped in the bud by meting out exemplary punishment to Owaisi so that it serves as a deterrent to all such wrong doers.

Owaisi, brother of MIM Member of Parliament Asadudin, is a MLA from Chandrayangutta assembly constituency in Andhra Pradesh. He had allegedly used inflammatory and derogatory words against a particular community in a public speech at Adilabad last week.

Sinha also wondered why the Centre and the Congress government in Andhra Pradesh have not spoken out on the issue.

"The deafening silence of the government of India and the shameless behaviour of the chief minister of Andhra Pradesh indicate the warped mindset of the Congress party towards minority communalism," he said.

The BJP leader maintained that Owaisi's comments violate the law, the spirit of the Constitution and the values the country stands for.

"What Owaisi said is pure poison which is bound to inflame communal passions. It is unthinkable that an elected representative of the people should not only harbour such thoughts but should have the temerity to express them in public," Sinha said. 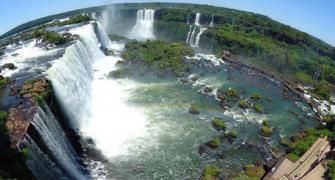 STUNNING PICS: The best cities to travel to in 2013

Complaint against Owaisi for inflammatory speech

Can the Congress re-invent itself again?