Source: PTI
November 22, 2010 19:51 IST
The Samajwadi Party on Monday moved a step closer to bringing Azam Khan back into the party fold a year after he was expelled, with party chief Mulyam Singh Yadav saying that he has accepted Khan's "demands".

"His return into party is final now; he could be with us within a few hours or a few days," Yadav told mediapersons in New Delhi.

The SP chief also offered to nominate Khan as Leader of the Opposition in the Uttar Pradesh legislative assembly. While Khan's expulsion from the SP was revoked recently, it is for the first time that Yadav has openly announced his return into the party fold.

Initially, Yadav had tried to persuade Khan to stop his rebellion but took action against him after the then SP national general secretary Amar Singh threatened to quit over Khan's tirade against him and Jayaprada. Later, Singh and Jayaprada too were expelled in February for "anti-party activities".

Mulayam's announcement came a day after members of the mushwarat council, an outfit comprising Khan's supporters, met him to hand over a letter written by Khan. In his letter, Khan said the past episodes should be forgotten as a "nightmare" and they should strive hard for a "better tomorrow".

Yadav indicated that SP was willing to nominate Khan as Leader of the Opposition in UP legislative assembly. "Shivpal Yadav (the SP chief's younger brother) has already offered to step down in his favour. He did the right thing," Yadav said.

Yadav said the council members had handed over seven suggestions made by Khan. Khan has himself termed the suggestions as his "charter of demands".
Source: PTI© Copyright 2021 PTI. All rights reserved. Republication or redistribution of PTI content, including by framing or similar means, is expressly prohibited without the prior written consent.
Related News: Azam Khan, Mulyam Singh Yadav, Rampur Member of Parliament Jayaprada, Samajwadi Party, Mulayam
SHARE THIS STORY
Print this article
Samajwadi Party MLA booked for attempt to murder 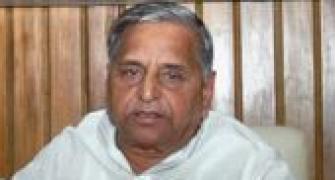