Azad's visit brings no respite to encephalitis-struck east UP

The recent visit by Union Health Minister Ghulam Nabi Azad and Congress general secretary Digvijaya Singh has failed to provide any respite to the poverty-ridden Japanese Encephalitis struck population of Eastern Uttar Pradesh, where the killer disease has killed 507 children over the past four months.

Patients and doctors look even more disillusioned after the visit by these national leaders, whose arrival had brought a lot of hope on the faces of thousands of JE affected people.

"Even though the change in the weather has now reduced the daily inflow of patients to the nodal JE centre at B R Medical College in Gorakhpur from 40 to about 25, the virus is still killing at least two persons every day," Dr K P Kushwaha, the head of the encephalitis programme at the medical college, told rediff.com.

Asked if Azad's visit to Gorakhpur last week brought any help in terms of tackling the deadly virus, pat came the reply with a flat "no".

He said, "While the state government was taking care to equip this hospital with sufficient stock of the desired medicines, the Union health minister simply expressed his inability to do anything about it."

According to him, "the Union minister went about emphasising that since health was a state subject, he was not in a position to extend any special assistance in combating JE in UP."

"The pressure is much less than what it was until about a fortnight ago, but we still have about 248 patients in our wards which have a capacity of 265," he said.

In all, the hospital has received as many as 2730 JE cases over the past four months since the disease broke out.

"Fortunately, the rains are over and even the water-logged areas have dried up to prevent further breeding of the JE virus which usually grows in filth and slush," he added.

"However, what continued to remain a distant cry was a concerted effort to curb the uncontrolled multiplication of pigs who were the main carrier of the virus across each of the eight JE affected districts of Eastern UP," he also said. 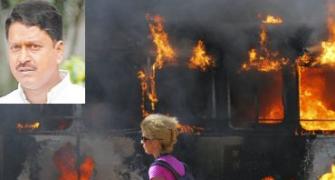