The arrest of top United Liberation Front of Assam leaders and their eagerness for talks raised hopes of a negotiated settlement to the decades-long insurgency problem in Assam, which witnessed a relatively peaceful year.

The year also saw the government and the opposition often locking horns over issues like scams and mega dams.

Most ULFA leaders, who were nabbed in Bangladesh and handed over to Indian authorities, were soon released by the state as they expressed desire to sit for talks.

The Centre and the state government's approach to the issue was also significant. The Centre appointed former IB Chief P C Haldar as interlocutor for talks with northeastern militants who, thereafter held several rounds of discussions with ULFA 'chairman' Arabinda Rajkhowa and other imprisoned leaders of the group in the Guwahati Central Jail, where they are lodged, to take the peace process forward.

The state government, on its part, extended the olive branch to the group by not opposing the bail application of the jailed leaders resulting in the release of its senior-most member and advisor Bhimakanta Buragohain, who is called 'mama' (uncle) by cadres, 'vice chairman' Pradip Gogoi, 'publicity secretary' Mithinga Daimary, 'cultural secretary' Pranati Deka and 'deputy commander-in-chief' Raju Barua.

The release of Rajkhowa and 'foreign secretary' Sasha Choudhury is also in the offing with the government deciding not to oppose their bail applications.

The story of other active militant group of the state -- NDFB's anti-talk faction led by Ranjan Daimary -- was, however, not very encouraging as it continued to indulge in violence.

Daimary was arrested in Bangladesh in May and subsequently handed over to Indian authorities but has so far not expressed willingness to hold talks with the government.

The group continued with its violence in the Bodo-dominated districts of Kokrajhar, Udalguri, Darrang and Sonitpur, killing over 50 people and security forces also stepped up operations against the anti-talk faction resulting in the death of several cadres during the year.

Its 'deputy commander-in-chief' B Jwangkhang was also arrested in Mizoram dealing a severe blow to the group.

The NC Hills Autonomous Council funds diversion scam was in the news with both the ruling Congress and the Opposition AGP and BJP blaming each other for the misappropriation of funds.

The Congress claims that it was BJP-Autonomous State Demand Committee (ASDC) combine, which was in power in the Council, that siphoned off the funds meant for development to the militants while the Opposition parties hold the ruling party responsible for the scam.

Another major development that captured considerable headlines was the issue of mega dams in Assam and Arunachal Pradesh, which threaten to create havoc in the Brahmaputra Valley.

The big dams and their likely impact on the state led activists under the aegis of the Krishak Mukti Sangram Samiti, spearheaded by Akhil Gogoi, to launch a sustained campaign against such projects both in Assam and neighbouring Arunachal Pradesh.

The Opposition parties were quick to jump into the bandwagon making the mega dams and the NC Hills fund diversion scam as major issues for the forthcoming assembly polls in the state scheduled next year.

The ruling Congress, led by Chief Minister Tarun Gogoi, has already started its campaign to capture power for the third consecutive term. AGP and BJP, who are banking on the anti-incumbency factor, have already launched an offensive against the ruling party to wrest power after a decade. 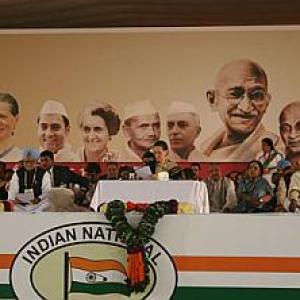