Mohammed Ajmal Amir Kasab, who has been awarded death penalty for his role in the 26/11 terror attacks, is biding his time by practicing karate in the high-security Arthur Road jail, a police source said on Wednesday. "He exercises and practices the martial arts to kill time," he said.

The terrorist appears to know karate well, the official said. The lone surviving gunman is currently lodged in a strong bomb-proof 'anda cell' inside the jail, and a process to shift him to the Yerawada Central Prison in Pune is underway. After reviewing his security at the Arthur Road jail, the police had moved a proposal to the government requesting him be shifted to Yerwada, the biggest prison in the state.

The official added that Kasab talks a lot sometimes. "The security guards avoid him, even though he tries to engage them in conversation," the official added. On February 21, the Bombay high court had upheld the death sentence while dismissing Maharashtra government's appeal, challenging the acquittal of Indian co-conspirators Faheem Ansari and Sabauddin Ahmed in the terror attack case.

Kasab has decided to file an appeal in the Supreme Court, challenging the judgement confirming his sentence, awarded by a anti-terror court earlier. 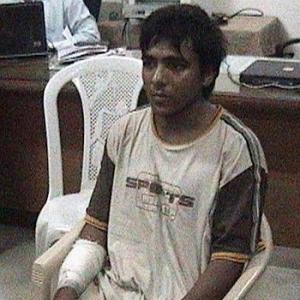 The options before Ajmal Kasab

Why the judge concluded that Ajmal Kasab is guilty