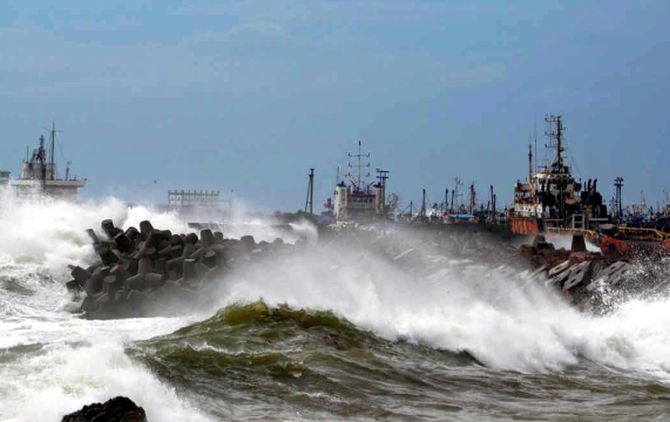 As Cyclone Hudhud is closing in on the Andhra Pradesh coastline and is expected to make a landfall near Visakhapatnam by Sunday afternoon, about 1.11 lakh people in five coastal districts have been shifted to safer places.

The government has made arrangements to evacuate 5,14,725 people in all, officials said, while the army and the navy have kept their personnel on stand-by for rescue and relief operations. 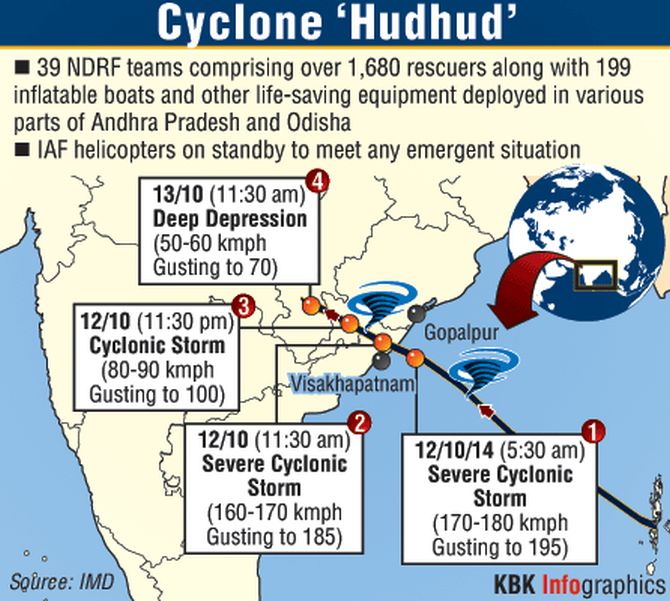 According to the reports received by the state Disaster Management Commissioner A R Sukumar, 35,000 persons have been evacuated in Srikakulam district, 6,000 in Vizianagaram, 15,000 in Visakhapatnam, 50,000 in East Godavari and 5,000 in the West Godavari district.

In all, 436 villages across 64 mandals in the five districts have been identified as exposed to the threat of cyclone. The government has identified 370 relief camps for the evacuated people in these districts.

A senior official of the disaster management department here said 13 National Disaster Response Force teams have been deployed in the districts while the Indian Air Force is moving three helicopters from the Yelahanka air base to Visakhapatnam. 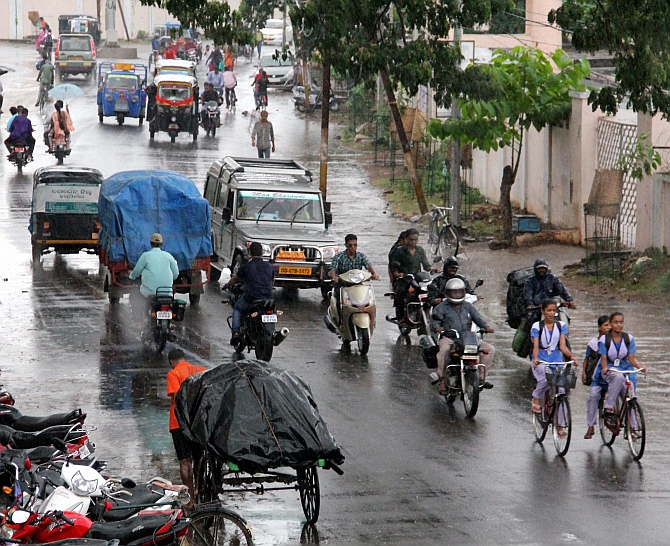 Rains hit Odisha's Berhampur near Gopalpur sea beach on Friday. The cyclone will land near Vishakhapatnam on Sunday. Photograph: PTI

Army personnel have been kept ready in Visakhapatnam, while the eastern naval command has kept four ships on stand-by, equipped with rescue equipment and relief materials.

The meteorological department has warned that extensive damage to kutcha houses, uprooting of big trees and partial disruption of power and communication lines and minor disruption of rail and road traffic are expected.

The storm is now lying within the range of Doppler weather radar at Visakhapatnam, it said in the morning.

Accordingly, the cyclone lay centred at 5.30 am about 330 km southeast of Visakhapatnam in Andhra Pradesh and 380 km south-southeast of Gopalpur in Odisha. 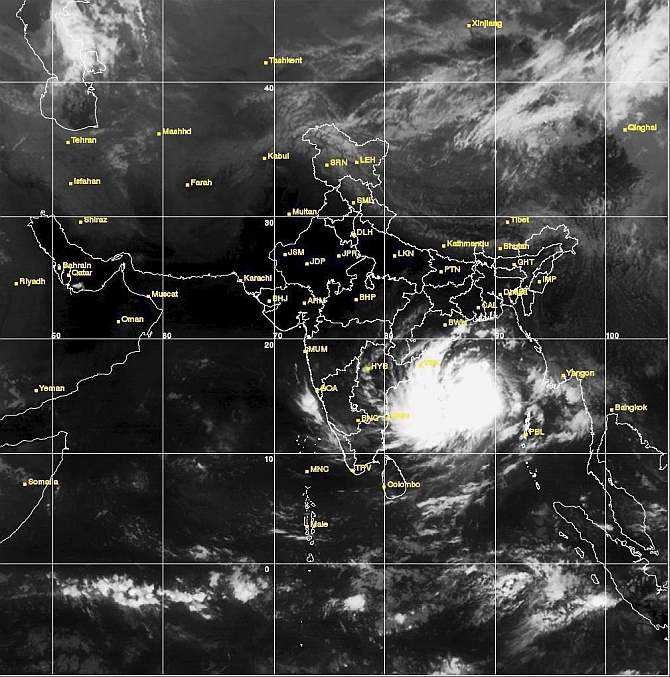 In Odisha too, the state government started evacuating people from vulnerable areas to minimise casualties even as two flights and 39 trains on the route were cancelled. "The collectors of eight districts -- Koraput, Malkangiri, Nabarangpur, Rayagada, Gajapati, Ganjam, Kalahandi and Kandhamal have been on the job to shift people from vulnerable areas to safe places," Special Relief Commissioner P K Mohapatra said.

Rains have been reported from some areas, mostly in the southern region but there was no report of any major damage so far, sources in the SRC said.

Malkangiri, which is likely to the worst hit, is experiencing heavy rainfall and strong winds have been reported from it. One kuchha house at Gudguta village was damaged as a tree fell on it but there was no report of any casualty from anywhere in the district. 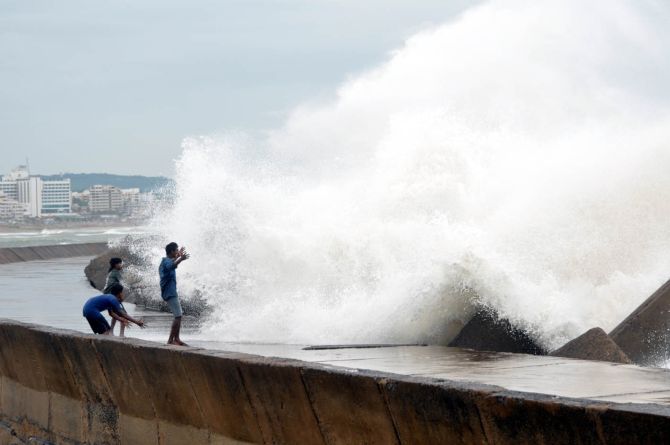 The government has deployed 25 units -- 15 of the NDRF and 10 of the ODRF, each comprising 40 personnel, besides fire service men in vulnerable places in different parts of the state, the SRC said.

As the southern part of the state is likely to be more affected by the cyclonic storm, heavy rainfall and consequent floods, collectors of the eight districts have been asked to carefully assess and evacuate all vulnerable population to safe buildings, Chief Secretary G C Pati said.

As cyclone and flood situations are new for the tribal population in these districts, the administration is facing difficulty convincing the people to shift. "We have engaged public announcement system and local community leaders to ensure that all the people living in kutcha houses are taken to safe places," Pati said.

The SRC said the Malkangiri collector has been asked to ensure that none should remain inside 'kutcha' houses. All the people living in such houses should be evacuated to safe places in keeping with the state's target of zero casualty.

Though the state government is expecting the maximum wind speed in areas adjoining Andhra Pradesh to remain within 100 kmph, it apprehended that heavy rainfall could create problems for the people. "The rainfall could be in the range of 10 cm to 25 cm within a span of only 36 hours from tomorrow afternoon," said Mohapatra, the SRC.

He said besides the eight identified districts, many other places would also receive rainfall from Sunday afternoon till Monday afternoon as per the IMD prediction. Preparations were ready to deal with possible flood in rivers like Rushikulya, Bamsadhara and Nagavali due to heavy rains that would accompany the cyclone.

The chief secretary said the Centre has assured the state government to keep some choppers ready at Kalaikunda air base in West Bengal for air dropping of food packets in the affected areas.

The state has received 14 satellite phones and the Centre has also send eight more NDRF teams as per its request, he said. According to the latest bulletin of IMD, the very severe cyclonic storm is now lying within the range of Doppler weather radar, Visakhapatnam and is being tracked by it since early this morning in addition to satellite and other observational tools.

Heavy to very heavy rainfall would be experienced at one or two places in Khurda, Puri, Jagatsinghpur, Nayagarh, Nuapada, Boudh, Sonepur and Bolangir districts.

The IMD also advised for hoisting local cautionary signal number three (LC-III) at all ports in Odisha. It said the sea would be rough to very rough and squally wind speed reaching 50-60 kmph gusting to 70 kmph from the northeast would prevail along and off Odisha coasts.

The wind speed would increase to 80-90 kmph along and off Odisha coast from Saturday evening it said and suggested suspension of fishing activities. It also advised fishermen not to venture into the sea.

While East Coast Railways has already announced cancellation of 39 trains in view of the cyclone, the authorities of Biju Patnaik airport said the decision to cancel two flights was taken considering the safety of the passengers. "We have cancelled two Indigo flights to Visakhapatanam and are keeping a watch on the situation," Airport Director Sarad Kumar said.

ECoR chief public relations officer J P Mishra said, "We have decided to cancel all trains on the Bhubaneswar and Viskshapatanam route on Sunday." 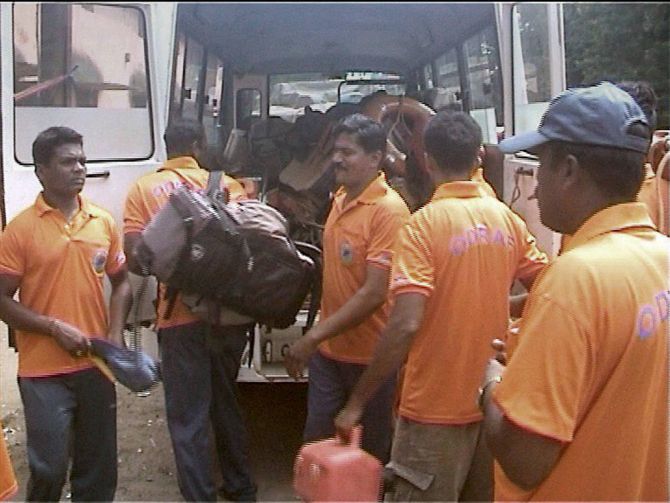 Meanwhile, the National Crisis Management Committee (NCMC) met again today under the Chairmanship of Cabinet Secretary Ajit Seth and reviewed the preparedness for relief and rescue operations in the wake of the cyclonic storm.

An official statement said all the central agencies are fully geared up to provide necessary assistance to the affected states in case of any eventualities arising out of the landfall of the cyclone expected on Sunday. 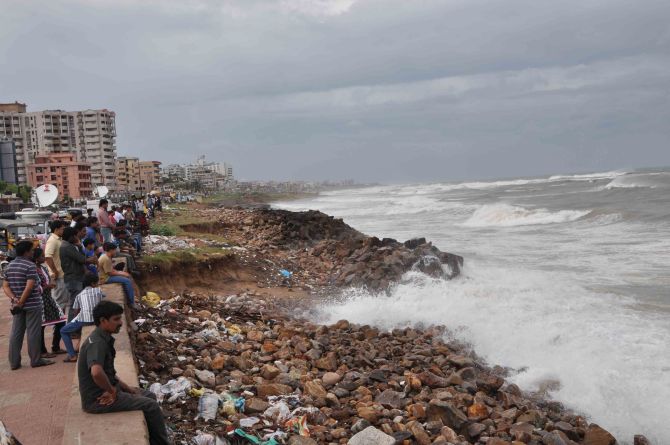 A total of 39 NDRF teams comprising more than 1680 rescuers along with 199 inflatable rubber boats and other life saving equipment have been deployed in various parts of Andhra and Odisha to meet any challenges arising due to the cyclonic storm.

IAF helicopters are also on standby to meet any emergent situation, it said. Lessons from Phailin come in handy for Odisha for tackling Hudhud

Hudhud will take 'very severe' turn in next 12hrs: IMD How WE defeated cyclone Phailin and saved thousands 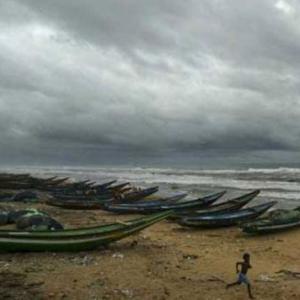 Hudhud roaring in, ready to slam Odisha and Andhra Pradesh 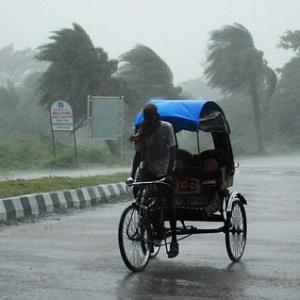