The spat between Bahjan Samaj Party supremo Mayawati and the Samajwadi Party touched a new high on Tuesday, when she declared that she would henceforth refer to SP activists as ‘uncontrolled terrorists’.

Accusing the SP government of taking the law and order situation to an all time low in the state ,she  has also urged the Uttar Pradesh governor to dismiss the Akhilesh government  and clamp President’s Rule in the state.

(Samajwadi Party leaders didn’t like my idea of referring to SP activists as ‘goondas’; therefore, I would not like to cause them any more trouble and instead refer to them from today as ‘uncontrolled  terrorists‘; perhaps they will find these two words more acceptable)

The word war between Mayawati and SP leadership was started on Sunday when the BSP supremo referred to all SP workers as ‘goondas’ and threatened to teach them a lesson of their life.

She was addressing a function to mark the birth anniversary celebrations of Babasaheb Bhimrao Ambedkar in Lucknow.

In a sharp reaction on Monday, SP patriarch Mulayam Singh Yadav’s younger brother and multiple portfolio minister Shivpal Yadav shot back, “I would like to make it loud and clear to Mayawati that if she did not stop referring to Samajwadi Party workers as ‘goondas’, then I would not be able to stop SP workers from calling her ‘goondi’; I would therefore like to advise her to refrain from making such utterances.”

That was followed by Mayawati’s retort on Tuesday. Sure enough, the SP leadership is unlikely to take this lying down. The battle is therefore bound to go on for some more time.

Meanwhile, Mayawati did not mince words in expressing her anger with the Akhilesh government, whom she pointedly blamed for the badly deteriorated law and order in the state. 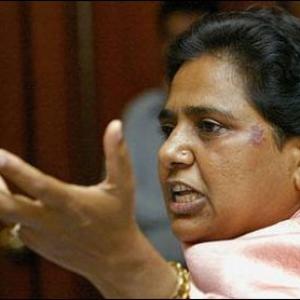 Will teach a lesson to SP 'goons', fumes Mayawati