A bribe can meet any want in Bihar's Beur jail

It is money that matters in a Bihar jail, claims Christopher James Rozario, a prisoner lodged in Patna's Beur jail. Access to liquor, mineral water, cellphone and pornography is possible if an inmate can bribe jail officials and policemen.

Rozario, an undertrial prisoner in a cheating case, has claimed that these corrupt practices go on with the full knowledge of the jail administration. He has mentioned of these practices in his letters to Bihar Chief Minister Nitish Kumar, Deputy General of Police Neelmani and Inspector General (prisons).

Rozario, 57, is not an ordinary prisoner in Beur jail. A doctorate from Cambridge University, United Kingdom, and former teacher of the linguistic department of Kerala University, Rozario has dared to expose corruption behind bars.

He claims that even after getting the release order, a prisoner has to pay between Rs 300 and Rs 500 for getting out on the same day. Those who fail to pay the bribe have to wait for another day.

In his letter to the state administration, Rozario said that there are price tags for an accused to be produced before a court outside Patna and signing a vakalatnama. It is a reality as he was forced to pay money after he was transferred from Delhi's Tihar jail to Beur jail a few months ago.

He also alleged malpractices in the jail hospital. Five life convicts are trained to give false witness accounts in cases of death inquiry. Rozario has said that even the magistrate visiting the jail holds an inquiry in the superintendent's chamber instead of visiting the place of occurrence and interacting with inmates.

If an inmate needs money, all he needs is a visitor, who needs to get in touch with the mulakat writer (a jail official). The rest is all innovative. A long piece of wire is pulled which connects the visitor and the inmate. The visitor wraps the currency on one side of the wire and it is pulled in by the inmate. All this is possible in Beur jail if an inmate is able to bribe jail officials, Rozario mentions in his letter.

Interestingly, Beur jail Superintendent O P Gupta told rediff.com on Monday that he does not remember of any such letter being sent to top officials highlighting corrupt practices in the jail. "Rozario's letter may be his account but far from truth. No such thing happens in the jail," Gupta said.

However, it was only last week during raids in a jail that Patna Superintendent of Police S W Lande found high profile inmates including notorious gangsters and criminal turned politicians enjoying a lavish lifestyle, all thanks to the jail administration.

It is well-known that Rajesh Ranjan alias Pappu Yadav, convicted and sentenced to life imprisonment for the murder of a Communist Party of India (Marxist) member of legislative assembly, Ajit Sarkar, till recently was receiving special treatment in jail.

According to the police, Yadav is lodged in a 14x40 feet 'luxury' room equipped with three ceiling fans, three table fans, a big colour TV, chairs, dining tables and a special kitchen. However, following last week's inspection of the jail, 'Pappu Yadav is now treated as a regular prisoner,' a jail official said. The inspection took place after intelligence reports that some crime syndicates were operating from behind bars.

Similarly, gangster Bindu Singh and former president of the All India Bank Association J N Singh and some Maoist leaders lodged in Beur jail were found enjoying a lavish lifestyle till a few days ago.

Shankar, known for his hard-hitting actions to check and control crime and corruption, had asked policemen not to give special treatment to criminals. "I don't want any special treatment to be given to criminals. Simply put them behind the bars without wasting time after their arrest," he said. Shankar was informed that criminals in custody were provided mineral water supplied by on duty policemen.

In Bihar, it is common for criminals to be found enjoying a good life in custody. In the past, raids in the state's jails have led to the seizure of colour TVs, mobile phones, imported liquor and cigarettes.

A few years ago, former legislator Rajan Tiwari, who is facing several criminal charges including murder, kidnapping and extortion, reportedly visited a massage parlour outside the high-security Beur jail where he was an undertrial. 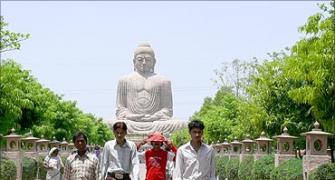 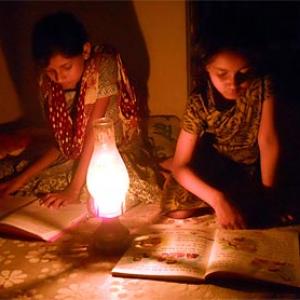 Still in the lantern age: Bihar