The Congress president says he was the first one to visit former PM Atal Bihari Vajpayee at the hospital. 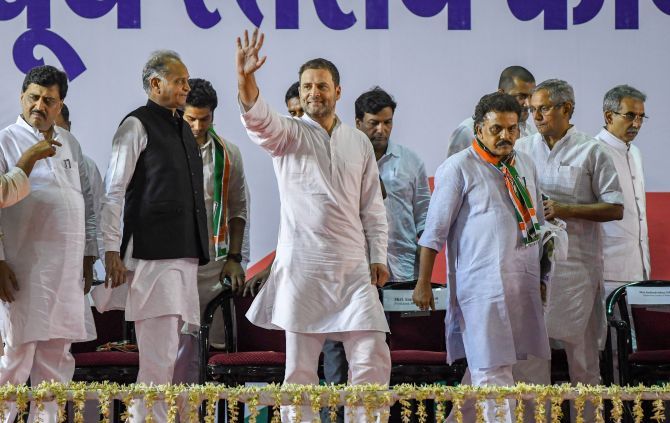 IMAGE: Congress president Rahul Gandhi waves as he arrives to attend a meeting with his party workers in Mumbai on Tuesday. Photograph: Shirish Shete/PTI Photo

Congress president Rahul Gandhi on Tuesday accused Prime Minister Narendra Modi of insulting his 'mentor' L K Advani despite Hinduism teaching how a 'guru' was the most important person in an individual's life.

Addressing a rally of party workers in Mumbai, Gandhi said Modi did not treat his guru (Advani) with respect even at official functions.

"Everybody knows who is the guru and mentor of Modi -- L K Advani. But the Prime Minister doesn't accord respect to him even at official functions. It is me who follows protocol and I am always with him (Advani) during (such) events," he said.

"Today I feel very sad for Advani ji. The Congress party has given him more respect than Modi ji has," he said.

The Congress president said his party fought and defeated Advani in 2004 and 2009 parliamentary elections.

"Now it is the Congress and our party's ideology which give respect to Advani," Gandhi said.

Gandhi said he was the first to pay a visit to former prime minister Atal Bihari Vajpayee after his hospitalisation on Monday.

"Even when Vajpayee is ill in hospital, I was the first one to visit him, since the Congress believes he has contributed to the country," he said.

However, the Bharatiya Janata Party accused Gandhi of practising the 'lowest form of politics' and said it was bizarre to see the president of the country's oldest party stoop to such a low.

BJP spokesperson Anil Baluni claimed that it was clear that the Congress president has no link with Indian values as he keeps violating political and social norms.

Hitting back at Gandhi, Baluni referred to Congress leaders' criticism of former president Pranab Mukherjee for attending a Rashtriya Swayamsevak Sangh event, and said the country had seen how the party treated one of its veterans.

Congress leaders had torn to pieces clothes of its then president Sitaram Kesari and thrown him out of his office, Baluni said as he cited alleged mistreatment of former prime minister P V Narasimha Rao by his party to make his point. Rahul Gandhi should not lecture us political values, he said.

"The Congress president is practising the lowest form of politics. He is violating our social and political norms. He does not even seem to know the kind of politics he is doing. The country is watching how the president of the oldest political party is behaving," Baluni said.

Addressing a convention of Mumbai booth-level Congress workers on Tuesday, Gandhi accused the Modi government of creating hatred and division in the society and betraying farmers as well as youth in the country.

He also alleged that Modi was a 'chowkidar' only for a handful of industrialists and not the common man. He said that the prime minister feels that he can run the country only with his speeches.

"But now, if you observe him closely, there is fear in his voice. There is even more fear in Jay Shah's father (Amit Shah)... and that is why he is going here and there," he said in an apparent dig at the saffron party's 'contact for support' campaign.

Gandhi expressed confidence that the Congress and the rest of the opposition parties will defeat the BJP in the 2019 Lok Sabha polls.

"In the last four years, the Modi government has created hatred and division in the society. Farmers and youth have been betrayed," he said.

"But the youth will have to be given jobs and farmers' interests need to be protected. The prime minister asks what the Congress has done during it rule... Congress didn't threaten and crush anybody. The party did not divide people over caste, religion and colour.

"Congress just saw if the individual was an Indian and it stood by him. Congress united the country," he said.

Gandhi said the BJP scraped through the Gujarat assembly polls and suffered a defeat in the Karnataka elections.

"Now, the party will not be seen after the assembly elections in Chhattisgarh, Rajasthan and Madhya Pradesh. The Opposition led by Congress will defeat the BJP in the 2019 Lok Sabha polls," he claimed.

He said a senior opposition leader recently told him that only the Congress could protect the unity and diversity of India.

"The senior leader told me that he had spent 50 years of his political life fighting against the Congress. But now he has realised that in the battle of ideologies, only the Congress could defeat the BJP and the RSS ideology," he said.

When the voices in the audience asked if the leader was L K Advani, Gandhi said, "No it's not Advani."

He said the country had suffered due to the policies of the BJP in the last four years.

Describing the booth workers as 'senapatis' (generals) of the party, he said at the convention that he will ensure that their respect and interests are protected.

"Ask anybody if candidates for Gujarat polls were parachuted from elsewhere. Ask Karnataka Congressmen whether or not their views were considered during the selection of candidates. The party belongs to you and it is your responsibility to protect and propagate the party ideology," he said.

Gandhi also asked the workers to talk to people about promises of Rs 15 lakh in bank accounts, 2 crore jobs annually and good price for farm produce and how the Modi government's decisions like demonetisation, GST rollout had hurt them.

"Talk to people about Doklam, Rafael deal, scams of Piyush Goyal, Jay Shah," he said adding that the Mission Shakti programme is aimed at empowering the party worker and is working well in Rajasthan.

Taking a dig at the media, he said, "Write sometimes about Rafale deal, Doklam. I know you and your higherups are under pressure. When the United Progressive Alliance was in power, you wrote about us openly and criticised us fearlessly."

Gandhi said he plans to create a wall in the new party headquarters in Delhi with the names of matryrs, who laid down their lives for the country, written on it.

"When Savarkar was writing mercy petitions to the British, Congress men and women were serving jail terms," he said.

Gandhi began his 30-minutes long speech with a couple of sentences in Marathi: Majha sarvanna namaskar. Apan sagle kase aahat. (My greetings to you. How are you all?)

Earlier on Tuesday, the Congress chief appeared before a court in Bhiwandi town in neighbouring Thane district in connection with a defamation case filed against him by an RSS worker.

Talking to reporters outside the court, he took a swipe at Modi's radio programme 'Mann ki Baat' and said the prime minister does not speak about 'kaam ki baat' like providing employment to youth or safeguarding farmers.

"Let them (the BJP and the RSS) slap as many cases as they want against me. Ours is a fight of ideology. We will fight them and win," Gandhi said.

On May 2, the court in Bhiwandi had asked Gandhi to appear before it on Tuesday to record his plea in the defamation case filed by RSS worker Rajesh Kunte in 2014.

Kunte had filed the case after watching Gandhi's speech at an election rally in which he had claimed that the RSS was behind the killing of Mahatma Gandhi.