News
Business
Movies
Sports
Cricket
Get Ahead
Money Tips
Shopping
Sign in  |  Create a Rediffmail account
Rediff.com  » News » Want to save water? Give it a price

'In India, we are paying a price for not managing water as we are not willing to pay the cost for it.' 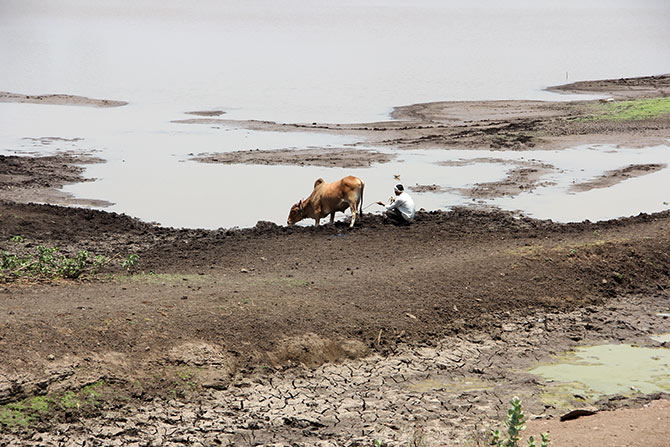 If there is one subject closet to Mridula Ramesh's heart, it is climate solutions.

This is exactly what her book -- The Climate Solution: India’s Climate Change Crisis And What We Can Do About It -- is all about.

Ramesh, founder of the Sundaram Climate Institute, is an active angel investor in over a dozen start-ups working in the field of climate and environment.

A graduate with distinction from New York's Cornell University and an MBA from the Kellogg School of Management, she worked at McKinsey in Silicon Valley before returning to India.

Ramesh now teaches a postgraduate class on climate change at the Great Lakes Institute of Management in Tamil Nadu.

The Chennai floods and the water scarcity in Madurai where you live inspired you to write this book. Did the havoc caused by climate change across the world and the US stepping out of the Paris climate change agreement also affect you in the same manner?

You are asking me whether the book happened because of global altruism. No, I started working on the book before the US walked out of the Paris agreement.

I have always believed that, for each of us to act in any way, the problem had to affect us personally. That is why I have added a chapter on human psychology.

It is very important for us to understand how a problem affects us personally, without which we are not going to act.

In my case, a combination of factors lead to the writing the book.

We ran out of water at home when I just had my baby. The condition made me ask, 'What is going on? What can we do about it?'

I started my work on the book with these two questions. 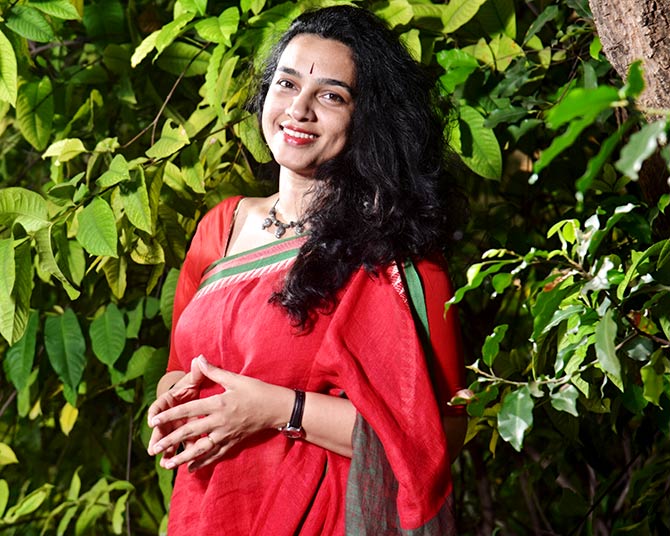 IMAGE: 'If you keep stressing the system, it will try to accommodate the change only up to a point. After that, it will break,' says Mridula Ramesh. Photograph: Kind courtesy Mridula Ramesh

You said we do not act unless we are personally affected. Do you feel human beings, in general, are taking nature for granted?

Absolutely. Now, nature is talking back to us.

I read a very good quote somewhere, that we are negotiating with physics but physics doesn't negotiate with us.

If you keep stressing the system, it will try to accommodate the change only up to a point. After that, it will break.

There are several everyday examples to it.

That is why I said let's put a price on it. I have found that we only value things we pay for.

I know there is a whole section of people who will ask, how can you put a price on water when you have so many poor in our country? It is a bogus argument.

We have just finished a survey in Madurai on waste and water realities and we have found that it was the poor who ended up paying a higher price.

Let us not hide behind the poor as they are the people who are affected badly. For example, the infections they get because of the poor quality of water.

Also, the technology available today allows us to refund the poor. 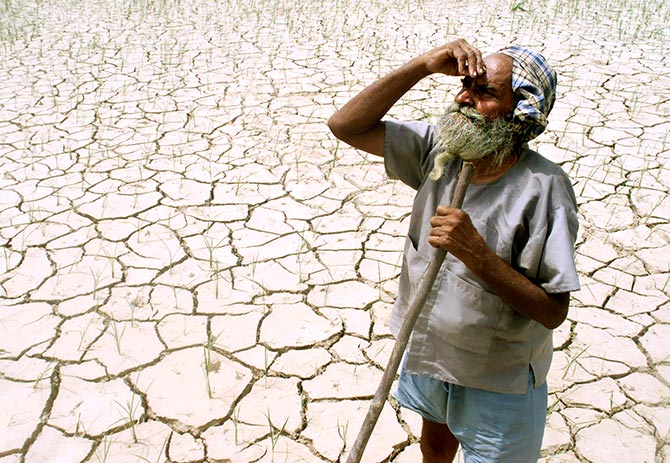 IMAGE: An Indian farmer, standing in his drought-destroyed field, scans the skies for the monsoon clouds. Photograph: Dipak Kumar/Reuters

The NITI Aayog report said 600 million Indians faced high to extreme water scarcity and about 200,000 people died every year due to inadequate access to water.

I think the NITI Aayog report has been very candid about admitting the uncertainties in getting the data.

When you put such a large number, there are estimates and assumptions that go into it.

I have gone through the report and they have been quite explicit about the assumptions.

You mean it is not correct?

I think it is an underestimate! Most people will agree on that.

Rajendra Singh, the water man of India, and I were together the day the report came out and both of us felt the numbers were an underestimate.

The NITI Aayog report is wonderful because we need strong reports like this to highlight the problem.

We need to understand that what we face is a real problem. But the fact is, even if people are scared, they forget about it two weeks later.

I wrote in my book that the silver lining about climate change -- that is, if you want to call it a silver lining -- is that you start getting hit very, very often.

When I started writing about it in 2015, most people said I was crazy. They described it as a midlife crisis that had gone badly wrong!

Three years later, the things I said are coming true.

I still maintain that the numbers the NITI Aayog report talks about is an underestimate.

It talks about how two lakh people die every year due to water scarcity which also is an underestimate. The numbers are probably higher than that.

I quote a WHO report in my book which says that 300,000 children die every year because of diarrhoea. Eighty-eight per cent of diarrhoea cases take place because of the poor quality of water and poor sanitation. 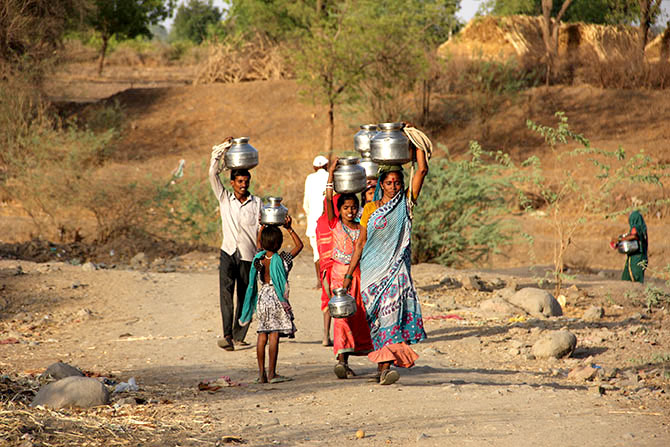 The other day, I interviewed S P Ravi who is in charge of the River Research Centre in Chalakudy (Kerala). He said we looked at water as an economic resource and not as a life resource and this was one of the reasons why water was becoming scarce. Do you agree?

Let me ask a question.

If you look at water as a life resource, will the attitudes we have today, and the institutions we have in society today, take care of the water problem?

Whereas if we treat water as an economic resource, which is priced, will the attitudes we have today and the institutions we have in society do a better job?

Given the reality of India and world today, will we manage water better if it is looked at as an economic resource or as a life resource?

One of the major problems we have is the way water is managed.

This issue became quite important to me after I ran out of water at home.

Four years down the line, when Madurai had its worst drought, we were the only house that didn't buy water.

We didn't do magic; we learnt how to manage water.

In our factory too, we manage our water and we have an internal price for it.

In India, we are paying a price for not managing water as we are not willing to pay the cost for it. And the cost will be much lesser than the price.

Who bears the cost and who is bearing the price?

We need an economic price to manage water.

So, if I have to focus on one thing, it would be water. And of course, waste too.

Poorly managed waste is one of the reasons why Indian cities flood more than they should.

I will focus on energy efficiency at the end only.

Water and waste can generate jobs too.

I have invested in two waste management companies and they create jobs. So, it need not be jobs or the environment; it can be jobs and the environment.

I invest only in start-ups that are in the realm of waste and water. 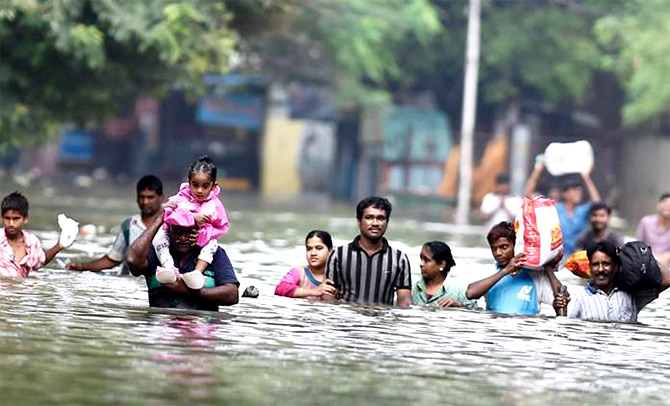 Climate change is a global phenomenon. Can any country work in isolation?

When the world is broken up by narrow domestic walls, and the world is as it is, is it not a realistic expectation to work in isolation?

That is the whole point of my writing the book and what we can do about climate change.

The work begins in the neighbourhood.

Like your house didn't have a water problem when all of Madurai had to buy water?

The way Rajendra Singh worked was that neighbours made sure that their neighbours did not grow bad crops. Resilience is always local.

The problem in India is that there are differences from street to street and state to state. So, when you come up with solutions, it has to be different for different areas.

What is needed is devolution of power to the local bodies, but that has not happened yet.

If you can get accountability and money at the local level, you will see some kind of resilience happening. 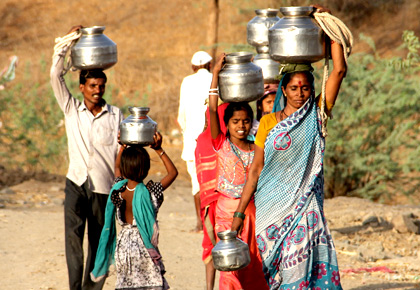 Get Rediff News delivered into your Inbox.
Shobha Warrier / Rediff.com
SHARE THIS STORY
Print this article