'The only reason why these troubling developments are taking place is because of a certain arrogance of power displayed by this government that hopes to clamp down on those voices which have repeatedly pointed out that their bloated rhetoric and grandstanding are not matched by their insipid and tepid response in matters of governance.' 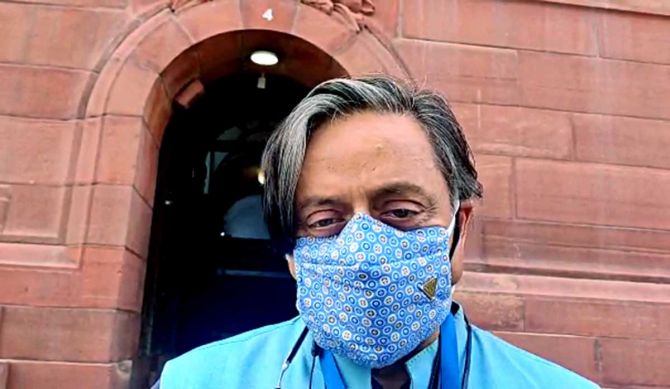 On January 30, FIRs were filed against parliamentarian Shashi Tharoor and journalists Rajdeep Sardesai, Mrinal Pande, Zafar Agha, Paresh Nath, Anant Nath, and Vinod K Jose over their 'misleading' tweets on the violence that happened during the farmers' tractor rally in Delhi on Republic Day.

On February 9, the Supreme Court stayed their arrest in the case.

On February 13, Disha Ravi, a 21-year-old climate change activist, was arrested over her alleged involvement with an online 'toolkit' related to Greta Thunberg and the farmers' agitation.

Three days later, two more activists, Nikita Jacob and Shantanu Muluk, were added to the wanted list by the Delhi police in the case involving the toolkit shared by Greta Thunberg in support of the farmers' protests.

Dr Shashi Tharoor, the Congress member of Parliament from Thiruvananthapuram, discusses these shocking developments, in the first of a two-part interview with Shobha Warrier/Rediff.com.

Voices of the protesting farmers are muzzled, anyone who supports them is silenced, young activists are being arrested...
Are you worried about the kind of force unleashed against dissenting voices in the country?

Of course, I am troubled by these developments and saddened that my country is walking down this dark path.

I am also concerned that these incidents once again illustrate this government's stark immaturity when it comes to leading the nation.

At a time when we are facing several challenges -- an economy that has hit the doldrums on account of the pandemic and accelerated by this government's ineptitude, the threat of Chinese incursions on our sovereign territories, the persisting effects of the COVID-19 virus and a lacklustre rollout of our vaccination programme and the widespread agrarian distress -- that our government has chosen to direct its attention and energies to muzzling free speech, fundamental rights and individual liberties in the name of a purported national interest is unbecoming of our rich democratic ethos and a betrayal of the hopes and aspiration of our citizens who expected comprehensive solutions to these serious problems.

Don't you think a weak Opposition is one of the reasons why all this is happening?

I don't think that is fair.

The Opposition has certainly been at the forefront in highlighting the assortment of serious challenges that the country is facing -- whether it is highlighting the genuine concerns of our farmers, or arguing for greater support towards our armed forces so that they are better equipped to handle Chinese aggression on our borders or even articulating a more fundamental need to preserve the freedom of individual liberties and rights that are the cornerstone of any democratic nation.

To blame the Opposition for what is taking place in our country is a simplistic and convenient approach that does not take into account the actual track record and performance of all of us who have demanded greater governmental accountability.

As far as I am concerned, the only reason why these troubling developments are taking place is because of a certain arrogance of power displayed by this government that hopes to clamp down on those voices which have repeatedly pointed out that their bloated rhetoric and grandstanding are not matched by their insipid and tepid response in matters of governance.

Why do you think the government slaps sedition charges on anyone -- from political leaders like you to young activists and journalists -- who criticises its policies?

These attempts stem from a pronounced insecurity and authoritarianism that drives many of this government's actions.

At the same time, this government's dramatic responses to tweets by a pop star, a climate change activist and the recent incident of putting a 21 year old in jail has resulted in an implosion of India's image globally, in a manner that has no similar precedent.

India was a country admired across the world for the manner in which it celebrated its diversity (including of political ideology and opinion), that protected the fundamental rights of our citizens and managed to govern a chaotic and vibrant democracy through consensus rather than conformity.

That is no longer the case in BJP-ruled India which has presented itself as a country headed by a government that is, paradoxically, not just authoritarian but characterised by a meek and fragile mindset.

We should not be surprised.

After all, this government traces its political lineage to a group that not just stood by while our colonial overlords clamped down on the leaders of the freedom movement in a similar manner but actively aided and benefitted from the British suppression of people who wanted a free and independent India.

The tradition that started with the Hindu Mahasabha continues today with the BJP government. 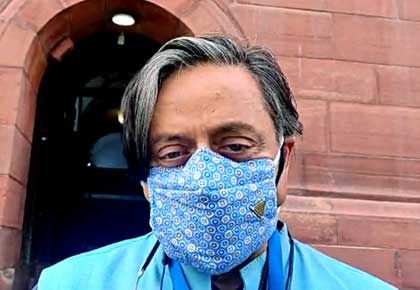