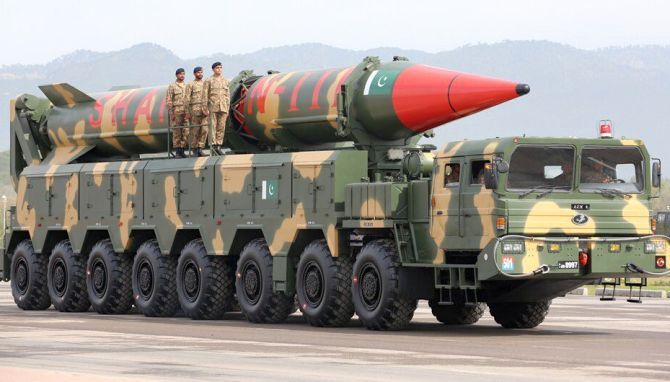 Pakistan's nuclear arsenal is growing at a faster rate than predicted, with a reliable report from the non-profit Federation of American Scientists putting the figure at about 150 warheads now.

In the FAS's Nuclear Notebook: Pakistani Nuclear Forces, 2018, the authors, Hans Kristensen and Robert Norris, suggest that this could mean the country is not only on target to have up to 250 warheads by 2025, but that its production of tactical nuclear weapons risked a quicker slide from conventional clashes to a nuclear war.

The report was put together using requests under the United States Freedom of Information Act and declassified documents. Dr Kristensen cautioned that the estimates came with considerable uncertainty, given that all the nuclear nations shrouded their programmes in secrecy. 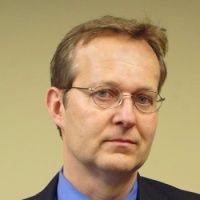 Dr Kristensen, director, FAS Nuclear Information Project, has a resume steeped in analytical research including, early in his career, a long stint at Greenpeace, the environmental non-profit that, among other issues, also argues against reliance on nuclear power, saying it is ridden with problems and could also help spawn new nuclear powers.

"Once one side starts using nuclear weapons, all bets are off," Dr Hans Kristensen tells Rediff.com's senior US contributor P Rajendran.

You are reputed to provide the best publicly available information on nuclear arms worldwide. How do you go about analysing the information?

First of all, the fact that we are called the best estimates reflects that there are no official estimates -- the point being that none of those countries release any information about how many nuclear weapons they have. So it is up to others to make those estimates.

What we have done over the years is to develop a methodology by which we combine information from declassified documents here in the United States and elsewhere and combine that with other information about the country's military postures, specifically what kind of weapons systems they have, what kind of strategy they have, and also how much fissile material they are thought to have available for their nuclear weapons programme.

We try to combine all of these related information into estimates that obviously come with considerable uncertainty because we don't know the specifics of the country's nuclear weapons numbers.

You are also looking at the political situation in those countries, right?

Nuclear forces develop slowly and so the political climate can change and, of course, it can have an effect on weapons programmes.

But over the years nuclear weapons programmes tend to follow longer-term plans rather than quickly change depending on the mood between countries.

So if a country plans to have nuclear weapons soon, such as in the case of Saddam Hussein, president and dictator of Iraq for about 23 years, it cannot develop one easily.

Yeah, there's a long period of design development that all countries must go through.

India and Pakistan went through that in the seventies, eighties and nineties before they got to the point of even detonating nuclear weapons.

Given the chaotic nature of the nuclear standoff in South Asia, and the fact that there are actually three actors present -- India, China and Pakistan -- can Pakistan's increased nuclear weaponry escalate the arms race there?

Yes, specially India and Pakistan will look closely at each other's nuclear postures and obviously follow what the other side is doing. That can have real impact on what they decide to do.

If you look at the Pakistani and Indian arsenals they were, for the first couple of decades, they were relatively closely linked in terms of what categories of weapons they developed.

But within the last decade we have seen some change, for example, in the case of Pakistan, putting more emphasis on what appears to be more tactical nuclear weapons.

They have their reasons for doing that, and India seems to be putting more emphasis on longer-range systems because of the way it is planning vis-a-vis China.

So Pakistan is planning for trouble with India, while India is planning in the longer term for China?

The Bharatiya Janata Party was the party in power when the first nuclear tests were conducted in 1998 (after India exploded an atom bomb in 1974) even though, as you suggested, all the material must have been ready for some time.
Did the perception that India's current BJP-led government is more combative have helped change Pakistan's posture?

The main reason Pakistan has put more emphasis on tactical nuclear weapons appears to be their concern about what to do about India's larger conventional forces.

(If) those forces invaded Pakistan would they be able to go in and basically win without India ever having to cross the nuclear threshold.

The Pakistani planners concluded that they needed to have tactical nuclear weapons to stop such an invasion without having to resort to strategic nuclear attacks against India.

Do you think any low-level nuclear use could lead to a larger nuclear war?

Yes, that's always the danger, of course, not just in the case of India and Pakistan, but in all Nuclear Weapons States.

Once the military starts to draw up plans for using nuclear weapons in what you could call the pre-strategic environment, then you get two situations.

One, of course, is that nuclear weapons could be used earlier in a crisis than otherwise.

Once you start using nuclear weapons on one side it is very unlikely that the other side will just be sitting there, saying, 'Oh, I guess we shouldn't do that.' They will take measures, of course.

If India has decided that it is necessary to invade Pakistan for whatever reason and its forces are being annihilated inside Pakistan because of the Pakistani use of tactical nuclear weapons, it is very hard to imagine the Indians would say, 'I guess we were wrong, we're just going to pull back here.'

So once one side starts using nuclear weapons, all bets are off.

India does have a policy of no first use of nuclear weapons, but if there is this reason, could it go all the way?

When countries have no first use policies, these are policies that play more of a role in peacetime.

I have a hard time imagining that a country in a war where significant national interests were threatened, that it would say, 'Oh, gee, we should not use it first because we have a no first use policy.'

Once you get into that situation, countries will do pretty much what they think is necessary. I see the value and the message of no first use policies more as something that's important in peacetime.

The new government in Pakistan led by Imran Khan is believed to be working with or controlled by the military. Could that at least in the short term reduce the chance of a conflict with India?

We don't really know what the new Pakistani government believes about these issues. It is in any case very unlikely to fundamentally change the role of Pakistan's nuclear weapons. So we'll have to wait and see.

China is a bigger threat to India than Pakistan even if it is less likely to act precipitately.
When you wrote about Chinese nuclear weapons you addressed it essentially from the viewpoint of America.
China has had military standoffs with India. Could any of them move into the nuclear realm?

Oh yeah. All conventional conflicts, of course, can escalate into nuclear use -- potentially.

So, of course, given that India and China has had several serious border incidents over the years, that could, of course, happen again.

And if it does, it is possible that you could get to a potential role for nuclear weapons if the conventional phase of the crisis escalated to very serious levels.

My guess is that you would have to see more than just a border skirmish for that to happen.

It would have be something that escalates to strategic attacks with conventional forces against cities or military bases of something like that for it to trigger that kind of (nuclear conflict).

You have said the capabilities of China's nuclear modernisation programme could influence its nuclear policy.

What kind of changes do you expect to see?

They can begin to contemplate more limited strikes, more precise strikes, with less explosive yield into something that begins to look like a counterforce attack.

I have to caution that just because a country attacks a military base with a nuclear weapon doesn't mean they have a counterforce strategy, which is a much more ambitious strategy.

But if you look at the Chinese arsenal, they are mixing conventional and nuclear ballistic missiles in a way that seems to indicate that they would use force that could very quickly be misunderstood to be nuclear attacks.

There's no way in a confusing conflict to distinguish whether the launch of a Chinese DF21 is a conventional or nuclear weapons -- until it detonates, of course.*

You could easily imagine some serious misunderstandings in such a crisis.

Of course, it is for the Chinese leadership that has to decide what policy and strategy they have.

Chinese military planners get better weapons and can offer different scenarios to the political leadership.

Then it is possible down the line that we can see a slight adjustment in the way the Chinese think about using nuclear weapons.

More flexible options, maybe even some limited scenarios in which they would use nuclear weapons, not just in the final retaliatory strike, but in ways to try to influence the military conflict.

But we'll have to see what happens. We are still in the early phases.

Dr James Hansen, in a feisty interview with me some years ago, argued for some reliance on many small nuclear plants, if only to offset the damage done by climate-changing fossil fuels.
If other South Asians nations -- such as Bangladesh or Sri Lanka -- take up such options would there be a possibility of more nuclear states emerging in the region?

Potentially, yes, because not only is that the way you get nuclear material (for weapons) but that is also the way you train technicians to be able to handle these technologies.

All Nuclear Weapons States have evolved their nuclear capabilities from programmes that were originally mainly peaceful, of course the United States being different because it specifically started the project to go after the bomb. Other countries have done it the other way.

Having said that, the danger of arguing that nuclear power is needed to reduce climate effects from coal power is, of course, a very simplistic line of argument because it only looks at one particular effect. There are other effects of nuclear power as well one has to take into consideration.

There is the problem of nuclear waste, for example, that remains radioactive for years...

That's a big problem, and it's a real reason, for example here in the United States, for why nuclear power today is less and less attractive.

It's a very expensive form of energy production and they still, after all these years, have not resolved the issue of what to do with the waste.

* The Dong-Feng 21 is a single-warhead medium-range ballstic missile that can carry either nuclear or conventional armaments and which can go as far as 1,700 kilometres.