'Here is a woman who has got widespread appreciation for her work.'
'Social media was full of posts wanting her as the chief ministerial candidate.'
'This kind of popularity did not go well within the party.'
'See, today the party is Pinarayi Vijayan!' 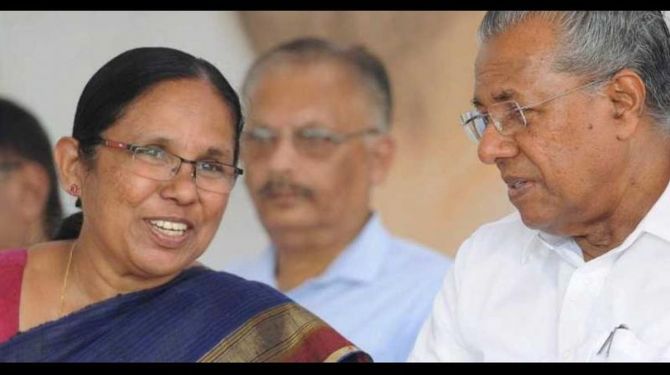 If the Pinarayi Vijayan-led Left Democratic Front's re-election in Kerala was not a surprise, his choice of ministers has shocked Malayalees and others outside the state.

His decision to drop his ministry's star performer K K Shailaja -- popularly known as Shailaja Teacher -- from the new ministry has led to many theories -- ranging from male ego to patriarchy in Kerala's society.

As health minister, Shailaja's work was noticed and appreciated not only within India but internationally too.

Then, why was she dropped?

B R P Bhaskar, who started working as a journalist in 1952 with The Hindu, has been a keen observer of Kerala's political history,

She was the most popular minister in the Pinarayi cabinet. She was applauded nationally and internationally for the way she handled the pandemic. Now, she has no place in the cabinet.
Was it surprising that K K Shailaja was dropped by Pinarayi Vijayan?

Shailaja performed very well during the pandemic as the health minister of Kerala.

When the United Nations agency was holding an international seminar, she was invited and her presentation at the seminar was much appreciated by all.

She was on the cover of some international magazine also....

I think, all this international attention was not appreciated by the party establishment.

Can I say, it bruised the male ego?

I am coming to that. My theory is that the message the party is sending is, they don't want another Gowri Amma!

So, it is history repeating itself....

Of course, it is history repeating itself. Shailaja is the second Gowri Amma. I also see this as patriarchy asserting itself.

Last year itself, we saw Pinarayi stepping in and holding the daily press conferences.

That was after she started getting worldwide accolades. When he took over, it was a public relations exercise.

The next signal was, when experienced people were asked to step down and not to contest in the elections, there were reports that she might not contest.

Then, her seat which she had won with a good majority was given away to one of the constituents of the LDF.

And she was shifted to a new constituency

Which she won with a record margin, the highest in the history of Kerala....

Yes. Here is a woman who has got widespread appreciation for her work. In fact, social media was full of posts wanting her as the chief ministerial candidate.

This kind of popularity did not go well within the party. 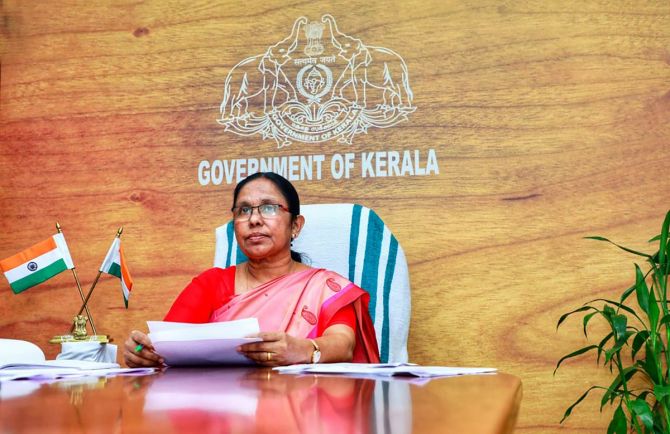 By party, do you mean Pinarayi Vijayan or seniors in the party (the Communist Party of India-Marxist)?

The CPI-M has not produced many strong women leaders except perhaps a Gowri Amma. Why?

During the pre-Independence period and also in the fifties, there were powerful women like Koothattukulam Mary, Rosamma Punnoose, Akamma Cherian, Annie Maskrin, etc in public life.

If you look at the history of Kerala, you will see that Gowri Amma rose at a time when the status of women was rising in Kerala.

When she was trampled upon, it coincides with the denigration of women in Kerala.

The slogan they used was 'K R Gowri would rule Kerala'.

Her name was used and the party projected her as the next chief minister, but after the elections,she was bypassed and E K Nayanar was brought in.

It was EMS (Namboodiripad), the most powerful man in the party who didn't want K R Gowri to be the chief minister.

He was the one who brought in Nayanar. But the rank and file in the party wanted Gowri Amma then.

At the same time, the LDF partners preferred T K Ramakrishnan. Why? Because they knew that they would not be able to handle Gowri Amma.

She was also one minister who commanded a lot of respect in the bureaucracy.

One bureaucrat who worked with her once told me, 'It was very easy to work with her because she would say what the government's policy was and what should be done in clear terms. There was no ambiguity in the policies.'

She had no agenda other than doing work.

Another incident I can narrate is, the LDF and the UDF (United Democratic Front) together passed the Adivasi Law for the restoration of the land to the Adivasis.

Later, both fronts came together decided to scrap the old law and come up with a new law to give them alternative lands.

This was done to appease some of their partners.

When the new law was put to vote in the assembly, Gowri Amma was the only person who opposed it! When K K Shailaja rose in prominence because of her efficient way of functioning, were you reminded of Gowri Amma?

Gowri Amma was a prominent figure in the Communist party for a long time, but we came to know about Shailaja only after she became a minister in the last ministry.

One thing I can say, Shailaja conducted herself with grace and maturity. She also showed tremendous understanding of the issues.

But we saw the party trying to deny her a ticket first. When they could not stop her from winning, they are stopping her now.

Won't this backfire as she has tremendous goodwill in the state and she won with a record margin?

The next election is five years away! Another thing is, elections are not won on issues.

But this is a very sad end to an efficient woman as I connect this to the status of women in Kerala.

A woman who got more attention than the male ministers has been trampled upon. They don't want another Gowri Amma!

But this is not going to create any problem unlike what happened after pushing Gowri Amma out of the party as she was such a respected, popular, well known and influential leader.

This is an issue the party can handle very easily. Shailaja not being inducted as a minister is not going to pose any immediate threat to the party.

If they had done something like taking away the ministry from her before the elections, it would definitely have had an impact.

It is another matter that she would have performed well in any other ministry because she does her work well.

Of course, there will be resentment and these days, the letting of steam is done on social media, and you have started seeing that already.

So, there is no question of K K Shailaja rebelling against this decision....

No...no... She will not raise any issue on this. She will say I will abide by the party's decision.

Do you feel she will be pushed to oblivion?

Yes, that's what is going to happen to her.

In the case of Gowri Amma, her background was different. So, she revolted and came back.

It was the party that used her name to come to power in 1987 and then pushed her back.

But this is 2021, and we see the same thing happening to another woman...

It is one party where patriarchy works in a very extreme level.

If you take the case of Gowri Amma as the example, her role in the party was recognised in the beginning and she was made a minister in the 1957 ministry.

She was made in charge of the Kerala Karshaka Sangham (farmers' group) and Kerala Mahila Sangham (women's group) at the state level for almost 20 years, but that did not earn her a place in the central committee.

It is one party that had prominent women leaders before the state of Kerala was born.

It is also the party that started the Progressive movement.

But by the seventies, the status of women started coming down.

That's why I compared Gowri Amma's rise to the rise in the status of women in Kerala.

When women were being denigrated, her status also started going down. 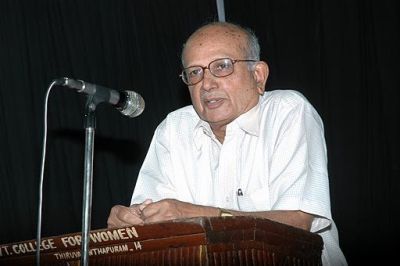 You mean, what has happened to K K Shailaja is a reflection of Kerala society?

Yes. It reflects the changes that has come about in Kerala society in the last 50 years.

Another thing is, gender parity is not a serious issue in Kerala society today.

I am of the opinion that EMS is responsible for bringing back feudal values into Kerala society.

While leaders like A K Gopalan, V Krishna Pillai etc were associated with the social reforms movement for social equality, EMS was only involved with the reforms in Namboodiri society where special equality was not an issue.

The setback in Kerala society started with the formation of the Communist government in 1957.

The effects of the Progressive movement were there only till 1957.

The formation of the first Communist government brought out all the conservative elements into the public space.

The result was the Vimochana Samaram (Liberation struggle) against the elected Communist government by the Catholic church in Kerala, the Nair Service Society and the Indian Union Muslim League.

In 1959, the Communist government was dismissed (by the Jawaharlal Nehru government in New Delhi).

I see the period between 1959 and 1970s as a stalemate. It was during this period that the Communist party started losing its progressive face.

We have reached a stage where there is no difference between any political party.

That's why I feel what has happened to Shailaja is a setback to the very idea of gender parity. 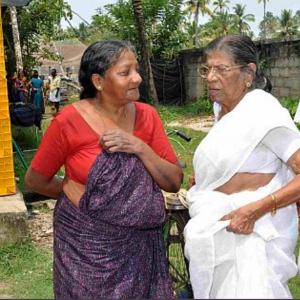