News
Business
Movies
Sports
Cricket
Get Ahead
Money Tips
Shopping
Sign in  |  Create a Rediffmail account
Rediff.com  » News » 'In 11 months, India has been pushed back by several decades'

'In 11 months, India has been pushed back by several decades'

'Tell me, what is more important to Modi -- his position as prime minister or as an RSS pracharak?'

'We feel he gives priority to his position as an RSS pracharak. Otherwise, why did he not agree to go to Parliament as the prime minister of the country and air his opinion on ghar wapsi as demanded by the Opposition?' Pinarayi Vijayan is the most powerful Communist in Kerala.

Even though he has given up the state secretary's position -- Koderi Balakrishnan, another member of the Communist Party of India-Marxist's Kannur clique, which dominates CPI-M politics in the southern state -- Vijayan retains his influence and power.

Sitting in a small room reserved for a party worker at the CPI-M's Kerala headquarters at the AKG Centre in Thiruvananthapuram, Vijayan discussed with Shobha Warrier/Rediff.com the Modi Sarkar and the condition of his party, which some observers feel has declined beyond relevance.

Your party has a government only in Tripura. In the Lok Sabha, you don't even have a double-digit number. What is the reason for this crisis for the CPI-M?

The Left had been very strong in Kerala, West Bengal and Tripura. Yes, we are facing difficult times in West Bengal, but our party is working hard to come out of the crisis. The crisis we faced there had repercussions in other places.

Is it not worrying to be on the verge of losing national party status?

We are confident of overcoming this. At the party congress at Visakhapatanam, we raised this question. When a party faces such a situation, it is necessary that we discuss it openly and look for a solution.

The CPI-M's decline began after Prakash Karat took over leadership of the party. Do you feel it is because the party does not have leaders from the grass-roots in Delhi? Theoreticians cannot be mass leaders.

Not at all. Our leadership understands the diversity of our country well and are capable of taking decisions appropriately.

It is true that earlier, we had very tall leaders to lead the party, but they are no more now. You cannot say that today's leadership has any drawbacks.

All these leaders entered active politics after their studies and all of them were part of student politics as well. It is not that they became top leaders one fine day; their political studies started when they were young, and when they were students.

If you look at Prakash Karat's initiation into politics, he worked closely with Comrade AKG (Ayillyath Kuttiari Gopalan, the legendary Communist and the first Leader of the Opposition in Parliament) who understood the problems of the downtrodden and worked for them.

Karat had the good fortune to travel with AKG to many places in India and understand the real problems people face.

None of our top leadership lacks experience. 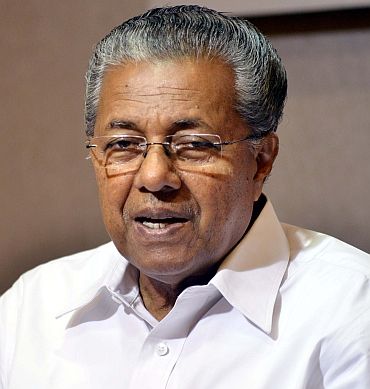 In a globalised open market economy, what is the relevance of the Left?

Only the Left has relevance in today's world. The neoliberal economic situation has arisen due to globalisation. The only ideology that can help the world come out of this crisis is the ideology put forward by the Left.

If you look at the communal situation in our country also, only the Left takes the right decisions.

Because the relevance of the Left is more today, we want to unify all the Left parties and strengthen our ideology.

We also want to involve those who agree with our ideology.

The most successful economy in the world, China, became a success after it discarded Communism.

You need not look at China that way. They have taken decisions that are good for the country and the people.

They themselves admitted that the country was suffering from poverty, hunger and unemployment, but today they are able to come out of all these.

To bring about progress and development in the country, they had to follow a new path, but they say it again and again that when something happens to destroy the Communist movement, they would curtail it.

Even in India, those who believe in a liberalised economy assure the people that there will be a trickle down effect and the poorest of the poor will benefit from it...

But where is it happening?

Did we not see problems in the so-called liberalised economies of the world -- Europe and America?

Did we not see people coming together to agitate against liberalisation there?

These agitations did not succeed because they did not have proper organisations like the Left to guide them.

The Latin American countries have refused to follow this kind of an economy. So you cannot say that the liberalised economies are flourishing and capitalism is gaining power.

Globalisation is not a loved word today. Slowly, people all over the world are realising that globalisation will not do any good to society, and it is true in the case of India also.

Have we not seen our workers uniting to fight against capitalism and globalisation?

Was it not after 1991, after liberalisation, that the Indian economy started growing at a faster rate?

Yes, there are more billionaires in India today. You talk about a growing economy pointing to these billionaires. But even today 85 crore (850 million) people in India earn only Rs 20 a day. Is it a matter to be proud of?

Do you think it is because of such disparity that we see Naxalism on the rise in many parts of the country?

That is because of localised problems in certain areas. Some areas in our country are very backward and Maoists exploit this situation.

Maoists use the people of the area as security cover and work. I do not think we should encourage them.

The path chosen by them is not right and they are people who have blind enmity to Communism. They consider the CPI-M and other Communist parties as their bitter enemies. So, we can never agree with them.

You spoke of poverty and the lack of opportunities for the workers and the poor. Do you think the 'Make in India' campaign will help them?

It is only propaganda. This government has been doing a lot of such propaganda, but look at the condition of the poor in India; they are suffering because of price rise.

Has this government done anything to control price rise? On the other hand, they are planning to sell the shares of Public Sector Enterprises.

How do you assess the Modi Sarkar?

In the last 11 months, our country has been pushed back by several decades.

Tell me, what is more important to Modi -- his position as prime minister or as an RSS (Rashtriya Swayamsevak Sangh) pracharak?

We feel he gives priority to his position as an RSS pracharak. Otherwise, why did he not agree to go to Parliament as the prime minister of the country and air his opinion on ghar wapsi as demanded by the Opposition?

The government today functions the RSS way, and it is a danger to the secular atmosphere of the country. 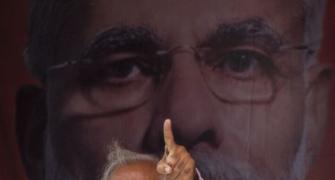 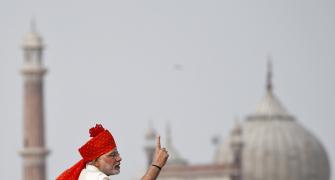 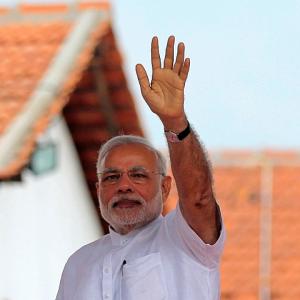 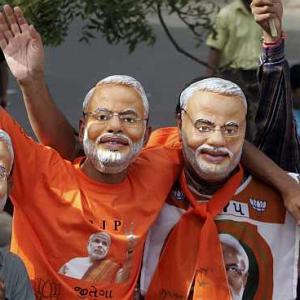