News
Business
Movies
Sports
Cricket
Get Ahead
Money Tips
Shopping
Sign in  |  Create a Rediffmail account
Rediff.com  » News » '2019 won't be as easy for the BJP as it was in 2014'

'There is core BJP support on the Hindutva line. It will continue.'
'Along with that, the BJP is ready to play the OBCs trifurcation card to its benefit.'
'If you see the post-Kairana result, the BJP spokespersons and IT cell have already begun talking about Hindu unity against Muslim unity, Ram vs Allah.' As the Bharatiya Janata Party enters its last lap before its term ends, its formidable citadel is not as strong as it was when the party came to power four years ago.

Its defeat in the recent Lok Sabha by-elections in Uttar Pradesh -- most recently in Kairana last week -- and the mounting anger among the country's farmers has sent worrying signals to the BJP leadership.

"The BJP's big brother attitude and naked communalism by its frontal organisations has galvanised the Opposition for their survival," Professor Manzoor Ali -- an observer of UP politics at the Giri Institute of Development Studies, Lucknow -- tells Rediff.com/Archana Masih.

What does the Kairana by-election result mean for the politics of UP and the rest of India?

At both levels, the result gives hope for democracy and the secular polity. It would give an impetus to the social and political coalition in various states.

The most significant states would be UP and Bihar which have 120 seats.

The social coalition could certainly give a strong fight to Brahminical and communalist forces in both states.

Does the Kairana result cast a shadow on the UP chief minister's ability to win elections in his own state when he is perceived as a star campaigner for the BJP in other states?

Winning seats in electoral politics is about gathering the numbers.

What the BJP has done in 2014 and 2017 was a broader social alliance at the local level, which gave it winning strength.

The BJP and Yogi (UP Chief Minister Ajay Singh Bisht also known as Yogi Adityanath) have still managed those social alliances in the state.

Castes like Lodh, Valmiki, Kurmi, Saini, Jat (part of it) and Hindu upper castes are still intact with the BJP.

That is also reflected in the Kairana by-poll, where the BJP candidate got a 47% vote share.

The problem with Yogi and the BJP is that the new Oppositional alliance is proving bigger than theirs (alliances).

Muslim, Dalits and Yadav are 20, 20 and 9 percent of UP's population respectively. This is formidable across the state.

The BJP won 2017 (the UP assembly election) because these votes were divided.

Yogi will remain the Hindutva mascot, not of development, till 2019.

Who do you think is responsible for the Kairana defeat?

The BJP applied all its resources in Kairana. It organised Gujjar and Jat Mahapanchayats. It also brought Jinnah into the scene.

They tried to make it Hindu unity versus Muslim unity. But everything failed as two major social groups in the area came together -- the Muslims and the Dalits.

There are 540,000 Muslims and 250,000 Dalits. Part of the Jats too voted in favour of the alliance as the candidate (Tabassum Hasan) has the RLD (Rashtriya Lok Dal) political platform.

The Muslim Gujjars -- who had mostly voted for the BJP candidate, the late Hukum Singh, a Gujjar leader -- due to community solidarity, the communal environment forced them to vote for the alliance candidates.

So, local and state level issues have been responsible for the BJP's defeat.

Kairana, Muzaffarnagar and western UP was where Hindutva politics was ruthlessly exploited and polarised voters in the Lok Sabha and assembly elections. Has that level of Hindu-Muslim polarisation/tension subsided now?

No and yes, both. No because the BJP managed to polarise this election to consolidate its vote base.

The Lodh, Valmiki, Saini, and some Jats still voted for the BJP.

Yes because there has been effort by the community leaders from the Jats negotiating with the Muslims to withdraw the police cases that were registered after the Muzzafarnagar riots.

Also, the cane prices issue brought the communities together.

Many feel this result is a jolt for the BJP, but the BJP has shown that it can win state after state.
Why, then, do wins in by-elections by the Opposition parties become so significant when it has been proved that BJP can win most of the big elections?

You have to understand two circles that are in the process.

One, where the BJP is entering new areas with promise of development such as Uttar Pradesh, Bihar, Rajasthan, Haryana, Karnataka, Jharkhand etc.

Here, in multi-polar contests and with the division of secular votes, the BJP has outdone its opposition.

Second, where the BJP itself is in power, they are about to lose or losing, especially MP and Rajasthan.

The BJP's big brother attitude and naked communalism by its frontal organisations has galvanised the Opposition for their survival.

What do these by-poll results mean for Mr Modi and the BJP in 2019?

It is not going to be easy for the BJP and Mr Modi.

The central government has failed in many of its promises, especially in creating jobs, stopping corruption and securing communal harmony.

There is no 'Sabka Saath, Sabka Vikas'.

Individuals and groups have started protesting despite the close watch from the government.

If you do not deliver, the people will.

What strategy do you see the SP, BSP, Congress and RLD using in 2019?

The Congress has already approached the BSP for the Madhya Pradesh (assembly) election.

The joining of the Congress and RLD would be a potential threat to the BJP.

Do you see Mayawati, Akhilesh, Rahul Gandhi, Ajit Singh being able to work together and put up a credible opposition to the BJP?

It is a matter of survival for all of them against the BJP's electoral and organisational machinery.

It is imperative for them to come together. The alliance would be more vital for the Congress and Ajit Singh's RLD.

Ajit Singh knows he has been reduced to nothing by the BJP as his social base drifted away.

He would certainly like to invoke (his late father) Chaudhary Charan Singh's legacy and autonomy and control over Jat politics.

What would be the weaknesses of such a coalition?

Seat sharing and the leadership issue of Uttar Pradesh. Akhilesh is not in the mood to leave UP.

Ajit Singh will go for a post in the Centre where the Congress will have premiership.

Now, Mayawati has to negotiate for a respectable position. She has already been asking for 40 seats in Uttar Pradesh.

Jinnah was raked up as a poll issue, but it seem to have backfired.
Will some other divisive agenda be exploited in 2019?
Or will political parties focus on issues like 'ganna' (sugarcane) and farming concerns rather than religion?

In 2014 (the general election) and 2017 (the UP assembly election) the BJP employed development as a superficial vote catching tactic very effectively.

However, beneath that, caste equations and communal polarisation have been used to garner votes.

There is core BJP support on the Hindutva line. It will continue.

Along with that, the BJP is ready to play the OBCs trifurcation card to its benefit.

If you see the post-Kairana result, the BJP spokesperson and IT cell have already begun talking about Hindu unity against Muslim unity, Ram vs Allah.

How has UP changed in the one year under Yogi Adityanath?

In the name of maintaining law and order, the state government has sanctioned selected police killing of petty criminals belonging to the OBCs and Dalits.

In the name of cow protection, the police has arrested juveniles. Sometime upright policemen have to face the brunt of right-wing mobs.

Killing of lawyers and businessmen are not taken seriously.

In the name of the UP summit, citizens have been made false promises of investment.

A united Opposition was able to defeat the BJP in UP's Lok Sabha by-elections, but the BJP has a major chunk of the votes and remains a formidable force.
How can the Opposition take on Mr Modi and the BJP?

I think the Opposition should and must go with the positive agenda of jobs for youth, safety of citizens, agricultural distress, black money, bank NPA issues.

The BJP has no answer to these issues. 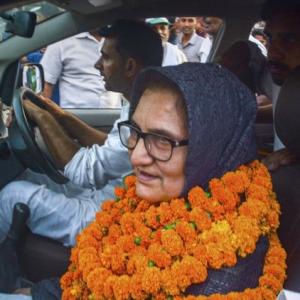