Why are Indians so nasty online?

Arguments about politics and religion don't end in name calling and abuse when they happen face to face.
In person we are more balanced because we are aware we are being observed, says Aakar Patel.
Illustration: Dominic Xavier/Rediff.com 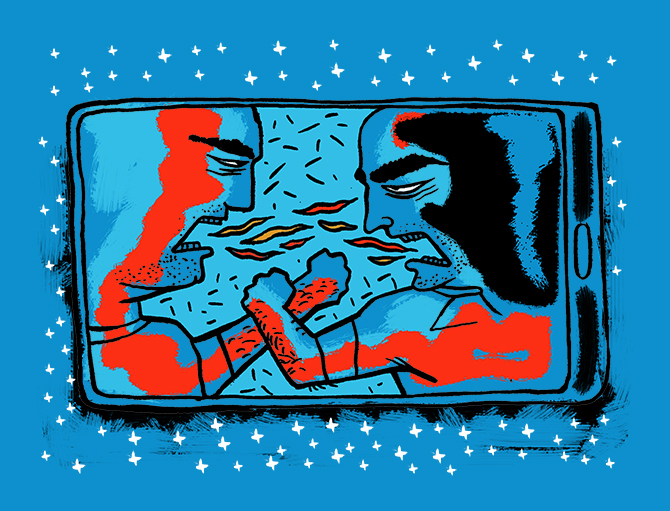 Like our former prime minister Manmohan Singh, former US president Barack Obama is an intellectual the world respects.

It doesn't matter that a few people think that the two are failed leaders, either because they lacked charisma and personal power, like Singh, or because they came from a racial minority, like Obama.

They are brilliant individuals and though they speak not as often as other leaders, it is inevitably rewarding to listen to them when they speak.

A few days ago Obama gave a wonderful interview to Britain's Prince Harry. In this he spoke about social media and some aspects of its affect on the modern world.

Obama accepted that social media was a really powerful tool for people of common interests to convene and get to know each other and connect.

Having said this, he added: 'But then it's important for them to get offline, meet in a pub, meet at a place of worship, meet in a neighbourhood and get to know each other.'

And the reason he said this was 'because the truth is that on the Internet, everything is simplified and when you meet people face-to-face it turns out they're complicated. One of the dangers of the Internet is that people can have entirely different realities. They can be cocooned in information that reinforces their current biases.'

I think Obama has captured something essential about the way we use the Internet. I am personally not on social media because I find it too distracting. However when I sometimes go through the comments sections of online articles I get depressed.

The amount of anger and viciousness and intemperate language is enough to put off anyone.

However the truth is that this level of nastiness is not observable in our everyday lives. Arguments about politics and religion do not end in name calling and abuse when they happen face to face.

It is the anonymity of the Internet that somehow gives us the confidence to say strong things. In person we are more balanced because we are aware we are being observed.

And, of course, the other great point that Obama makes is that on the Internet we are not exposed to the other person's point of view unless we specifically choose to seek her or him out.

In real life, when we engage with someone we must also listen to them and this makes our certitude and our prejudices less assertive.

There are some takeaways from this insight that Obama has given us.

First, that it is important particularly for people like activists and politicians, who seek change through their work, to meet and engage with people outside the Internet.

A few weeks ago Jignesh Mevani came to the place I work and spoke about his perspective and his ambitions. Asked about electoral politics, he said that it was not a short term goal but winning was something he saw happening a decade or 15 years down the line.

I am not sure even he knew that only a few days later he would easily win as an independent in the most divided state of India. How did his happen, particularly in a two party state where he did not have the advantage of an election symbol and had to rely on his own credibility?

I suspect it happened in large part because Mevani, who is a smart and persuasive speaker, engaged with thousands and thousands of people in person.

Similarly for a human rights activist like me, it is vital that there be maximum physical engagement in the flesh with people. I am saying this specifically because in the world of activism the focus is on social media because it is the most efficient way of reaching large numbers of people. But it is also, as Obama has observed, polarised in an artificial way.

If one is working on the rights of marginalised groups like Muslims or Dalits or Adivasis or Kashmiris or the people of the North East, the knee jerk response is to uphold the rights of the army and of the State over the rights of citizens.

This false binary is perpetuated more easily on the Internet. It is not as easy to dismiss the concerns of another human being in person.

And finally, Obama's insight tells us that we should not allow ourselves, as I do so often, to lose hope about the way things are.

We will close by noticing that Obama did not mean to say that social media was all bad.

'The question has to do with how do we harness this technology in a way that allows a multiplicity of voices, allows a diversity of views, but doesn't lead to a Balkanisation of society and allows ways of finding common ground,' he said.

Terrific words which we should remember in 2018, a crucial year for India.